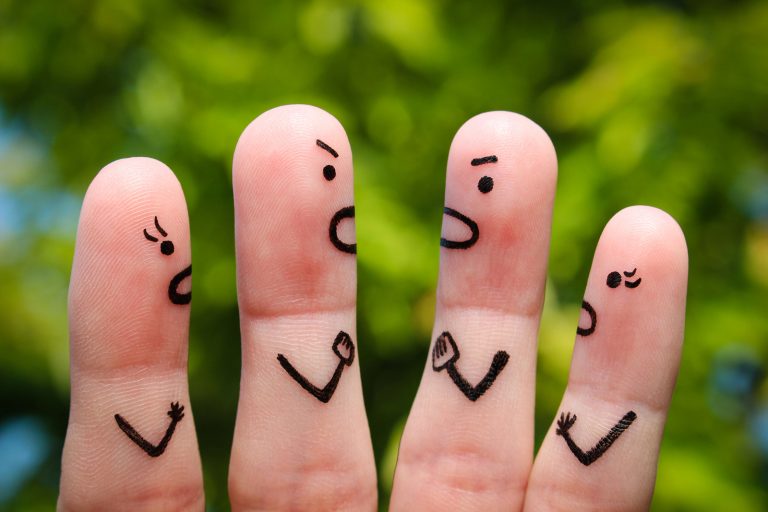 Can We Please Stop Fighting?

Ever since the U.S. Presidential Election, I have seen friends give up on Facebook. I know others who have severed ties with family members. Thousands of people are afraid to express their opinions for fear of reprisals. I know people who were scared to put political signs in their yards, for fear of having their houses egged. It’s as if we’re in a civil war—and, of course, it is anything but civil.

Social media has fanned the flames, allowing vulgar slurs and name calling to blast back and forth, all intensified by the so-called anonymity of the internet. Divisions, cyberbullying, persecutions of those who hold other views, even violence and rioting—I never thought I would see conflict engender such extreme emotions, even hatred.

The recent U.S. Presidential Election is just one more lens through which we can view the widening gap of opinions. But it started long before any candidates ever debated. It’s been growing for at least a decade, as courtesy and respect have waned. Years ago “disagreeing without being disagreeable” was a goal, a virtue. Today we see little attempt to be tolerant or considerate of others’ views. Today you can slam someone, and slam them hard, just because they have a different idea than you have.

Look at the nasty comments left on Yelp, about a bad meal someone had. Suddenly they’re leaving their condemnation of the entire restaurant in a blistering attack, just because the waiter forgot to refill their water fast enough.

Someone will say they liked a certain movie and others will call them a moron, a loser, a person without a brain in their head. You see scathing condemnations over such inconsequential preferences as what car to drive, where to vacation, and what to take for that flu bug that’s going around.

Can we really not allow for varying opinions? Most of the statements I see aren’t even based in fact, but are truly expressions of preference. Yet the speaker states them as indisputable truths from on high. And if you challenge these declarations, you’re cut off.

Even in the field of politics, please let’s allow for the open discourse our forefathers valued. Let’s allow everyone to speak their mind, and disagree politely, if we truly must disagree.

Satan, of course, is not going to let this angry moment pass him by. He’s going to capitalize on it as best he can. He thrives when contention drives the Holy Ghost away, and every angry retort we offer, every judgmental conclusion, plays right into his hands.

Here are seven ways I recommend for coping with the storm tossed seas we are sailing in at the moment, and restoring calm waters again:

When someone says something inflammatory—they blast your candidate or your political view—don’t see this as a moment to educate. Don’t feel you are personally required to charge in and defend. Instead, seek to understand. Is this hard to do? Let me be clear: This is extremely hard to do. But if we ever hope to restore peace, we must roll up our sleeves and do it. Instead of arguing back, ask clarifying questions– SINCERE, clarifying questions. “What makes you feel that way?” “Tell me why you don’t trust him/her.” Come from a position of love, really wanting to know why your friend holds that view.

Often it helps to use the old psychologist’s method of rephrasing their opinion and offering it back to them, to see if you have it right. “So you’re saying you think the country is going to suffer because A, B, and C?” This works when reasoning with family members, too. “You feel you’re old enough to be given more latitude, and set your own schedule, is that what I’m hearing?” Rather than jumping in with what you are sure is Absolute Truth (but which you know will escalate the quarrel), seek to see things from their perspective.

Another way to turn down the heat is to express affection. “You know I’ll love you even if we disagree on this. You do know that, right? Because there’s nothing you can say or do that will ever make me stop caring about you.” How many people love you that unconditionally? And how about the person you’re speaking with—would they like to know you’re in their corner? Part of this message is that each one of us is a child of God, and is so much more than their opinion on one topic.

A fourth way to diffuse hostility is to find common ground, and don’t get pulled into the fray. If you know Cousin Joe is going to go off on his latest rant, get there ahead of him and talk about things you both agree on—from a favorite ice cream flavor to hobbies to pets to sports—find areas where you can come together, instead of divide.

Fifth, back down on your own passions that tend to rub everybody raw. We all know folks who want everyone to eat the way they do, exercise the way they do, raise kids the way they do—and never tire of correcting those around them. Don’t be that person. Allow others to breathe, to think, and to formulate their own ways of navigating life’s options.

Sixth, carefully examine your opinions before you spout them. Haven’t you looked back with chagrin at some of the things you believed in high school, just because you heard a rumor? But you were too young to know how to really research the issue, so you just believed what you heard. On January 10th of this year, BYU President Kevin J. Worthen gave a terrific talk called “The Pursuit of All Truth,” and spoke about people “limiting their pursuit of truth to only those sources that support their views.” I’ve been guilty of this, myself. I like hearing commentators and pundits who share my opinions—I think we all do. But we need to catch ourselves and make sure we’re hearing the other side as well, particularly in matters of opinion, not fact.

President Worthen then spoke of those who seal “themselves off from any meaningful dialogue with any who have different viewpoints.” And this is what I’m seeing today—brittle intolerance of other ideas, other ways of seeing things. People who refuse even to mingle with those who disagree with them, soon find themselves out of touch with their fellowman, living in a house of mirrors, alone with angry, like-thinkers.

Of course, none of this is to say that we should bend all rules and open our minds to gross distortions of gospel truths, shrugging our shoulders and opening the door as wide as we can to accommodate evil. God’s truths are not in the category of opinions.

Last, when those you know summon the patience and courtesy to listen without attacking, let’s praise that. Let’s give accolades to those who can maintain civility and allow others the respect they deserve as our brothers and sisters. When you know someone holds another view—and also holds their tongue—thank them. Express admiration for the example they’re setting. And then let’s do the same. Our response to conflict reveals our character. Let’s live with peace and dignity.

But every conflict is not about evil. And Jesus promised that we could be peaceful and have peace in within world of evil. Those who think like the poster above may never see external peace; but that doesn't mean others cannot see, find and choose peace in their interactions in this world.

There is so much FAKE news today. Make sure you verify sources before you jump to conclusions.