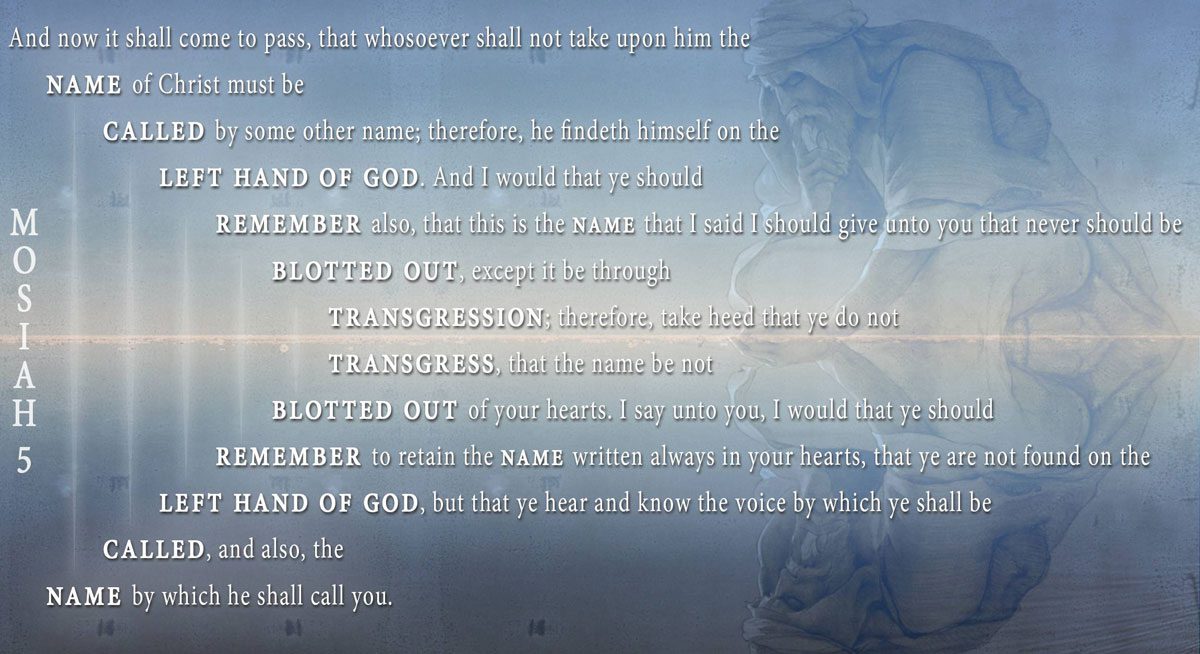 This is the name that I said I should give unto you that never should be blotted out, except it be through transgression; therefore, take heed that ye do not transgress, that the name be not blotted out of your hearts. I say unto you, I would that ye should remember to retain the name written always in your hearts, that ye are not found on the left hand of God.
Mosiah 5:11–12

Thanks to the work of scholars like John W. Welch, many people are aware of the idea that chiasmus appears in the Book of Mormon.[1] However, if one assumes that the Book of Mormon was written in another language and translated into English, would one expect that structures like chiasmus would survive translation?[2]

Chiastic patterns do survive translation, but not all the time. In fact, one reason it is unlikely Joseph Smith was aware of chiasmus is because the pattern is sometimes less obvious in the King James translation than in the original Hebrew or Greek.[3] Similarly, Allen J. Christenson, a scholar of Mayan literature, found it difficult to preserve chiastic and other native literary structures in his standard translation of the Popol Vuh, compelling him to do a second translation that slavishly follows the native syntax in order to preserve the literary qualities of the text.[4]

Still, chiasmus and other forms of parallelism can and do survive translation into other languages. Chiasms like those found in Mark 2:27, for example, are evident even in translation. Indeed, as is not the case with many poetical features such as rhyme or meter, chiasm and other forms of parallelism may be the most likely to survive translation. In the Greek translation of the Old Testament, called the Septuagint, the parallels are just about as obvious in the Greek translation as they were in the original Hebrew. In fact, sometimes they were even clearer in Greek than in Hebrew.[5] Many skilled translators today make efforts to preserve chiasms and other structural features of texts when rendering them into modern languages.[6]

It is even possible that the “preservation of literary structures” in translation “is arguably more accurate than the vocabulary,”[7] for the human mind can easily process patterns and can communicate structures in a way that is not directly connected to language. “The translation of those structures into English clothes [them] … in a modern vocabulary, but … their meaning [is] preserved.”[8]

Translation impacts questions of chiasmus in more than one way, however. Just as some patterns can be lost in translation, it is possible that others are actually the product of translation. The distribution of chiasmus and other parallel patterns throughout the text, however, does not appear to be random—as would be expected if chiasms were the accidental product of Joseph’s translation efforts. For example, Welch has noted that Helaman through Moroni has fewer chiasms than the rest of the Book of Mormon.[9]

Carl Cranny has more recently documented how the presence and absence of chiasmus and other forms of parallelism follows the expected patterns of a genuinely ancient document.[10] If chiasmus were just a result of the translation process, this would not be the case, since Joseph Smith translated the entire book. Therefore, it is unlikely that chiasmus in the Book of Mormon was a result of translation, but was actually something on the plates themselves that survived the translation process.[11]

Understanding how chiasmus and other literary features can survive translation offers some insight into the translation process.[12] As John W. Welch observed:

Evidently, his translation was consistent. Each time a word appeared within a given framework, it seems to have been rendered by the same English word. Otherwise, structures such as Mosiah 5:10–12, Alma 41:13–15, and others would not have survived through the translation process. … [I]n many cases, it is possible to see that an internally consistent result was produced in the English text, presumably by virtue of a relatively literal and consistent method of translation from the ancient record.[13]

The realization that chiasmus does not always survive translation, however, is also important. Welch lamented, “Of course, it is impossible to know how many other parallelisms or other literary features might have been lost in the translation process.”[14] This understanding should make us keenly aware of the limitations we face in studying a translated text, like the Book of Mormon, from a literary perspective. Many elements of ancient texts do not survive translation very well, meaning that we are unable to fully appreciate some of the subtle craftsmanship of the text.[15]

While we may regret the likely loss of some of the literary structure and beauty of the Book of Mormon due to translation, this should not detract from our appreciation of the hundreds of chiasms and other poetic parallelisms that did survive and are available for us to study.[16] In fact, to the contrary: it should deepen our appreciation. The survival of chiasmus in the English translation of the Book of Mormon gives us a window into the past and allows modern readers to experience the literary artistry of the ancients almost as though they were reading those texts alongside those ancient writers and in their original languages.[17]

Being able to see how these authors used creative patterns to express their ideas allows readers to better relate to them, even if they may, at times, seem far removed from our own time and culture. Moments like these allow the reader to connect with these ancient authors in new and meaningful ways.[18] In addition, the preservation of chiasmus in translation allows us to understand the text in a way similar to the way the ancient authors would have understood it.[19] This allows the message of the Book of Mormon to come through more clearly and have an impact on us hundreds of years after the text was first written.[20]

John W. Welch, “What Does Chiasmus in the Book of Mormon Prove?” in Book of Mormon Authorship Revisited: The Evidence for Ancient Origins, ed. Noel B. Reynolds (Provo, UT: FARMS, 1997), 199–224.

[2] For a comprehensive list of proposed chiasms in the Book of Mormon, see “Chiasmus Index,” at Chiasmus Resources, online at chiasmusresources.org.

[11] Gardner, Gift and Power, 204, similarly concluded: “These structural elements are not random, nor were they part of the common repertoire available to a writer in upstate New York in the 1830s. They represent features of the plate text that have survived the translation process.”

[16] For an example of this, see Donald W. Parry, Poetic Parallelisms in the Book of Mormon: The Complete Text Reformatted (Provo, UT: Neal A. Maxwell Institute for Religious Scholarship, 2007). Altogether, Parry displays 1600 examples of 23 different forms of parallelism in the Book of Mormon.