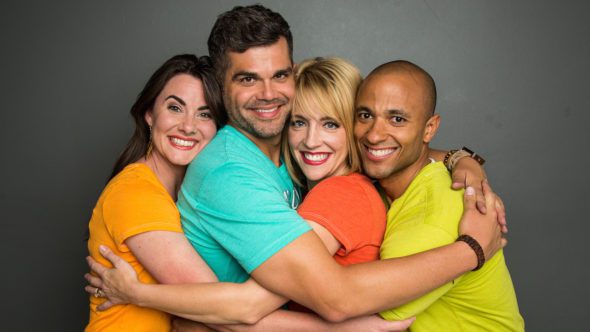 BYUtv announced Tuesday that “Random Acts,” its unscripted half-hour hidden-camera show that highlights the altruistic nature of human beings by featuring real people who are the recipients of random acts of kindness, is returning for a third season on a new night, Tuesday, April 3 at 9pm ET/7pm MT. As news headlines continue to focus on the misfortunes in our world, this original reality show continues to ease burdens and brighten lives for people who are as deserving as they are surprised.

This season, “Random Acts” teamed up with Reader’s Digest, America’s Most Trusted Magazine, to identify the Nicest Place in America, a place where kindness is the golden rule. The series filmed two segments in this year’s winning city, Gallatin, Tennessee, that will be featured on season three.

“As we continue with our initiative to bring family entertainment and purposeful programming to our viewers, season three of ‘Random Acts’ exemplifies all that is good in people,” said Michael Dunn, managing director of BYUtv. “Partnering with Reader’s Digest further emphasizes our efforts to illustrate that generosity and kindness are the forces behind this show and each act continues to prove that there is good in the world.”

Watch the team help a little girl live her dream (from Season 2):

Some of the random acts [of kindness] featured in this new season include hosting an authentic high school graduation ceremony for a physically challenged home schooled student, producing a musical surprise for a dedicated and passionate 3rd grade teacher, providing a family with a special home makeover for their disabled son and creating a once-in-a-lifetime musical performance opportunity for a young amputee.

In addition, the hosts seek out unknowing individuals and invite them to complete an act of kindness. Hosted by YouTube comedic sensation Will Rubio, actresses Emilie Starr and Lisa Valentine Clark, and comedian Stephen Jones, a number of notable collaborations will emerge throughout the series, including with popular YouTube/Instagram sensations The Piano Guys and Zumba Queen Emily Engemann. The 10-episode show also received overwhelming support from local businesses around the country such as the Utah Jazz, the Nashville Farmers Market, Park City Mountain Resort, Utah Community Action Center, Madame Tussauds Nashville, Alt Summit, RC Willey and Dixie State University.

The hosts will be joined by a team of do-gooders who create scenarios in which unsuspecting people’s characters are tested and their varied reactions are captured on camera. Back for his third season, Rubio is known for bringing positive entertainment to the masses through his comedic YouTube channel. He has appeared in national commercials for Kellogg’s, Volkswagen, Subway and Little Caesars, and had guest-starring roles on the comedy television series “Community,” as well as Amazon’s Emmy® award-winning series “Transparent.”

Watch this positive grocery prank from a previous season:

Starr studied Musical Theatre at Weber State University and works at the Salt Lake Acting Company, as part of their Audience Development and Communications team. Her previous non-profit work with charities like Outreach Resource Center for Homeless Youth, The Red Fred Project, and Musical and Memory Coalition, make her the perfect conveyer of kindness for “Random Acts.” Jones has appeared in various television shows and commercials for Old Spice, Verizon, Adobe, Dyson, Nordic Trak and Gold’s Gym, and Clark starred in the hit independent movie “Once I was a Beehive” and was the executive producer, writer and lead actor in the award-winning web series “Pretty Darn Funny.”

BYUtv commissioned production house London Road to produce this season of “Random Acts.” Tom Morrill will return as producer, along with Sam Wallace and Damien Bear.

In addition to “Random Acts,” BYUtv’s original programming slate includes the long-running sketch comedy series “Studio C,” which touts over 1 billion views on YouTube and “Relative Race,” the first family-history based competitive reality show that follows four teams as they meet relatives linked by DNA for the first time in a race throughout the States. BYUtv is available in every state of the country via cable, satellite and multiple digital media platforms including byutv.org, AppleTV, Xbox ONE, Xbox360, Roku, Amazon FireTV, iOS and Android. For a complete listing of BYUtv’s spring programming visit www.byutv.org.

Owned by Brigham Young University, BYU Broadcasting operates BYUtv and BYUradio from its state-of-the-art production studios and distribution facility in Provo, Utah. BYUtv is a high definition cable television network that creates original programming the entire family can enjoy together, including sketch comedy, history, music and documentary offerings. The non-commercial station is available in more than 60 million households in every state on Dish Network, DirecTV and over 800 cable systems. It offers more than 1,700 hours of original programming, in addition to 500+ hours of live HD collegiate sports annually, and is streamed free of charge over the Internet at www.BYUtv.org.