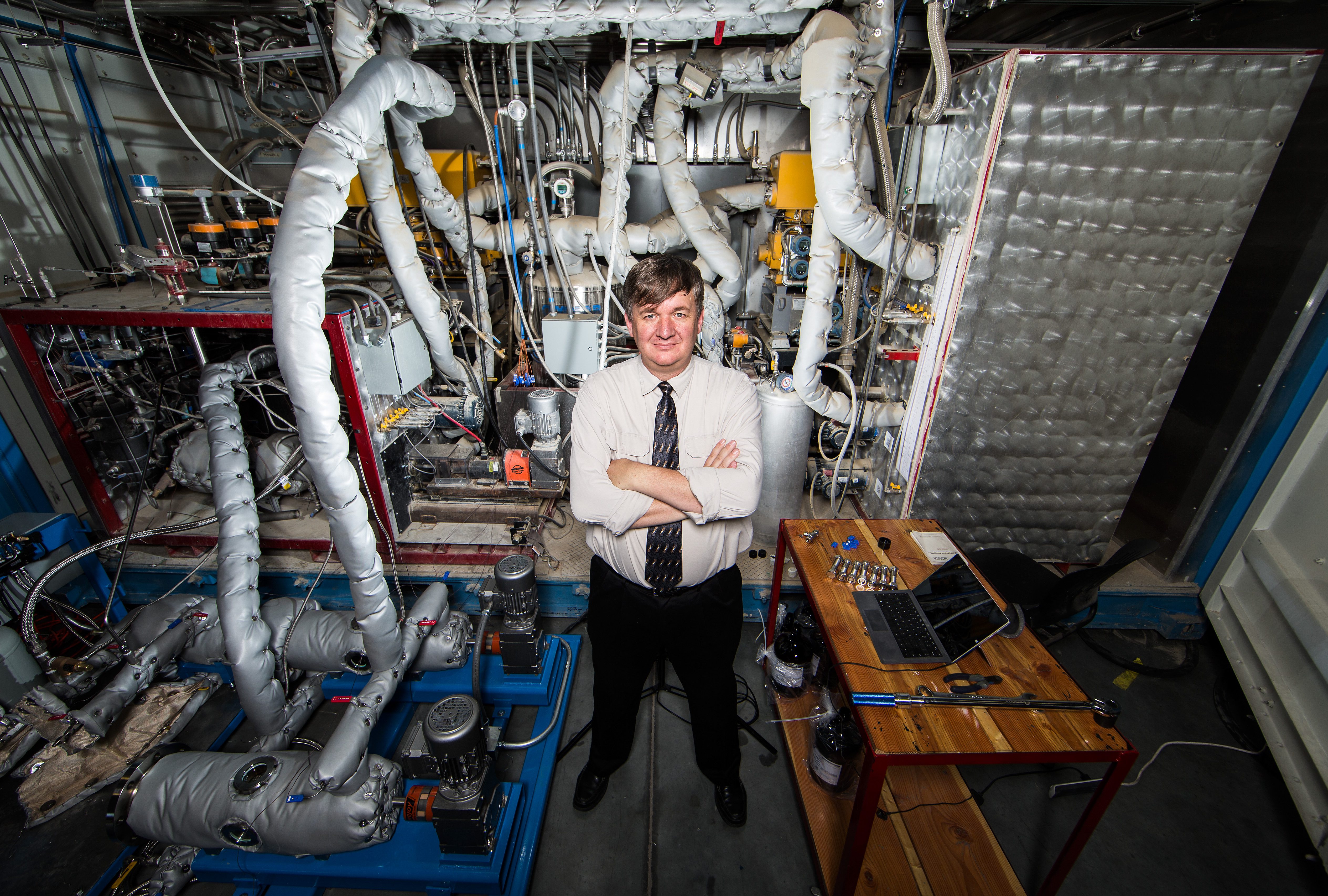 This August, President Obama announced an ambitious plan to reduce carbon dioxide emissions by 32 percent by 2030. BYU professor Larry Baxter is developing a technology that can actually do it.

Baxter, a chemical engineering professor, has created a system that separates carbon dioxide from other gases (and prevents it from escaping into the air) by freezing it.

And while there are other ways to curb carbon emissions, Baxter’s cryogenic carbon-capture system gobbles up 99 percent of the CO2 from emissions and costs half as much as conventional methods.

“We took a completely different approach,” says Baxter, who spun the research into a startup that is predominantly funded by government grants and employs BYU grads and interns among others. “What if we cooled down the gas to the point that the CO2 condenses out of the air?”

After his system freezes the CO2 with -130 degree Celsius temperatures, it separates the dry ice from the gas and heats everything back up. The CO2 is pressurized to become a liquid so it can be stored safely in underground aquifers or storage facilities for later use, such as enhanced oil recovery.

“Cryogenic separation of gases is not a newly discovered area of science, but what Dr. Baxter has done is develop a new approach to the process that significantly improves the energy and economic performance of cryogenic gas separation,” said Bauer, the former director of the National Energy Technology Laboratory.

In the latest of a series of publications on the process, Baxter provides a broad overview of the cryogenic carbon capture technology in a paper recently published in the International Journal of Greenhouse Gas Control.

While Baxter is confident in his technology, he hopes efforts to reduce carbon emissions in the U.S. will spur other nations to follow suit.

“Any real solution to this problem needs to be a global solution,” Baxter said. “Even if the U.S. fully complies with this new regulation (EPA’s Clean Power Plan), you won’t notice a change if we’re the only country doing it.”

Currently there is only one full-scale power plant in the world doing carbon capture: a facility in Saskatchewan, Canada, a government-supported demonstration using conventional methods. Right now, typical power plants across the worlds are generating about 10,000 tons of carbon dioxide a day that goes directly into our atmosphere.

Baxter’s team is working on getting his technology to the pilot stage, which is five times the current size of his working unit and 100 times the capacity. He estimates having his tech in a full-scale commercial facility within five years and operating within seven years.

“This technology allows coal to continue to supply reliable energy while storing energy from intermittent sources and delivering it back to the grid at peak demand when it is the most valuable,” Baxter said. “The EPA doesn’t think it’s conceivable the U.S. is going to stop using fossil fuels, including coal and natural gas. It’s even less conceivable that the rest of the world will do so. If fossil fuels are to continue their roles in providing reliable, low-cost energy and if we are serious about addressing climate change, these technologies are going to play major roles in the future.”

This is a much better approach to reducing carbon emmissions than shutting down coal fired power plants. Inovation is much better than regulation. I am aware that there are tremendous uses for carbon fiber that has tremendous strength. If we combine the this technology of taking carbon out of the atmosphere and then make it into useful products we have effectively taken lemons and made lemonade out of them. My congratulations and encouragement to keep up the great work.

It seems to me that the energy consumption, on balance, will generate more CO2 than it reclaims from the .04% of atmospheric CO2. Would it not be more efficient to plant a tree!