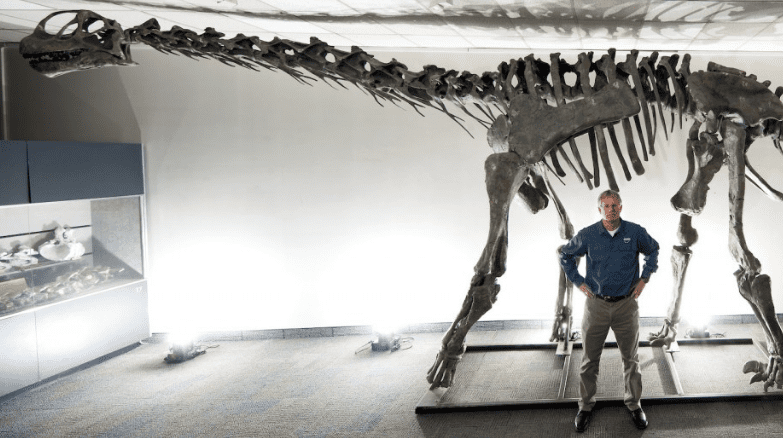 The following was written by Brooke Adams.

Move over, honeybee and seagull: it’s time to meet Moabosaurus utahensis, Utah’s newly discovered dinosaur, whose past reveals even more about the state’s long-term history.

The Moabosaurus discovery was published this week by the University of Michigan’s Contributions from the Museum of Paleontology. The paper, authored by three BYU researchers and a BYU graduate at Auburn University, profiles Moabosaurus, a 125-million-year-old dinosaur whose skeleton was assembled using bones extracted from the Dalton Wells Quarry, near Arches National Park.

BYU geology professor and lead author Brooks Britt explained that in analyzing dinosaur bones, he and colleagues rely on constant comparisons with other related specimens. If there are enough distinguishing features to make it unique, it’s new.

“It’s like looking at a piece of a car,” Britt said. “You can look at it and say it belongs to a Ford sedan, but it’s not exactly a Focus or a Fusion or a Fiesta. We do the same with dinosaurs.”

Moabosaurus belongs to a group of herbivorous dinosaurs known as sauropods, which includes giants such as Brontosaurus and Brachiosaurus, who had long necks and pillar-like legs. Moabosaurus is most closely related to species found in Spain and Tanzania, which tells researchers that during its time, there were still intermittent physical connections between Europe, Africa and North America.

Moabosaurus lived in Utah before it resembled the desert we know — when it was filled with large trees, plentiful streams, lakes and dinosaurs. “We always think of Moab in terms of tourism and outdoor activities, but a paleontologist thinks of Moab as a gold mine for dinosaur bones,” Britt said.

In naming the species, Britt and his team, which included BYU Museum of Paleontology curator Rod Scheetz and biology professor Michael Whiting, decided to pay tribute to that gold mine. “We’re honoring the city of Moab and the State of Utah because they were so supportive of our excavation efforts over the decades it’s taken us to pull the animal out of the ground,” Britt said, referencing the digs that began when he was a BYU geology student in the late ’70s.

A previous study indicates that a large number of Moabosaurus and other dinosaurs died in a severe drought. Survivors trampled their fallen companions’ bodies, crushing their bones. After the drought ended, streams eroded the land, and transported the bones a short distance, where they were again trampled. Meanwhile, insects in the soils fed on the bones, leaving behind tell-tale burrow marks.

“We’re lucky to get anything out of this site,” Britt said. “Most bones we find are fragmentary, so only a small percentage of them are usable. And that’s why it took so long to get this animal put together: we had to collect huge numbers of bones in order to get enough that were complete.”

BYU has a legacy of collecting dinosaurs that started in the early 1960s, and Britt and colleagues are continuing their excavation efforts in eastern Utah. Moabosaurus now joins a range of other findings currently on display at BYU’s Museum of Paleontology — though, until its placard is updated, it’s identified as “Not yet named” (pronunciation: NOT-yet-NAIM-ed).

“Sure, we could find bones at other places in the world, but we find so many right here in Utah,” Britt said. “You don’t have to travel the world to discover new animals.”

Back in the late 1970s either Steve Benson or Pat Bagley did a cartoon for the Daily Universe where a father and son were looking at the Allosaurus mounted skeleton cast then on display in the lobby of the ESC and the father explained that Adam needed something to keep the mice out of the Garden of Eden . . .

No, it is 6,000 year since Adam & Eve left the garden. Who knows how many years it took to create the earth and the life on it ?