“But what do the witnesses’ testimonies prove?” | Meridian Magazine 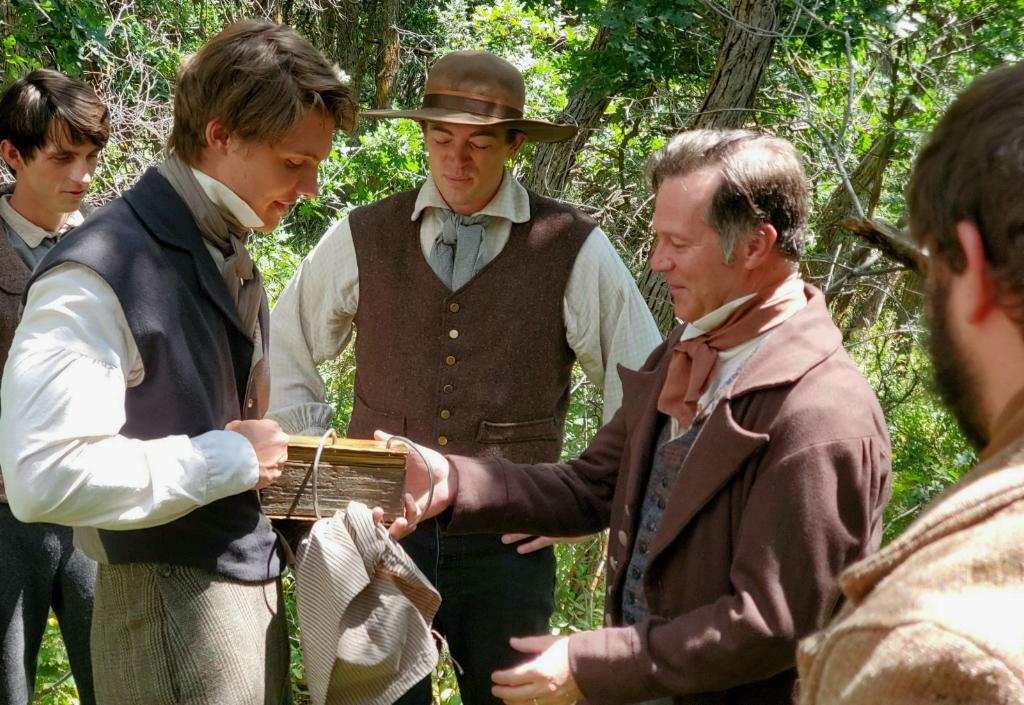 “But what do the witnesses’ testimonies prove?”

The usual response of critics to the witnesses of the Book of Mormon is simply to brush them aside without serious examination.  Mark Twain’s 1872 travel book “Roughing It” offers a witty but otherwise fairly representative specimen of the tactic:

“Some people,” Twain wrote, “have to have a world of evidence before they can come anywhere in the neighborhood of believing anything; but for me, when a man tells me that he has “seen engravings which are upon the plates,” and not only that, but an angel was there at the time, and saw him see them, and probably took his receipt for it, I am very far on the road to conviction, no matter whether I have heard of that man before or not, and even if I do not know the name of the angel, or his nationality either.

“And when I am far on the road to conviction, and eight men, be they grammatical or otherwise, come forward and tell me that they have seen the plates too; and not only seen those plates but “hefted” them, I am convinced. I could not feel more satisfied and at rest if the entire Whitmer family had testified.”

But Twain, of course, was a humorist, not a historian.  He wasn’t doing serious scholarly analysis; he was going for a quick laugh.

I would be happy, sometime, to discuss the suggestion that the family relationships among the various witnesses somehow justify rejecting their testimonies.  But that isn’t my topic today.  In the meanwhile, however, I recommend that those interested in that subject take a look at the article “Relationship of the Eight Witnesses of the Book of Mormon to one another” on the FAIR website (https://www.fairlatterdaysaints.org/answers/Book_of_Mormon/Witnesses/Eight_witnesses/Related#cite_note-1).

Here, I want to discuss another reason that is sometimes advanced for summarily dismissing the testimonies of the witnesses:  Their testimony, some say, is simply irrelevant.  Even if we accept it at face value, it proves nothing significant.

Suppose, one critic says, that somebody finds a coin.  The finder claims that it’s very old and very rare.  In order to confirm its age and its rarity, though, he would need to take it to one or more numismatists, specialists in the study and collection of coins.  It wouldn’t be enough for a group of his neighbors simply to get together and declare that they had seen it.  So what if they’ve seen it?  They’re not experts.  It might be a very common coin, or even a fake.  How would they know?

So, the critic continues, like the coin in the illustration the golden plates weren’t shown to experts, neither to metallurgists nor to archaeologists.  So how can we know that they were authentic?

We believers might point out that there were very few if any specialists in metallurgy or archaeology in the United States in the late 1820s, and there were almost certainly none in the vicinity of Palmyra, or Fayette, or Colesville, New York, at the time.  Not even the learned Charles Anthon and Samuel Mitchill, both of whom Martin Harris visited to seek their opinions, had the requisite training or expertise.

Nonetheless, the fact remains that the plates weren’t submitted to experts for authentication.  Instead, a number of local farmers saw them (along with several farm wives and farmers’ daughters, if we include the unofficial Book of Mormon witnesses).  The Eight Witnesses, it is true, did certify that the plates had “the appearance of gold,” and that the engravings on them had “the appearance of ancient work, and of curious workmanship.”

But they weren’t specialists.

Moreover, the official witness statements, at least, provide no specific information as to the dimensions or the weight of the plates.  They don’t describe the engravings in any detail.

However, such details are in fact available among the numerous unofficial statements that we have from the various people who saw them.  (See, for example, the very helpful compilation by Kirk B. Henrichsen, “How Witnesses Described the “Gold Plates,” in “Journal of Book of Mormon Studies” 10/1 [2001]: 16–21, 78; https://scholarsarchive.byu.edu/cgi/viewcontent.cgi?article=1267&context=jbms.)  So, in my judgment, that objection fails.

But let’s get back to the Eight Witnesses and their declaration that they had seen, hefted, and handled the plates:

“Be it known unto all nations, kindreds, tongues, and people, unto whom this work shall come: That Joseph Smith, Jun., the translator of this work, has shown unto us the plates of which hath been spoken, which have the appearance of gold; and as many of the leaves as the said Smith has translated we did handle with our hands; and we also saw the engravings thereon, all of which has the appearance of ancient work, and of curious workmanship. And this we bear record with words of soberness, that the said Smith has shown unto us, for we have seen and hefted, and know of a surety that the said Smith has got the plates of which we have spoken. And we give our names unto the world, to witness unto the world that which we have seen. And we lie not, God bearing witness of it.”

Such a statement cannot simply be brushed off.   Even though the Eight Witnesses lacked postgraduate training in numismatics, prehistoric archaeology, and metallurgy, their testimony is still very important.

“With these simple claims,” as Richard Lloyd Anderson remarked in his classic 1989 book “Investigating the Book of Mormon Witnesses,” “eight farmers and artisans publicly reported that Joseph Smith had shown them ancient plates of the Book of Mormon.  A practical group who worked with their hands, they were better able to evaluate the “appearance of gold” and the “curious workmanship” than eight picked at random from a modern city.”

Perhaps more significantly, though, the testimonies of the witnesses were almost certainly never intended to certify the antiquity of the plates, let alone to provide a chemical or metallurgical analysis of their physical contents.  The more basic question—and certainly the most pressing question—was whether, in claiming that he had literal plates from which he was dictating the Book of Mormon, Joseph Smith had anything at all.  Was he, as most critics have claimed over the past nearly two centuries, simply lying?  Or, alternatively, might he have been hallucinating?

The purpose of the witness testimonies, and their clear effect if they’re not rejected, is to confirm that Joseph Smith in fact possessed real, solid, tangible plates (and, in the case of the Three Witnesses and at least one of the unofficial witnesses, other curious but thoroughly physical objects besides).  Now, this doesn’t by itself prove the Book of Mormon true or demonstrate that Joseph was a prophet.  But that limitation scarcely renders them without value.  They are an important part of a cumulative case for the inspiration and the historicity of the Book of Mormon.

For one thing, they take the plates out of the realm of the subjective.  If others besides Joseph Smith saw, handled, and hefted them, they didn’t exist solely in his imagination.  He wasn’t lying when he claimed to have them.

This greatly complicates the task of those who would reject the Restoration.  They can’t just write Joseph off as a well-meaning fantasist who simply dreamed about his experiences.  They can’t dismiss him as merely mentally ill and hallucinating.  The facticity of the plates (a great word, that—“facticity”) forces a stark either/or choice:  Either Joseph (perhaps aided by one or more of the witnesses themselves) was a deliberate and conscious liar who somehow created or obtained a set of bogus metal plates, or he was telling the truth about them.

And then there are the Three Witnesses.  Not only did they too claim to have seen the plates, but they solemnly declared that those plates had been shown to them by an angel of the Lord and that the voice of God himself had informed them that the translation dictated by Joseph Smith was done “by the gift and power of God.”

Another reason that is sometimes advanced for dismissing the testimony of the witnesses in advance, without seriously engaging them, is the claim that we lack the original witness statements and their signatures, and that, anyway, Joseph Smith wrote those statements out and simply appended the witnesses’ signatures to them.  But the historical record offers a rich profusion of statements from all of the Three Witnesses and some of the Eight, so we’re not dependent solely on the official printed testimonies for knowing what they said.  Moreover, the earliest copy of the witness statements that we possess, in the Printer’s Manuscript, is actually in the handwriting of one of the witnesses—Oliver Cowdery.

Finally (for this column, anyway), some critics declare that the witness statements would never be permitted to count as a valid legal affidavit in a formal court setting.  That can be debated, of course.  But I respond this way:  A few weeks ago, I was involved for several hours in an interview with a retired federal prosecutor or United States attorney and a retired federal judge.  In the course of that conversation—some of which, at least, will eventually appear in a documentary that the Interpreter Foundation is preparing as a sequel to follow its “Witnesses” theatrical film—they observed that the testimony of the Eight Witnesses is couched very much in the form of a legal affidavit, with its direct affirmations, its appended names, and its solemn closing oath (“we lie not, God bearing witness of it”), which is reminiscent of a courtroom.

The indispensable starting point for any serious study of the Book of Mormon witnesses remains Richard Lloyd Anderson’s “Investigating the Book of Mormon Witnesses”, which was first published in 1989 but remains in print.  The recently-launched and still-growing website “Witnesses of the Book of Mormon” may already be the premiere location online for keeping up with solid, faithful research and writing on the subject, as well as for inspecting primary source documents from and about the witnesses.  For some recent thoughts on the topic, please see my essay “Variety and Complexity in the Witnesses to the Book of Mormon”.