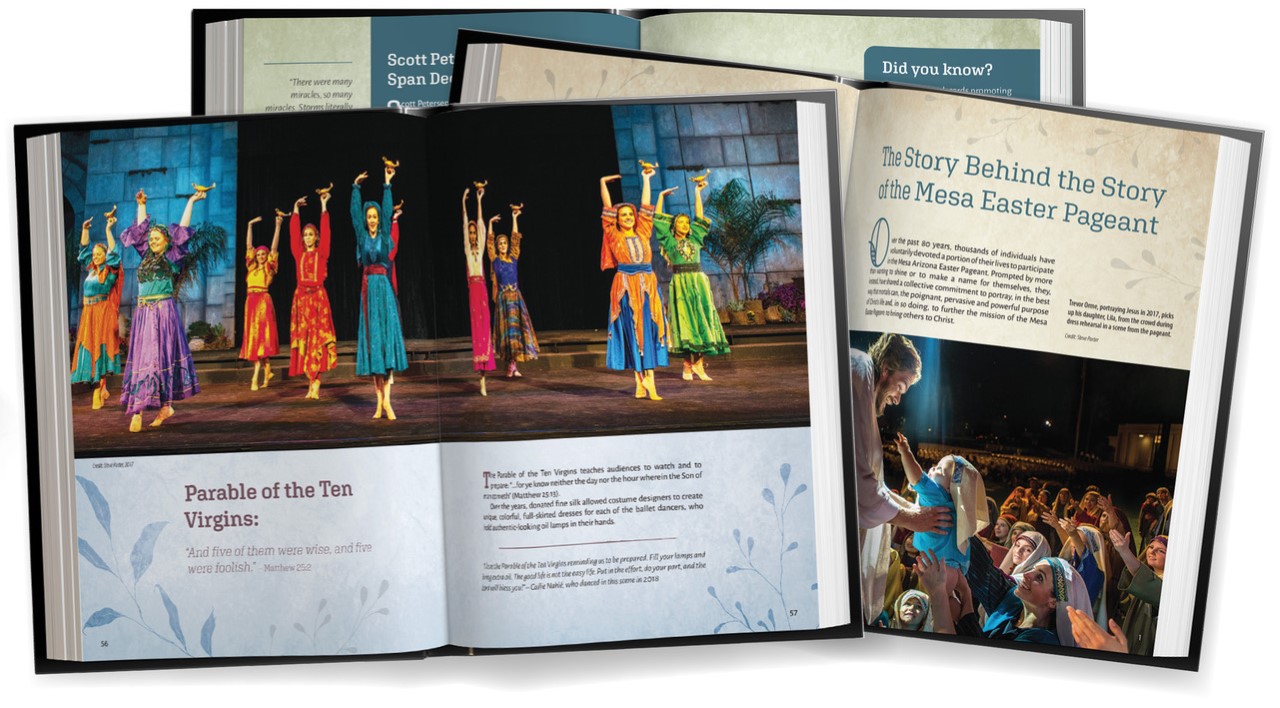 After a three-year hiatus, this week marks the return of an 80-year-old Eastertime tradition, that of portraying the greatest, most hopeful and faith-inspiring story ever told, of Jesus the Christ, the Savior of the World, His life, mission and miracles—told in music, dance and pageantry on the grounds of the Mesa Arizona Temple.

Although it was announced in 2018 that the Mesa Easter Pageant would be one of only three pageants the Church would continue to support, it had already been placed on hold for the major renovation of the Mesa Temple. Now, the pageant returns with renovations of its own, opening a new chapter, on a new stage, with an all-new script and music.

This break also turned out to be the perfect time to chronicle the foundations of the pageant. A recently released book, “The Mesa Easter Pageant: 80 Years of Sharing the Story of Jesus the Christ,” co-authored by Jill Bishop Adair, of Mesa, and Cecily Markland Condie, of Litchfield Park, Ariz., not only documents the pageant’s history, but also provides a look its staying power and the impact of this ongoing tradition of sharing talent and testimony.

The book quotes Jenee Wright Prince, pageant creative director since 2012, as saying, “The reason it has stood the test of time is because of its truthfulness, what it brings to the community, and what Christ means to each of us individually.”

The import of this message is clear and forms the backdrop of everything about the pageant.

“The story behind this sharing of the story of Jesus the Christ is a fascinating tapestry, with innumerable examples of sacrifice and of consecration of time and talents,” says Condie. “It’s a blend of life-changing experiences, miracles large and small, countless acts of service and of the Spirit touching the hearts and lives of literally thousands of cast, crew and audience members alike.”

The motivation behind writing the book for the long-time colleagues and friends, was, in part, their own history with the pageant. Both had been cast members more than once, Adair when she was in high school and not yet a member of the Church; and then later with her husband, Scott, and their three children. Condie had been in the cast two years as a single mom of grown children. “We both had experienced for ourselves the life-changing power and peace of participating the pageant and of testifying of the Savior in this way,” Condie says.

Adair and Condie had both served as publicity director at different times for the pageant and, as journalists, had covered the event for various publications for more than 30 years.

They set out to not only capture the history, but to clear up discrepancies in some of the details.

“There were definitely some of what you would call ‘urban legends’ about when, exactly, the event started and whether it ran every year. We had been told—and then we had repeated—some misconceptions. We wanted to set the record straight and to preserve as accurate a record as possible,” Condie notes.

The process required extensive research—combing through microfilm of the Mesa Tribune and other sources that have not yet been digitized, searching online archives, going through boxes of several personal collections of memorabilia and programs.

Now, the book opens with a brief, meticulously documented, “Story Behind the Story.” This section explains that after the Arizona Temple was dedicated in 1927, while many community Easter services were held in the area, some even on the grounds of the temple, it was the sunrise service in 1938 that marked the beginning of a continuous string of annual Easter celebrations on those sacred grounds.

“Some thought it wasn’t put on during WWII, but we were able to find record showing it was done every year from 1938 through 2018, except for one year –1975, which was when an open house and dedication was held at the temple after it had been renovated the first time,” Adair says.

Condie adds, “When you start seeing the progression from a simple choral service at sunrise to what is now recognized as largest annual outdoor Easter pageant in the world, you begin to see that the pageant has grown as the need for a greater emphasis on the Savior has grown. And there were often people who seemed to show up just when their particular talent or specialty was needed.”

“We knew the history was important but we wanted to find and share inspiring stories and photo, too,” Adair says.  Stories were collected on a Facebook page, via email and in recorded interviews with more than 50 principal contributors, including past directors, pageant presidents, men who portrayed Jesus, costume designers, backstage crew members, etc.

The oldest interviewee was Grant Gunnell, who lives in Mesa and sang in the sunrise service as a senior at Mesa High in 1944. “It meant a lot to us to be there and sing. It was a testimo­ny-builder. I was about to graduate and go into the service,” he told the authors. ‘I think being in the chorus really strengthened my conviction of the gospel.”

The second chapter, “The Story as Told on Stage,” shares faith-promoting experiences from those who have participated in the cast.  Personal experiences are also shared throughout the section titled, “The Story Through the Years,” where the book highlights the changes made each year.

“This simple story that we shared on page 30 stands out to me,” Adair says. “I remember talking to a young woman who helped with makeup backstage. She had felt the blessings of being involved in the telling of the Savior’s story.

She said, ‘Even though it was just an actor, I knew Christ was real and He died for each and every one of us.” She added that the pageant had changed her life. ‘Anyone could do this; it’s not hard. The pageant really doesn’t need me, but I need the pageant.’”

Condie adds, “We not only wanted to pass along these inspiring stories and experiences, as well as to add our own testimonies to the many others’ who, over the years, have contributed their time, talents and resources, to sharing the message of Christ through the Easter pageant.”

“It’s a beautiful tradition,” Adair says. “It was over privilege to documents its remarkable history.”

Condie feels the book “will mean a lot to those who want to reminisce about their own pageant experience, but also to anyone who wants to know more about Mesa’s history or about the sharing of the story of Jesus the Christ in this way.”

“The Mesa Easter Pageant: 80 Years of Sharing the Story of Jesus the Christ,” published by Condie’s Inglestone Publishing, is available at the Deseret Bookstores in Arizona and online at Amazon.com or at www.mesaeasterpageantbook.com.