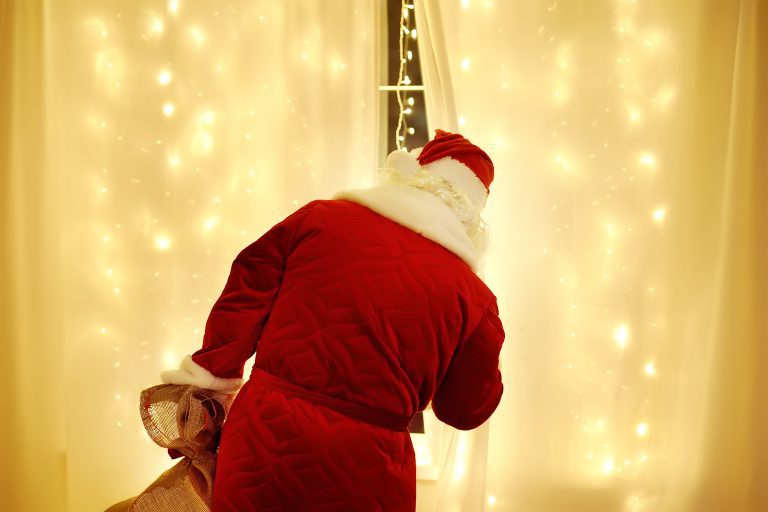 I’ve read that people playing Santa are in short supply this year. I know that the people who usually ask me have not requested any visits. I’ve seen Santas out and about, but they have been few. I wonder if Covid has affected both those wanting to have Santa come, and those wishing to play the part.

We were planning to visit my daughter this week, so she asked if I could play Santa for her kids. “They missed out on it last year with Covid,” she said, “and the people in charge of our community celebration didn’t schedule anyone to come play Santa there like they usually do.”

I was free of Covid, so I told her I would be happy to do that for my grandchildren. She called again a few hours later and said she had mentioned it to some of her friends. She said they asked if they could join us. I told her that would be fine. Then, a few hours later, she called once more.

“I was visiting with one of the ladies in charge of our community party, and she said the only reason we weren’t having Santa there was because we couldn’t find anyone to do it.”

My daughter asked me if I would do it for the entire community. I told her I’d be happy to.

At the party, we found most people there still assumed Santa wasn’t coming, but a few parents had found out.

“With Covid and everything, I’m not sure anyone even thinks about Santa anymore,” one mother said. “I know my teenage son only does to go on and on about how silly it is to believe in Santa.”

Comments like that made me wonder how it would turn out. After everyone finished eating, they started singing Christmas songs. I slipped out to don my Christmas clothes and change into my alter ego persona. It wasn’t long before my wife signaled it was time for me to enter.

As I ho-hoed my way into the hall, jingling the bells, the entire crowd burst into joyous and loud applause. Immediately, the children came to greet me, with a few teenagers in the lead.

“So, what’s my name?” a young teenage boy asked with a sly smile.

“Are you serious?” I replied. “You don’t even know your name? I bet if you asked your mom, she could help you with that.”

The other teenagers laughed, and one said, “I think he’s beyond help.”

They ushered me to a chair they had prepared. I had requested someone to indirectly let me know the children’s names. The lady chosen was good. As the same boy came to visit with me, the lady said, “Okay, Josh, we’re ready. Go ahead.”

He let out a sigh. Now he couldn’t try the same trick. So, he changed his approach. Grinning, he asked, “Where are your reindeer? I don’t see them outside anywhere.”

“This time of year, they are resting, taking vitamins, and getting strong for the big day coming up,” I replied. “I can’t be wearing them out on a trip like this when they have such an important night next week.”

The boy gasped in exasperation, and the other teenagers laughed. But he wasn’t through with me yet.

“Have you heard of United Airlines?” I replied.

“There are no airlines at the North Pole,” he said.

“No,” I said. “That’s why I have to take a little commuter snow-plane down to Anchorage.”

By now the smaller children were clamoring for a turn. That and the good-natured ribbing of his friends seemed to halt his plan, so he took his candy cane and went on his way. But he and his friends were back later for rounds two, three, and more. But luckily, each time, I had an answer to their questions.

Later, an older person pulled me aside. “That was quick thinking with those teenagers,” he said. “Maybe that’s why so few people play Santa.”

I actually thought the challenge with the teenagers was fun. But what always brought me back to play Santa again and again were the requests from the children that touched my heart.

This was absolutely delightful.