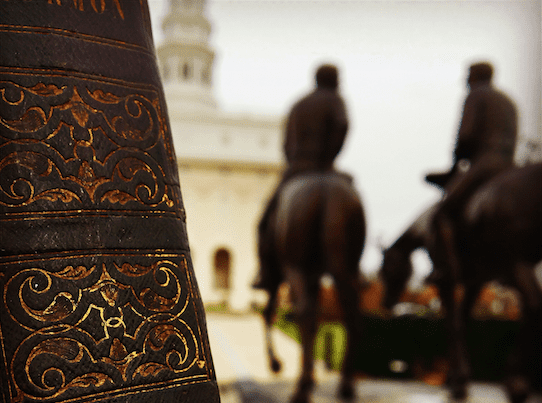 “Behold Thou Art Hyrum My Son”: The Story of “The Lost Manuscript” of Section 11

Over the past two decades I’ve seen some pretty spectacular books, documents and artifacts pertaining to early Mormon history. I’ve had the privilege of holding in my hands copies of the Book of Mormon that belonged to the prophet Joseph Smith and his brothers Hyrum and Samuel.  I’ve looked through Wilford Woodruff’s reading glasses–and read each of the 805 verses that he marked in his 1876 copy of the Doctrine and Covenants.  I’ve held Jacob Whitmer’s seer stone in my hand.  And, I’ve held and read the earliest known handwritten copy of what is now Section 11 of the Doctrine and Covenants.  I think that most readers would be surprised to learn that the previously-mentioned treasures are currently owned by private individuals and are not part of the collections held by the LDS Church or one of the Utah universities.

In the title I mention “the lost manuscript” of Section 11 of the Doctrine and Covenants.  When the first volume of Revelations and Translations (The Joseph Smith Papers) was published in 2009, it featured the earliest known images of most of Joseph Smith’s early revelations. However, the handwritten copy of that revelation received by Joseph Smith for his brother Hyrum, which is now known as Section 11 of the Doctrine and Covenants, was not among the images in that book. If the location of this handwritten revelation was not generally known in 2009, for all intents and purposes, it was “lost”.  Where had it been for the previous 180 years?  Although I don’t know all of the answers, in this article I hope to shed a little further light on this history and location of the original manuscript.

This revelation was first published in 1833 in the Book of Commandments as Chapter X. Two years later it was published in the first edition Doctrine and Covenants [1835] as Section XXXVII.  And, since 1876 when Orson Pratt rearranged the revelations in mostly chronological order and added twenty-six new sections, this revelation has been known as Section 11.  However, we need to go back to 1829 for its origin.

In May 1829, Joseph Smith and Oliver Cowdery were engaged in translating the Book of Mormon.  At the time they were in Harmony, Pennsylvania. On May 15th they received a visit from the resurrected John the Baptist.  He bestowed upon them the Aaronic Priesthood.  Joseph Smith and Oliver Cowdery then took turns baptizing each other in the Susquehanna River.  Following the baptisms the Prophet Joseph reported:

“Our minds being now enlightened, we began to have the Scriptures laid open to our understandings, and the true meaning and intention of their more mysterious passages revealed unto us in a manner which we never could attain to previously, nor ever before had thought of. In the meantime we were forced to keep secret the circumstances of having received the Priesthood and our having been baptized, owing to a spirit of persecution which had already manifested itself in the neighborhood. …

“After a few days, however, feeling it to be our duty, we commenced to reason out of the Scriptures with our acquaintances and friends, as we happened to meet with them. About this time my brother Samuel H. Smith came to visit us. …

“Not many days afterwards, my brother Hyrum Smith came to us to inquire concerning these things, when at his earnest request, I inquired of the Lord through the Urim and Thummim, and received for him the following: [Section 11 of the Doctrine and Covenants]

I first learned that this rare manuscript was in private hands five years ago while perusing a rare book catalogue that listed over $10 million dollars worth of Mormon books, documents and artifacts.  As I looked through the catalogue, some of the highlights were a first edition Book of Commandments [1833], Hyrum Smith’s first edition Book of Mormon [1830] and Wilford Woodruff’s copy of the Book of Mormon.  However,  I was most surprised to see a listing for the following item:  “Section 11 of the Doctrine and Covenants – in Hyrum Smith’s Handwriting”.  Like most students of church history I had assumed that this original handwritten revelation was in possession of the LDS Church.

After seeing these spectacular early Mormon artifacts, a few years passed by.  During that time I wondered where the manuscript revelation had ended up.  Then, two years ago while visiting a new acquaintance and fellow collector, I learned the answer–it was now in his collection!    Following that visit I contacted a friend and scholar at the Church History Library (CHL) who worked on The Joseph Smith Papers.  I asked him, “What is the oldest copy of Section 11 that you have?”   He responded, “The Book of Commandments” — which was printed in 1833. I then asked another question, “So you don’t have any manuscripts predating the Book of Commandments?“.  The answer was , “No, not even a printer’s manuscript”. I told my friend at the CHL about the manuscript revelation owned by my friend.  He expressed an anxious desire to one day see the manuscript.

Another year passed by.  Then, earlier this year , I made another trip to visit my friend with the Hyrum Smith document.  He had expressed an interest in possibly selling the manuscript revelation.  I asked him if he would allow me to represent him in the sale and also take the manuscript to the Church History Library and allow them to make a proper scan and research the document.  After signing the appropriate legal forms,  my friend allowed me to take the manuscript with me. As I flew back to Salt Lake City with that precious document, I got my fair share of stares on the plane.  After the plane took off, I removed the document from its protective outer case.  I lowered my tray table and gently set the legal-sized document on the tray.   I then spent the next 20 minutes carefully reading the entire text.  The words were written in ink on both sides of the bluish paper. This is what I read (original spelling and punctuation maintained):

Like most flights to Salt Lake City, there are  usually several members of the Church scattered throughout the plane.  My flight was no different. The guy next to me happened to be LDS.  He tried to nonchalantly look over and see what I was reading.  Finally his curiosity got the better of him and he asked, “What are you reading?”  I responded, “The original manuscript of Section 11 of the Doctrine and Covenants–which is in the hand of Hyrum Smith“.  He rolled his eyes and said, “Yeah, right!  No really, what are you reading?”  I repeated my earlier answer.  I then asked him, “Have you ever seen a first edition Book of Mormon?“  Before he could answer I pulled a copy out from my backpack.  He then asked, “Don’t you need a bodyguard?”  I’ve traveled over a million miles on planes.  I almost always have something old and interesting with me–which often leads to entertaining conversations like this one.

The following Monday I delivered the document to the CHL for review by the experts who work on The Joseph Smith Papers.  They spent the next several weeks reviewing the document, comparing the handwriting of Hyrum Smith to known documents and testing the document for any signs of forgery.  After several months of review and collaboration, this document was finally added to the online version of The Joseph Smith Papers.  Now, for the first time in over 180 years, this handwritten revelation is available for all to see:

So here is what I’ve learned about the provenance–or ownership history– of this “lost document”.  This manuscript, which was written by Hyrum Smith, apparently remained with Hyrum Smith and his descendants for about 130 years.  For me, it makes sense that Hyrum would hold on to this revelation– it was at his “earnest request” that this revelation was received.   Then, several generations later in 1960, it was acquired from the descendants of Hyrum Smith by Walter H. Smith (Mesa, AZ).  A little over three decades later, in 1982, the great, great grandson of Hyrum Smith (Hyrum W. Smith), acquired the manuscript from Walter Smith.  And, a few years ago it was subsequently acquired by my fellow collector and friend.   I’ve been keeping track of this document for the past five years.  It is now owned by Quinton Riches.  And yes, it is still available for purchase.   When asked what my goal is for this manuscript revelation is–I respond  “Hopefully, I will sell it to someone who will then donate it to the LDS Church–so that it can be permanent part of The Joseph Smith Papers“.

Reid N. Moon is the owner of Moon’s Rare Books in Provo, Utah.  He and his wife Melanie and their four children are members of the Edgemont 14th Ward in Provo, Utah.

Brother Moon presents a free monthly lecture–an “FHE Fireside” at his shop in Provo.  The next lecture will be Monday, November 7th at Heirloom Art & Co. (formerly Zion’s Mercantile) at the Shops at the Riverwoods, 4801 N. University Ave. Provo, UT 84604.  Please call 801-802-6064 to RSVP.

FYI: This document was listed five years ago in the "Taylor & Woodruff" Rare Mormon Books and Documents Catalogue for $950,000. The owner, however, is willing to sell this Hyrum Smith document for substantially less. Please contact the author, Reid Moon, at Moon's Rare Books in Provo for any pricing inquiries.

How much is it for sale for please?