Behind the Scenes of the Wilford Woodruff Papers Project | Meridian Magazine 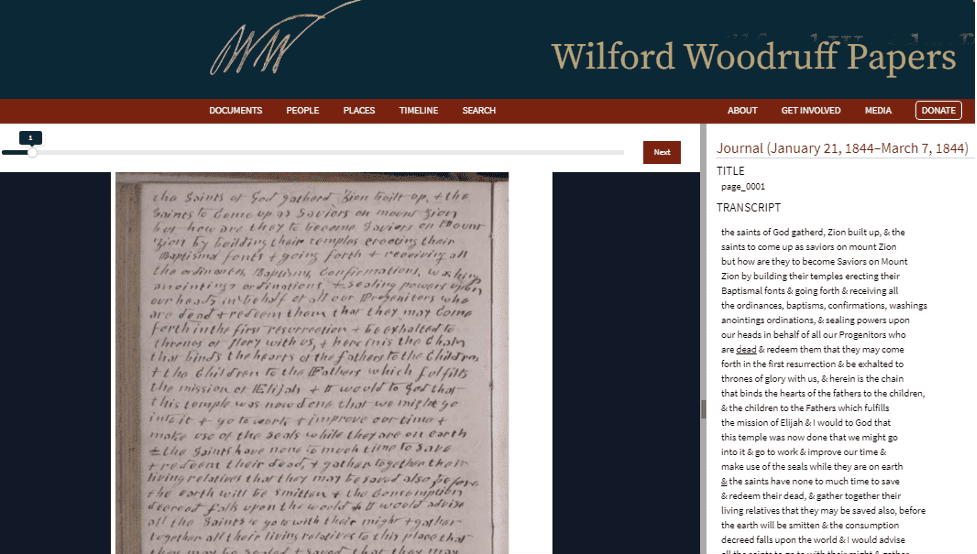 Behind the Scenes of the Wilford Woodruff Papers Project

In October 1985, bombs went off in the Salt Lake Valley, killing two innocent people and nearly a third victim, who, it turned out, was the bomber, Mark Hofmann. Detectives discovered that the murders he committed were connected to documents he forged and sold.

Mark Hofmann had told people he could acquire documents created by an early Latter-day Saint apostle named William McLellin. In June 1985, as part of his master plan, Hofmann offered to donate those documents to The Church of Jesus Christ of Latter-day Saints. Plot twist: neither he nor The Church knew then that McLellin’s papers were sitting on a shelf in The Church’s archives, out of sight and out of mind. Archivists rediscovered them in March 1986 during the legal investigation following the bombings.

What? We’re three paragraphs in and not one word so far about Wilford Woodruff and his historically significant documents?

We’re getting there. Give me credit for starting with document editing. And, let’s be honest, if the first sentence of this article included any of the words holograph, paleography, transcription, or verification, would you have kept reading?

Trust me, there are links between the forgeries, the bombings, how I became a document editor, why I am working on the Wilford Woodruff Papers Project, and how it is making Wilford’s documents available to you and the people you love. Here they are:

Rumors spread that The Church would suppress McLellin’s documents. Instead, Church leaders invited Jan Shipps, a renowned Methodist scholar and historian of the Latter Day Saint movement, to edit McLellin’s papers for publication by an academic press. In 1991 Professor Shipps began her collaboration with John W. Welch, editor-in-chief of BYU Studies, where I was an editorial assistant. I was assigned to compare the manuscript (handwritten) journals to transcripts (typed copies) to ensure accuracy.

Reading those journals very closely baptized me into document editing. McLellin’s journals are strong evidence for Richard Bushman’s informed observation: “The closer you get to Joseph Smith in the sources, the stronger he will appear, rather than the reverse, as is so often assumed by critics[1] .” I was born again.

Document editors think knowledge of the past is a sacred trust, preserved in documents. Their job is to get that knowledge into the minds of users. To do that they have to mediate between the writer and the user, and they worry about mediating too much.

Document editors are also like translators. They translate the past into the present, and the good ones are minimally invasive. They give readers everything they need to understand the documents and nothing they don’t. So document editors don’t fix mistakes. They preserve them.

Enter Wilford Woodruff, or at least his documents. He wrote almost 7,000 pages of journal entries between 1834-1898. He wrote thousands of letters and received thousands more. He gave hundreds of discourses, and he wrote several autobiographies, too. He preserved and conveyed a massive amount of sacred knowledge. So, where is it? Could you put your hands on it right now? Could you read it if you wanted to? Could your children and grandchildren interpret and internalize it?

Where are Wilford Woodruff’s documents now?

Let’s get at the questions by reviewing where this sacred knowledge was. Years ago, Carolyn Woodruff Owen’s mother asked her to look through an old box to learn what was in it. She found several small notebooks in which Wilford Woodruff inscribed his journal. She also found other manuscripts. Carolyn’s family donated all of these documents to The Church of Jesus Christ of Latter-day Saints. They are now in the Church History Library, and digitized images of them are freely available through the Church History Catalog.

Well, many of them look like that. But Wilford also wrote in cursive sometimes and in block capital letters sometimes. He began sentences with upper-case letters, and lower-case letters, and middle-case letters that were distinctive to him. He used the same variety of letters in all of his documents. Wilford was a good speller; so good that he spelled his name and other words in various ways. In Willford’s world, some smart people said you lacked imagination if you could only think of one way to spell a word. Wilford punctuated creatively too. All of that adds degrees of difficulty to deciphering Wilford’s writing, a process called paleography.

You can handle paleography if you’ve come this far

Once the documents are in hand, we document editors use our paleography skills to transcribe each one, making a typed version (or transcript) that preserves the author’s intentions while giving readers access. Document editors do their work according to pre-determined rules we call our editorial method. For example, the Wilford Woodruff Papers editorial method says:

“The approach to transcription employed in the Wilford Woodruff Papers is a conservative style of what is known as ‘expanded transcription.’ The transcripts render most words letter by letter as accurately as possible, preserving the exact spelling of the originals. This includes incomplete words, variant spellings of personal names, repeated words, and idiosyncratic grammatical constructions.” You can read the entire editorial method on our About page at  wilfordwoodruffpapers.org.

The transcriber verifies the accuracy of their transcript. Even the best transcribers make mistakes. So the next step is a second level verification in which two people read the document together. One reads the handwritten version aloud, pronouncing every word, and every letter of any “misspelled” word, noting every capital, every number, and anything else out of the ordinary. The other reader rivets their attention on the transcript and listens for anything that is inconsistent with what they see. Experienced verifiers can read five or six pages of Wilford’s journals in an hour. Once a document has been verified twice (and editorial assistants add subject links to it so users can learn about the people and places it mentions), it is uploaded to wilfordwoodruffpapers.org.

The Wilford Woodruff Papers Project began in 2020 with a huge head start. The Joseph Smith Papers had already done immense amounts of pioneering work. Several members of the Wilford Woodruff Papers team have experience on The Joseph Smith Papers and an ongoing alliance with it. Everyone who works on both projects shares the same vested interest in making sacred knowledge widely available and accessible to people everywhere.

Our Executive Director is Jennifer Mackley. She co-founded The Wilford Woodruff Papers Foundation in 2020. By then she had already been transcribing Wilford’s letters and journals and gathering, cataloging, and analyzing thousands of his documents. The process control file she built over the course of her 24 years of research contains over one million data points. It would make other document editing projects jealous.

Sherilyn Farnes is the Managing Editor of the Wilford Woodruff Papers. She brings years of expertise and ability to the job and leads our team of Editorial Assistants. Lorin Groesbeck is the most experienced among them, having worked on The Joseph Smith Papers. She often trains the others and is trusted with the most responsible parts of the process, including being the last one to look over the documents before they go live on wilfordwoodruffpapers.org.

Sometimes The Joseph Smith Papers and The Wilford Woodruff Papers feature the same documents, because Wilford Woodruff recorded more detail than others who were witnesses to Church history and, in some cases, his writings are the only surviving record of events or discourses. The entry in Wilford’s journal above is one example. It is the source for a discourse Joseph gave early in 1844, just a few months before he was murdered. He spoke about the vital need for temple ordinances. Joseph taught, as Wilford recorded:

“The question is freequently asked can we not be saved without going through with all thes ordinances &c I would answer No not the fulness of salvation, Jesus said their was many mansions in his fathers house & he would go & prepare a place for them. House here named should have been translated -[kingdom]- & any person who is exhalted to the highest mansion has to abide a celestial law & the whole law to, But their has been a great difficulty in getting anything into the heads of this generation it has been like splitting hemlock knots with a corn do[d]ger for a wedge & a pumpkin for a beetle; Even the Saints are slow to understand I have tried for a number of years to get the minds of the Saints prepared to recieve the things of God, but we freequently see some of them after suffering all they have for the work of God will fly to peaces like glass as soon as any thing comes that is contrary to their traditions, they cannot stand the fire all at all, How many will be able to abide a Celestial law & go through & recieve their exhaltation I am unable to say but many are called & few are chosen.”[1] ?

That sacred knowledge would be lost if not for Wilford Woodruff and his document editors. You, or people you love, may never read another Wilford Woodruff journal entry or visit wilfordwoodruffpapers.org. But you and they may be internalizing the sacred knowledge anyway. More than 600,000 copies of Saints: The Story of The Church of Jesus Christ in the Latter Days are in print and millions of people are reading or listening to Saints online. It is based largely on Wilford Woodruff’s papers.

I recently re-read volume 1, The Standard of Truth. It tells the story of Wilford baptizing his sister, father, and others before hurrying from their Connecticut home to Scarborough, Maine in time for his wife Phebe to give birth to their daughter, Sarah Emma, in the summer of 1838. As I read I thought about the millions of people who have internalized the sacred knowledge found in Wilford Woodruff’s records of the Restoration. When you think about it that way, document editing no longer seems boring or irrelevant.

We invite you to visit wilfordwoodruffpapers.org and take a front row seat to history as we all participate in the ongoing Restoration of the Gospel of Jesus Christ through His chosen servants, the prophets.

If you know of any Wilford Woodruff documents that we might not be aware of, please let us know using this Documents link.

If you are able to volunteer your time and talents and be a part of this historic undertaking, visit ourvolunteer page to learn more about current opportunities.

To financially support our transcription and research teams, learn how you can make a donation or contact us [email protected].

Steve is a professor of Church history and doctrine at Brigham Young University. After graduating from BYU with a BA in history, he earned an MA in American history from Utah State University, and a PhD in early American history from Lehigh University. He began teaching at BYU Hawaii in 2000, then joined the faculty at BYU in 2002, and taught at the BYU Jerusalem Center in 2011–2012. He became a volume editor of The Joseph Smith Papers and the document editor for BYU Studies in 2002. In 2012 Steve was appointed as the managing historian and a general editor of Saints: The Story of the Church of Jesus Christ in the Latter Days, and was named editor in chief of BYU Studies Quarterly in 2018. He has authored numerous books and dozens of articles including: Promised Land (2006), Making Sense of the Doctrine and Covenants (2008), Joseph Smith’s First Vision (2012), and First Vision: Memory and Mormon Origins (2019).