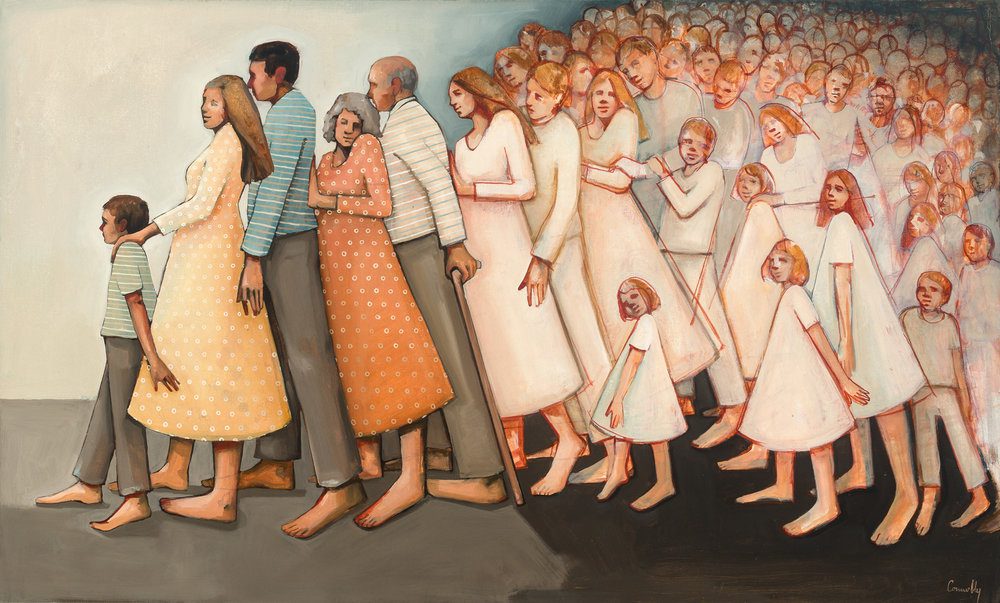 Cover image: “Us With Them and Them With Us,” by Caitlin Connolly.

Billions have lived on this earth.   Each one has a story that they will tell for eons about family they learned to love while living here.  Many want to take these relationships to a higher level, but feel imprisoned by the lack of ability. Who can help them?…

“We Need Your Help!”

One day, a dear friend, “Jan” (not real name), felt the room she was in beginning to fill up with spirits from the “other side.”  She knew intuitively that these spirits were family members.  At some point a male “grandfather,” stepped forward as a spokesman for her father’s family line.  He said in a very Commanding voice,

“We need your help!”

She told him She would help in any way she could, then asked if he wanted her to do some research and gather information.  He replied,

“No! The information has been found, but the work is not getting done!”

Jan asked, “Who has the information?” He said,

Jan followed the directive and called her cousin Grace and sure enough, found that she had hundreds of family name cards already printed (but not completed), and hundreds more family names reserved in her computer, – so no-one else could do their work. These spirits were stuck!

Thankfully, Grace accepted Jan’s offer to help complete those saving ordinances for their ancestors, and she voluntarily delivered the stacks of cards to Jan’s home.  Jan then asked her family members who were scattered in many temple districts for help.

The following morning, Jan hastened to the temple and spent the entire day completing as many ordinances as possible.  As she exited the temple the same “great grandfather” stepped up to her.  He tenderly thanked her, and then emphatically and emotionally stated,

“THE PRISONERS SHALL GO FREE!”

He then faded from sight.[1]

Jan and Grace set in motion eternal work.  They became coworkers with angels…[2]

Elder F. Enzio Busche shared a similar story of a man named Joseph Gilbert, who was a recent convert to the church:

“On the day that he was in the temple for the first time, he saw in a vision of a great gathering of his ancestors who were looking at him and pleading with him, ‘Please, don’t forget us…We have all waited a long time for this!’” [3]

Spirits from the other side are occasionally allowed to come to express their desires to us. Sometimes it can be surprising…

Larry James wrote about an experience he had in the Mount Timpanogos Temple years ago,

“My wife and I were asked to help one of the families in our ward with sealings for their family. I was sitting in one of the witness chairs when the sound in the room became very still. I heard a female voice speak to my mind. She said,

It was the voice of my younger sister.  This had never happened to me and I began to weep.

“My sister had been dead for over four years. She was never active in the church, and had been married 5 times and had 6 children by different men. I had written her off as having made her decision as to the gospel of Christ. Needless to say, I interrupted the session and the sealer thought I was in some kind of trouble. I explained to him what had happened, but he didn’t seem surprised. Well, within one week, my wife and I had completed her sacred work.”[4]

Elder Jeffrey R. Holland joyfully taught, “Don’t underestimate your family on the other side of the veil.”[5]

Isn’t it the truth.  They often are allowed to break through to us in such interesting ways.

Maurine Proctor shared an experience where she personally learned how eager our kindred dead are to let us know they want their work done. She said,

“Scot and I spent the summer in England with our youngest two daughters, and part of that time we were doing family history. The night before we were going to spend the day in the Huntingdonshire archives where Scot’s ancestors were from, we were studying those family records, looking particularly for an end of line where we could break through.

The next morning, I said, “Scot, do you have a Sarah Holden in your line?” He said, yes, and we looked her up.

“That day in the archives we looked for Sarah, who had had her work done, but we discovered the work was incomplete for most of her siblings. Since then, we have continued to make breakthroughs on that line.”[6]

Ellen Lovett also heard a voice from beyond the veil.  She wrote,

“I joined the church with my husband in 1956 and was immediately immersed in doing genealogy research.  Since I have gotten older and have less responsibilities and more time, I spend most of my waking hours doing research.  I just feel compelled to gather all I can.  Recently, I woke up at 1:30 AM and the name “Mary Margaret Marsh” was spoken to my mind.  I had not heard the name before so tried to go back to sleep but couldn’t until I got up and wrote it down.  The next morning as soon as I was awake, I felt I had to find who she was.

“I worked all day on Family Search looking for any record I could find and found nothing.  Then I went to Ancestry, which I rarely use, and found a DAR record.   Never before have I found any of their records in my research.  Sure enough, there was her name and she was married to a man in my family line whom I had been researching his records less than a week before.  I had previously found no spouse for him, but there she was with birth, death and marriage records and more of his ancestry.

“I was so excited I could hardly sit still.  It was such a thrilling experience and I know it was only because of Divine help that I found her.  She must have been waiting to catch me in my sleep so I would sit still and listen. This is God’s work and it will have eternal joy for many of his children.”[7]

Sister Wendy Watson Nelson urged us to “Make time to help those on the other side make covenants with God! As you do so, the power of God will flow into your life in an unprecedented way.” [8]

Let me ask; who doesn’t need more power and aid in their lives?  As we embark on this endeavor to help our ancestors, they will help us.  They know who we are…

So, do our ancestors get together on the other side and talk about their “angels” on earth who are doing their work? Of course, it’s part of their history!  They will mention Jan, Grace, Joseph, Larry, Maurine and Ellen in hushed reverence as their partners with Christ in their exaltation.  And we, like the above-mentioned individuals, can be “angels” to our angels. The prisoners can be set free!

Feel free to CONTACT ME with your thoughts and stories. [email protected].

Anne, I remember your mother telling me of an experience she had in researching her family. Your mother had spent the day researching and felt like she had completed a family for sealing. When she went to bed that night, your mother could not sleep. The mother of the family she had researched was not content and happy. Your mother finally got up and reviewed her research work. She found an infant daughter that she had overlooked. Your mother added the baby girl to the family record for sealing to the family. When your mother finally retired in the wee hours, she felt the mother's joy and peace that her whole family would be together.

Your stories continue to inspire me. I have put into motion my mother's work, who passed away a year ago. (Baptism/Confirmation in Seattle Temple last weekend, our son baptizing one of our daughters, and tonight I did the initiatory work in Pocatello Temple. It will all be complete, shortly. What a joy to participate in this great work.