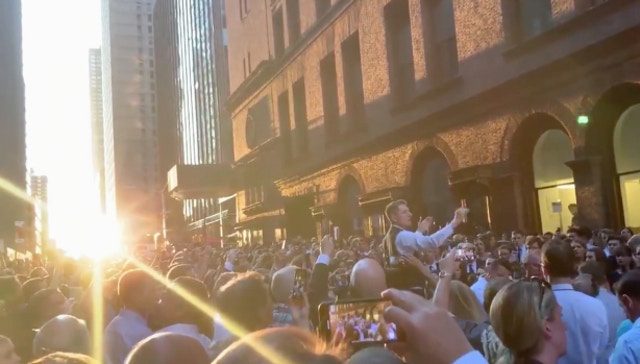 Thousands of people in Midtown Manhattan were plunged into darkness Saturday as an enormous blackout knocked out power to more than 30 blocks of the city from Times Square to the Upper West Side.

Within that area are many of the cities most famous Broadway theatres and concert halls including Carnegie Hall, which lost power mid-concert despite the performance being a once-in-a-lifetime opportunity for those involved.

Despite the potential heartbreak of this scenario, Latter-day Saint blogger Greg Trimble shared how the musicians that were prepared to perform had the chance to share something else entirely:

Sometimes personal dreams are crushed in an instant.

It’s a once in a lifetime opportunity for a musician to play in Carnegie Hall.

In an instant, a large portion of Manhattan lost power and the lights went out just prior to the men, women, and children who had been practicing and anticipating this day for the last year of their life.

Thousands of dollars were spent in airfare for large families, hotel accommodations and other travel arrangements. Instruments were transported, hundreds and thousands of hours were invested. And every heart was tuned for an experience INSIDE that historic hall.

Everyone was evacuated from the hall. A logistical nightmare that no one could have prepared for. We waited anxiously in the humid heat, prayed the power would come back on, and lit up the city with music that lifted the congregating masses.

As time went on and it started to get dark, Brandon Stewart stood up on a chair and announced that the hall would be cancelling the concert.

There was palpable pain that went through the air as he said those words. So many sacrifices seemingly dashed in an instant.

Certainly, people will call it a coincidence. But I learned that this is the first time in the history of this historic hall that they have ever had to cancel a concert because of a blackout.

When we got back to our hotel, a local worker told us without us asking that NYC hasn’t seen a blackout like this in 15 years.

The power was eventually restored near the time that the concert would have ended had it proceeded as planned.

My belief is that God moved a lot of really good people at their own expense to a place on this planet in which a message of hope and faith in Christ could be fully syndicated.

Millions have now heard this message. Here’s another look of that parting song… in its entirety.

I agree with Paul Wheeler.....it would have been nice to have had more information. What was the inside performance to have been??

No mention was made of why so many men had white shirts and ties. Was this a special "Mormon Night on Broadway" event? Was it near the temple and a meeting was taking place when the black out occurred? I cannot imagine why that many people in white shirts and ties just happened to be there in one group.