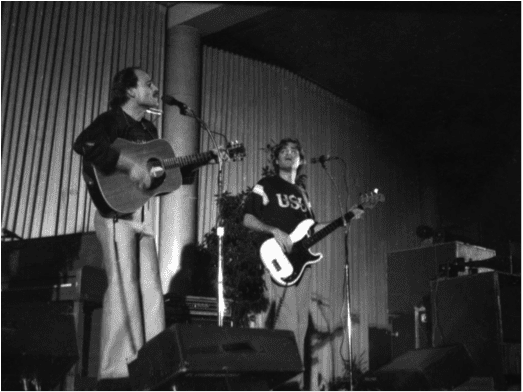 Backstage Graffiti: The Oom-pah of Repentance

I really like playing bass guitar. In the early days of recording and concerts, I had the good fortune of traveling with a bass player who was a complete wizard, Bill Cushenberry. There’s at least one aspiring bass player who bought my albums mainly to learn Bill’s lines.

In lots of songs (not mine), you hear the bass repeating a two-note “Oom-pah, Oom-pah,” consisting of the note the chord is based on alternating with the note that’s a fourth below it or a fifth above it (that’s the same note). Usually Oom-pah is adequate, and often satisfying. It’s what we’ve come to expect. Bill was not an “Oom-pah” bass player. His lines not only supported, they sang—and always surprised, in an inevitable sort of way. Bill’s hero was Jaco Pastorius, who pried all the frets off his bass to make it sing more smoothly. My impossible bass dream (as though Don Quixote played in a band—if you sing it, the rhythm is funnier than the image) has always been to play things that sound a little like Bill would make them sound.

The first bass I ever dared to own was one made by Travis Bean. It had been Bill’s, and I only bought it because it was kind of a work of art. (The neck was machined aluminum, and ran all the way through the koa-wood body to the bridge—how ‘bout that?)

As I shifted toward wanting a more traditional sound (tradition always wins with me), I sold the Bean and got a Fender Precision bass, which was the first bass guitar to be invented by Leo Fender in 1950.

By now, I was more serious about playing than about art collecting, so I began reading through the bass lines from a book of Bach chorales (way not Oom-pah). I was quite diligent. I practiced daily for probably eight or nine days. Then I needed money and sold the black Precision bass to a family band. Not too long after, I traded a nice guitar for an old Fender Jazz bass. There’s no picture of it here because it was unique and I don’t have pics of the actual bass.

It was built in 1964 (a prime classic year) and had dot position markers on the neck (which, for reasons I never discovered, made it way more desirable than any other kind, like trapezoids, stars, or letters spelling out “Gene Autry”). It was a killer bass. And badly refinished, which brought its value down to only a few thousand dollars—which, on the very day I learned about this, led to its immediate sale to a vintage instrument dealer in exchange for a handmade banjo, enough cash to pay a long-overdue phone bill, and enough above that to buy a modern re-issue of that exact bass.

This is the bass I got then and still have, which I love and which my kids will probably inherit. Up until the last few weeks, I’ve almost never had the need to take it out of my recording studio, because that’s the only place I’ve presumed to play it. For decades my most welcome recurring thought has been, as various projects pass through the studio, “Oh good! We can’t afford a real bass player for this one!”

When you play bass in the studio, most often you just plug straight into the board, bypassing an amplifier of any sort. So bass amps have never been on my radar. Until the last few weeks.

Cranking up this little rock band I’m building with my former stake president (screaming Stratocaster) and high priest group leader (massive electric drum set) and sister-friend that I home teach (lead singer, acoustic guitar, and keyboards—not a Sheryl Crow wannabe, but a Sheryl Crow couldabeen), I suddenly had to start thinking about getting a bass amp. At our first rehearsal I played through a nice little guitar amp that I have, but it just didn’t rumble like it ought to do, didn’t bump and growl and moan. So I crawled the Internet for countless hours researching different kinds, and drove up to the nearest Guitar Center to try some out. I finally settled on what Fender calls a “Rumble 200.” One of the selling points of this particular amp is that it can be made to sound like the classic Fender amps of yesteryear.

As I began to wonder how to pay for it, I began mentally inventorying pieces of equipment I own but don’t really need anymore—stuff I might sell. I thought “Well, if I’m gonna have the Rumble 200, I won’t need the Fender Bassman amp I’ve had for forty-four years. I actually thought this. It’s fifty years old, what they call a “blackface” fender (indicative of vintage classiness), original tubes, and, most mysterious and magical of all vintage virtues, “pre-CBS” (made before CBS bought the company in 1965 and started fiddling with the circuits). Then it occurred to me with some force, albeit belatedly, that I was sitting on a bass amp that a lot of players would give an arm and a leg for (leaving them one arm and one leg with which to play their instrument, which I, for one, would dearly love to see).

I told this story to Terry Brown (Stratocaster) on the way over from my house to Sandra’s (Sheryl Crow move-the-heck-over). I told it more concisely, because it’s only three blocks and also because Terry understood all the code. I even had time to tell him a second story.

All about the time that I, myself, wanted a Stratocaster. (Terry’s was unearthed for him by our treasure-hunting friend, Tom Bench, at a yard sale—it’s a dandy. Red.) I wasn’t playing in a band or anything during this period of unbridled lust, I just really wanted a Stratocaster. It’s iconic. It’s what Bob Dylan plays, and Eric Clapton, and Mark Knopfler, and… (Did you know that Mark Knopfler has a dinosaur named after him? All through the digging and dinosaur discovery process, the diggers and dinosaur discoverers were listening to Dire Straits.) So I crawled the Internet for countless hours researching different kinds, and drove up to the nearest Guitar Center to try some out. I began busting my head to think of a way to afford a Stratocaster. Then I remembered that I already had one, made in 1975 and languishing in my son’s closet in Rose Park. When I told these stories to Terry, he laughed a lot.

About one rehearsal later, we sat wondering, as we had for weeks, how we could get our hands on a keyboard for Sandra to play (she has five baby grand pianos in her basement because her daughter married one of the Five Browns and they practice there when they’re not on tour, but they aren’t portable—the pianos, I mean—the Browns are reasonably portable if you’re strong, and a couple of them are portable even if you’re weak). And suddenly Terry remembered that he already had one—a keyboard, I mean. Then I laughed. A lot.

I take these sudden rememberings as a sign of spiritual health, as evidence of effective repentance. When folks in the Book of Mormon were totally wicked (well, partially wicked, but way more wicked than they ought to have been) they would lose their tools, set their amps and Stratocasters and keyboards down someplace and forget where they were. Their tools became “slippery.” And stayed slippery, according to the scripture. But Terry and I are finding them again. Rejoice!