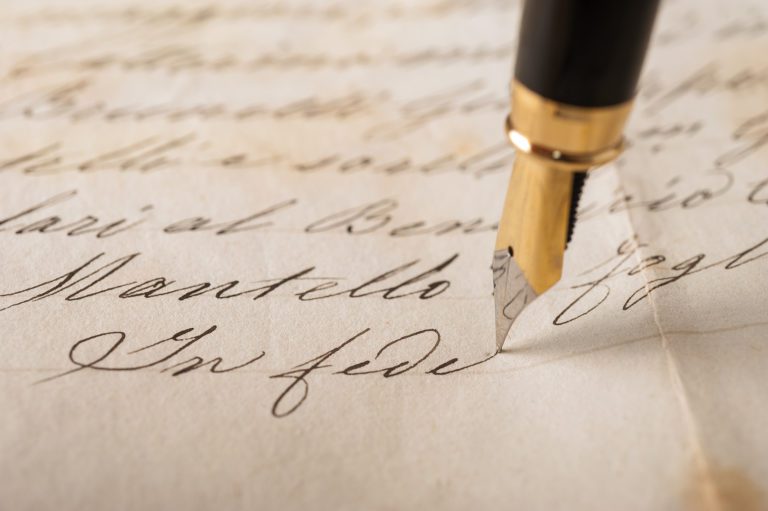 In the blog of a friend of mine, a little drama played out that would have saved me from writing this column if I’d remembered it earlier this morning. I’ll put it first, before most of what I wrote. It runs like this:

Chelsea Bagley Dyreng (my friend, who is a writer, as proven by the following photograph in which her hand is on her chin, the authentic way in which writers are photographed)

wrote in her blog “Vitamin C” (for “Chelsea”—get it?) this observation:

“The year after my twins learned cursive the school stopped teaching it. No more cursive. That means my younger children will never be able to read this” (emphasis added ((I always wanted to type “emphasis added” because it gives me a feeling of great power—the license to add emphasis must not be gainsaid)) ): And “this” (emphasis added) turns out to be a picture of a page from her college journal, containing a funny poem and the promise of something juicy on the next page. (Check the link.)

Going on: “My kids will also not be able to read this” (emphasis once again added): “This” (ditto) being a picture of a warm letter to the young Chelsea from her mother.

She concludes, “Cursive is going to be as readable as a foreign language. Of course, I can’t let this” (leaving this one alone) “happen to my children, so I will teach them the lost arts of Cursive and other outdated practices like Brainstorming and Coming Up With Original Ideas Not Found On Pinterest and Writing Thank-You Letters By Hand.”

These observations by Chelsea are the beginning (emphasis just already there) of the drama. The middle (where the conflict always appears and increases, is in a response from an actual lady handwriting scientist (she’s not a scientist of ladies’ handwriting, but is a lady herself) who methodically refuted the studies that suggest that writing cursive is good for your brain and spirit and popularity and political health and muscle tone and complexion. The scientist’s premise is that “cursive” and “printing” (with some letters sort of connected) are very distinct things (here give me a break), and that if getting things down quickly is the primary object of cursive, then cursive is found wanting.

Chelsea gracefully clarified that she hadn’t said that, and was still going to teach her kids cursive, whereupon the scientist responded (in what I seemed to discern as just the faintest suggestion of a huff) that she wondered why Chelsea hadn’t summarily abandoned her position upon reading the scientist’s words.

Instead, my friend wrote, “It isn’t about evidence. Or research. Or fine motor skills. It is about retaining a skill that will help my children connect with me and with their ancestors and with history, and it is very personal.”

And then came the end, which typically contains the resolution of conflict and the proof of a hero (even if the hero is, as in this case, merely an idea): It’s in the response of another reader of Chelsea’s blog who wrote that a friend “showed us the original ‘life story’ of my great-great grandfather… His cursive handwriting was beautiful, and I felt a new closeness to him as I read his handwriting and imagined his hands, the pen, the care that he took in putting pen to paper.”

Note that this gentle soul was not moved by How Fast Grandpa Got It Down.

James Arrington wrote a one-man show about J. Golden Kimball. I had the joy of playing “J. Golden” a number of times a few years ago, from American Fork to Jamaica. James was my director. During his extensive research, he was constantly entertained by what entertains everybody about J. Golden, his cussing and colorful point of view. But James was moved in his heart by two specific things, a rare sound recording of Elder Kimball’s final conference address, and J. Golden’s penmanship—he’d been groomed as a young man to become secretary to an apostle. So the hand that cracked the whip over oxen “who could only understand strong language” also laid down an elegant line in ink on paper.

Something I like about cursive is the toys. When I was in sixth grade, I found a fountain pen in an old desk. The pen was probably made in the thirties or forties. Nobody wanted it, so I got some ink and used it as my go-to writing instrument in school, which was the only environment in which I saw any reason to write, though I doodled at home. It was a fun toy, but required a degree of care, so I left it behind in high school. By then, I was printing everything—I mean printing by hand. (In those days, in order to get something printed mechanically you had to engage formidably equipped professionals.) By the time I got to college, my printing was pretty bad. By age thirty, it was entirely illegible.

I thought, “I’m coming of age soon.” (The Hobbit had recently been published in America.) “I should learn to write.” I began with all capital letters, like the Romans when they wrote on buildings. Then I dared cursive. All I had to go on was my memory of the green strip of white cursive letters along the top of the blackboard in Mrs. Langan’s third grade classroom. I wrote r-e-a-l slow. About that time I was cast in a play opposite Rosanna Ungerman, who became a life-long friend (well, actually, not yet), and together we discovered Osmiroid pens, which introduced me to the idea of italic writing.

I learned upon this very day, while researching this column, that italic may be something different than what I think it is. What I think it is, is the kind of writing that emerges from a nib that’s flattened slightly at the very tip, so that dragging it a certain direction on the paper makes a skinny line and changing to another direction makes a fat line. This is how goose quills worked. I mean, after they’d been removed from their primary purpose on the actual goose and addressed with, you guessed it, a “penknife.”

Then I bought a pen made by the Waterman company. It was forty bucks. I thought it was about as much as you could spend for a fountain pen. When I got it home, I found that it had this sort of ball on the tip of the nib that spread the ink in a nice, even line. But I wanted the unevenness of italic, so I snipped off the ball and dragged what was left back and forth along a whetstone until I had what I wanted. Some people would call that reckless. Naw. Several pens later I stood in Office Depot gazing through the locked glass cabinet door at a Monteverde Invincia pen that looked really cool and cost three times as much as the Waterman. It wasn’t even attainable enough to put on my wish list. A few months later I was back in Office Depot buying some rubber bands or paper clips and there, right by the checkstand, was the Monteverde Invincia. For $12.99. “Anything else, sir?” “Um, yeah—give me that pen right there.” Got it home, whipped out the wire cutters and whetstone, and got to work. Not reckless.

(I have a couple of Martin guitars that cost me two grand each. I loved everything about them but the shape of the neck, a modified “V” profile that hurt my hand after about a half-hour of playing. So I filed quarter-inch grooves on the back, crosswise to the neck, then whittled down to the groove depth with my pocket knife ((not my penknife)), then sanded, then buffed, then played. Same with my thousand-dollar mandolin. That’s reckless ((emphasis unnecessary)).)

I inflict this lengthy treatment on all my pen nibs, just to attain what Jane Austen used to get in four minutes with a goose quill and a penknife. It makes it fun to write. All my journals start at the front and go for about 150 pages of actual things that happen in my life. They also start at the back and go in the opposite direction for about 50 pages of messing around with different pens and nib-grinds and colors of ink. Scientists find no logic in this.

Today’s column is appearing in Arial. I looked up “Arial” in my desktop dictionary—no such word. But I found this on Wikipedia:

“The typeface was designed in 1982 by a 10-person team, led by Robin Nicholas and Patricia Saunders… to be metrically identical to the popular typeface Helvetica… so that a document designed in Helvetica could be displayed and printed correctly without having to pay for a Helvetica license.” (The Wikipedia article was printed in Helvetica, presumably with a license.)

IRONICAL SIDENOTE: In 2005, Robin Nicholas said “[Arial] was designed as generic… almost bland… (emphasis added).” But the letter shapes of Arial are based on a font called Monotype Grotesque (I looked. It ain’t. Emphasis added).

In the whole exhaustively comprehensive Wikipedia article, there was no mention made of where the word “Arial” came from. That’s what’s wrong. This font, in itself, has no power to connect us to our roots. In case you were wondering what’s wrong.

(From further research, “Arial” is a Hebrew baby name meaning “sprite,” “lion of God,” and “Jerusalem.” I shudder to consider the violence it would take to harmonize these personae in the mind of an infant. The one comfort is that, being a baby name, it will presumably be changed to “Irwin” or “Golda” by the time the child has become a toddler.)

But cursive not only connects Chelsea Dyreng to her mom, and her gentle reader to his great-great-grandfather. It connects me to Thomas Jefferson, who owned a penknife and jolly well used it.

Imagine Jefferson asking, as he retires to produce the Declaration of Independence: “You sure you want this in ‘Arial’? I think it might be stronger in ‘Impact.’ Of course, it would be less likely to offend His Majesty (might even get in under the radar as a joke) if I did it in Comic Sans.”

Benjamin Franklin: “I think you should do it in ‘Keep On Truckin’.”

Very thoughtful insites, and I enjoyed your words very much (especially the parts about scientists). My husband directed me to a WSJ article last night that had some more "toys" you can try out that will perhaps keep handwriting alive in the digital world. Although, I think if you tried whittling these there is a chance you could get electrocuted. Here is the link: https://www.wsj.com/articles/handwriting-isnt-deadsmart-pens-and-styluses-are-saving-it-1423594704?KEYWORDS=handwriting