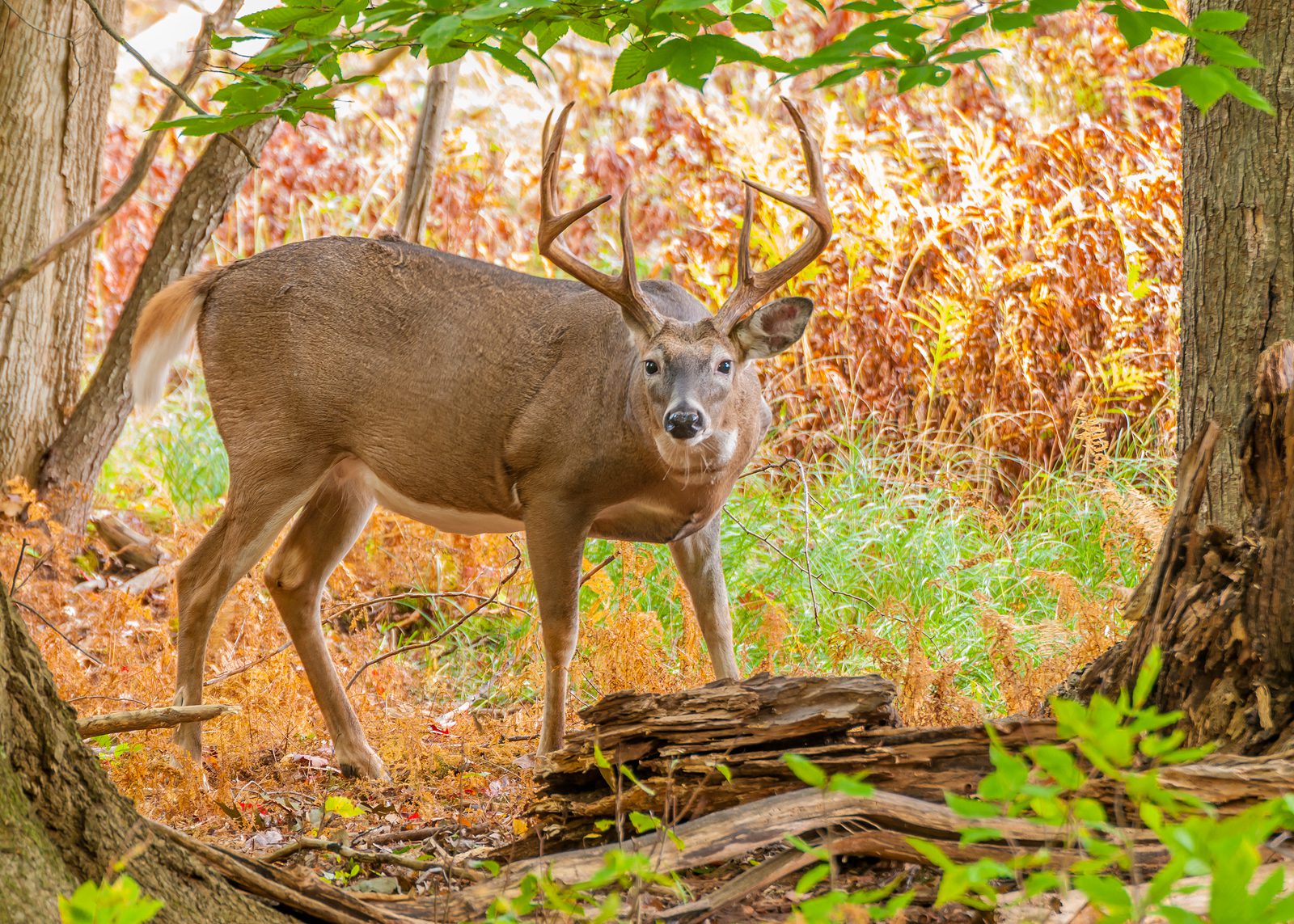 People who live around me hunt deer. The percentage of hunters in town has diminished since the valley’s steel plant went out of business and everybody had to become software engineers and owners of international businesses, but there are still a lot of hunters. I remember several decades ago when my wife went to school with our son to be a teacher’s helper for a day and they showed a nature film. When a deer stepped into frame, all the boys in the class spontaneously went “Bang! Bang! Shoot! Shoot! Take that, you quarry, you!” The sudden outburst of vocal gunfire frightened her.

We have a “Fall Break” around the third week of October that I think began as farmers needed their kids to help harvest the sugar beets. But it quickly devolved into the kids helping their farmers harvest deer—to the relief of the sugar beets.

I home taught a guy who, right up until his early demise from weighing entirely too much (venison, I am told, is quite fattening, despite the scarcity of obese deer), used to start scouting out the movements of specific deer groups (Covies? Prides? Pods? Murders? ((a group of crows is called “a murder of crows”—weird, huh?)) ) in about August. He’d drive up the canyon north of town (“Fort Canyon,” so called because, well, nobody knows—perhaps because the narrow road running up it is called “Fort Canyon Road”) in his big four-wheeler truck and gaze at them for hours through high-powered binoculars. Then in October he’d drive back up there and shoot them from the window of the same truck.

(In California, it’s illegal to shoot anything from the window of a vehicle except a whale. That’s why a lot of window-hunting Californians come to Utah for deer. I don’t know how many window-hunting Utahns go to California for whale—I think the cost of out-of-state whale tags may be prohibitive.)

I myself don’t hunt deer. I have two rifles and a six-gun, but I hunt beer bottles, usually having to settle, however, for tin cans (you find one of those big brown bottles, though, and wow, what a splatter!) In fact, during my third October in Utah I was still so insensitive to the dynamics of the deer hunt that on the 21st of October we rented the Provo High auditorium and threw a concert to launch my first album. Only hippies came.

Even two years later on the same weekend, some shockingly innocent friends and I (not even hippies, really) drove way up American Fork Canyon, above Tibble Fork on dirt roads, to take pictures to use on the cover of my third album. (I mean a 12-inch by 12-inch LP cover, where what we’re really talking about is a mural.) So there, surrounded by guys in blaze orange carrying high-powered rifles, we were—looking for a place without hunters in it (because I’d written no songs, at that point, referencing hunters or hunting, their photo-bombing would have been puzzling to the end user. ((“Photo bombing” and “end user” were expressions not yet invented, however, but it’s the thought that counts.)) )

We finally got out of the car at the edge of an isolated meadow and I wandered off by myself for a few moments, dressed not unlike a deer, when I heard, at a great distance, the dull report of a rifle and an instant later the whiz of a large-ish bullet ripping through the leaves overhead. If you’re lucky enough to live near a Deseret Industries that still has a rack of discarded LPs, you can probably find an album called “Utah” that has on the back and on the lyric sheet (LPs sometimes had lyric sheets) a couple of pictures that we took really quickly before getting the heck out of there. Forgive the “hunted” expressions on our faces.

If I hunted deer now, in my more advanced years, I could probably do my late home-teaching friend one better and shoot them from the window of my house. Our house used to be in the Alpine First Ward, which was aptly named, being the first of the thirty-odd wards in Alpine. Then they divided it (the church is a great divider of people), and we became part of the new ward with an even apter name: Deerfield. They were here first, I suppose, and feel hesitant to surrender the neighborhood. We live on the busiest corner in town, and still the deer nibble all the bean blossoms off the trellis in our garden.

We’re used to battling the threat of birds stealing the cherries off our trees (we net them—the trees, not the birds), but it wasn’t until just earlier this week that I learned that deer, as well, can fly. This I learned from a guy at the ranch supply place. I’d determined to throw up a fence around our garden spot to keep out the deer and asked him how high it should be.

So my nine-year-old daughter and I went to work, and after a long afternoon and half the night an 82-foot length of fence surrounded our garden and stretched heavenward. Happily, the Lord did not confuse our tongues, although I imagine it crossed His mind. I still needed the better part of a Saturday to secure and tighten it and build a gate.

I was about a half-hour away from finishing when I had to drop my tools and get myself to the priesthood leadership session of stake conference. I really grumbled. But it turned out to be about the best meeting I ever attended. Probably because it was less like a meeting and more like a conversation. Our visiting General Authority was Elder Lynn Summerhays, of the Fifteenth or Sixteenth Quorum of Seventy. He and I enjoy a mutual admiration for each other, and a very casual acquaintance, from attending a number of Mormon artist retreats which he helped to sponsor and I got invited to. He’s a great guy, whom I chastised privately during the meeting yesterday (a film clip of Elder Bednar was playing and Elder Summerhays came down and sat in front of me) for not saying more at the retreats, because what he says is redeeming, instructive, charitable, and generally blessing, which I didn’t know (but might have discerned, were I a better discerner) before this conference. I had thought him merely kind, not oracular.

His message was primarily that we minister to “the one,” that virtually everything we do that has any saving power is done by one person for the love of another. Throughout that session and the adult session in the evening he taught us how to do that by doing it himself before our very eyes.

(Between those two sessions, in my shirt and tie and with rain falling all around, I finished the gate for the deer fence.)

He followed the pattern set by revelation to the twenty-seven-year-old Prophet Joseph in what Joseph called “the ‘olive leaf’ … plucked from the Tree of Paradise, the Lord’s message of peace to us.” Or, in a more left-brained designation, the 88th Section of the Doctrine and Covenants, a section I love dearly except for the part about getting up early. Elder Summerhays focused on the instruction “let one speak at a time and let all listen unto his sayings, that when all have spoken that all my be edified of all, and that every man may have an equal privilege.”

It’s about trust, respect, truly valuing the depth and divinity of our fellows. It’s about the quality of love and listening that invites the Spirit to speak through one another. Well, that’s what he did. Like crazy. Along with blessing and praising, advising and comforting each person whose feelings and thoughts he welcomed. If he can do it in a chapelful and half-a-gymful of people, I ought to be able to do it in a house of five. Or for an audience of nineteen. Or in a home teaching relationship of three or seven. Or in a burger-buying-and-selling relationship of two. (Or, of course, in an online column that reaches ((the Meridian Editors keep assuring me)) forty-three obsquatillion inter-galactic sentient species, wherein, against all odds, there is to be found “the one,” who might be, hey, you! Let me think about that one.)

So this fence is not about keeping out the deer “in toto.” The collective deer is not the object of building this fence. It is the one. The individual deer. The one who eats the bean blossoms.

I still have that Utah album--I think it was the one I actually bought from you in Provo in 1970-something. I'm thinking it was after you played for Group. Remember Group? I was a non-LDS freshman at BYU that year & I think I still have all your LPs from those early years. My 20yo son loves vinyl and has been pulling all my old stuff out (good thing I never got around to getting rid of my collection)--I'll have to look for Utah and all the others. Good times.

Wonderful read. I loved it, but think you should minister to "the one" deer by also planting beans on the other side of the fence.