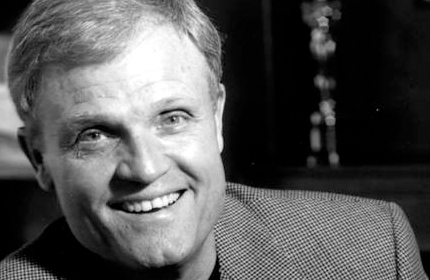 Kieth Merrill is a writer, producer and director of motion pictures. He is a member of the Academy of Motion Picture Arts and Sciences and Director’s Guild of America. He is a two-time Oscar Nominee and winner of an Academy Award for his film, The Great American Cowboy. His films have received numerous festival honors and other awards including an Emmy nomination.

Members of the LDS Church are familiar with Merrill’s work because ofthe films he created for the Legacy Theater on Temple Square in Salt Lake City. LEGACY and THE TESTAMENTS. Merrill also directed Mr. Krueger’s Christmas, a church classic familiar to many.

“There is no such thing as retirement for moviemakers,” Merrill says and remains active in writing, producing and directing films. Merrill is the chief creative officer and co-founder of Audience Alliance Motion Picture Studios, a film company dedicated to the production of highly entertaining films in all genre that embrace virtues and values.

Merrill wrote and directed the Sacramento Temple Youth Celebration. The production involved 5000 youth from 81 stakes.
Merrill is a graduate of Brigham Young University and the former president of BYU Alumni Association .He is a recipient of the Distinguished Alumni Award from Brigham Young University.
Merrill served as a missionary in Denmark. He describes himself as,“A country boy from the farmlands of Utah lucky enough to marry a sophisticated, city-slicker, California dream-girl and BYU Sweetheart, Dagny.” Kieth and Dagny have been married 46 years and reside in the Sierra Foothills of Northern California. They have 8 children and 33 grandchildren.
Here are links to Kieth Merrill on line Wikipedia https://en.wikipedia.org/wiki/Kieth_Merrill
IMDb https://www.imdb.com/name/nm0581303/
Blog https://kiethsworld.blogspot.com/
Filmography ___

In addition to the productions listed, Mr. Merrill has written, produced and directed over twenty five documentary, commercial, and short for clients including the United States Information Agency, Kaiser Steel, RJ Reynolds Co. National Bankamericard, Readers Digest Inc. and others. Merrill has also produced an impressive list of TV Commercials, including “Service on the Run”, winner of the Cleo. LIVE THEATER “It Came To Pass” – Oakland Temple Pageant “More Precious Than Gold” – Sacramento Temple Youth Celebration

The films of Kieth Merrill have won many honors, awards, and international citations. A partial list follows:

Documentaries, shorts and other films:

Kragen/Merrill Family films takes on a new meaning with this…

Telling “Our Story” to All the World

The world believes the creative process is largely based on…

If You Could Choose, What Movies Would You Make?

It's time to do something more than wish there were…

Ambushed at the Movies

Special effects may be getting bigger, but virtues and values…

Everybody Lies About Everything

Hollywood is corrupt. There are no family values in most…

Searching for God on the Silver Screen

"Let us agree to disagree" is a marvelous way for…

Movies are a crucial battleground in the raging war on…

Jimmy Stewart's role as Mr. Krueger will forever affect the…

Scot brought the passions of his youth, the photographic journey…

Has Hollywood Lost Its Heart?

How many movies did you see this year? How many…

How Do We Picture Jesus?

Where did we get our ideas about what Jesus looks…

Passionate About The Passion

No sacrament since The Passion became part of my experience…

A Family Film Made For Families by a Family

If you love Scouting, you'll love this movie. If you…

Hollywood Values and You

In reality, you aren't out of touch with Hollywood. In…

"Film is not an art form. As I write those…

In Search Of the Patron Saint(s)

In order for LDS arts to blossom, we have need…

Tempest in a Teacup – Take II The Broth Boileth Over

Kieth Merrill says, "If Mormon cinema is a tempest in…

Tempest in a Teapot? The Bubbling Broth of Mormon Cinema

Is Mormon cinema destined to be a tempest in a…

Kieth takes us on location to show us with pictures,…

Unless you've been in a coma -- or care nothing…

Selling to the Saints

Kieth Merrill reviews the controversy and power behind Mel Gibson's…

Ben Affleck calls him "the most raw talent". Who is…

Movies that Make a Difference

Jason is the last one to arrive. The movie has…

Movies To See Before You Die

Best of Meridian: The Man Who Would Be Jesus

How did it happen that a Danish actor a half…

Are We Ready for the Book of Mormon Movie? Part 4: A Sampling of Your Other Comments

We received hundreds of lengthy letters answering our question, ?Are…

Are We Ready for the Book of Mormon Movies? Part 3 – Does the Church Have An Official Position?

What are the responsibilities of filmmakers determined to make the…

Are We Ready for the Book of Mormon Movies? Part 2 – Readers Weigh In click here to read the previous article

Two months ago I wondered in writ if you were…

Throwing Stones at Ourselves: LDS Film and Its Critics

Making a movie is much tougher than penning pithy words…

Cleaning Up the Movies, Part II

Are you Ready for the Book of Mormon Movie? (Is the Movie Ready for Us?)

The lid has been lifted on Mormon Cinema. Now this…

Becoming the Vision the Prophet Saw

Cause of Death The Enemy Among Us

If you read my article, The Enemy Among Us, and…

Writing the great American novel may well have been the…

The Enemy Among Us

Their presence is pervasive. They assault our markets, pollute our…

"It was like watching a movie." If I heard this…

Where are the Great Mormon Movies? Part II-There’s a Movement in the Force

Meridian's readers respond with great energy and enthusiasm for the…

Where are the Great Mormon Movies?

Reject It or I’ll Shoot!

A half a million dollars or your testimony?

God’s Purpose For The Artist In The Gospel Plan

Where are our Michelangelos and Shakespeares, our Mozarts and Beethovens…

The Man Who Would Be Jesus

How did it happen that a Danish actor a half…

Behind the Scenes with the Director of Testaments

As the Joseph Smith Memorial Building gets a new film,…

The Latest and Lowest Media Spectacle

If progress is measured by "Who Wants to Marry a…

Holding Ourselves to a Higher Standard

Kieth Merrill on hurling text into the mysterious black hole…