The Influence of Teen Idols 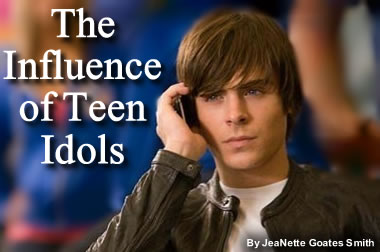 If they haven’t already, your daughters will beg to see Zac Efron in his new movie “17 Again”. If they are like the young ladies who sat in the theater with me, they will simultaneously squeal after many an Efron soliloquy. This young man exudes such charisma, his eyes reflect such sincerity, that whatever his message, the girls were ready to shout, “Yes. If you tell me to jump, I only ask how high?” Knowing his powers of persuasion, do we want our daughters cast under this big-screen spell, particularly when their heart-throb is pontificating about the passion-arousing subject of teenage romance?

With Senior Prom looming, parents might be particularly attuned to questions about the ephemeral high school romance. Mr. Efron is clearly teaching these girls about teenage sex and romance, but what exactly he is teaching is not all together clear. In the movie “17 Again,” Mr. Efron’s appealing character impregnates his teenage girlfriend. Yet when the character grows up, he preaches abstinence. Which message will teens take away from the movie?

If you listen exclusively to Mr. Efron’s words, it might seem that he believes in abstinence, although, he’s about as firm in delivering his message as runny Jell-O. His character tells a class of teenagers not to engage in sex unless they are “in love” and “want to make a baby,” “preferably after marriage.” (Although this is a more healthy message than the one delivered by the teacher in the movie, who passes out condoms, because she believes the chances of keeping teenagers from having sex is as likely as… something I can’t repeat.)

This type of ambiguity is the very approach that has so many of today’s teenagers experiencing premarital sex, along with its profound regrets. Adults who have the courage to send a firm message, “Do not, under any circumstances, in your wildest dreams even think about having sex before marriage,” know that teenagers may still ignore their counsel. How likely is it that teenagers will follow ambiguous directions? “Preferably” is an ambiguous message. It tells our teens that we don’t really think they will take our advice. It doesn’t encourage abstinence any more than the teacher who passes out condoms because she believes abstinence is as unlikely as …..

The other reason the well-intentioned movie, “17 Again”, concerns me is because it clearly preaches “Do as I say, not as I do.” The influential star of this movie gets his high school girlfriend pregnant, turns down a college scholarship to marry her, spends the next 20 years blaming her, and when on the verge of divorce a miracle saves their marriage, they (we suppose) live happily after.

It doesn’t take a psychologist to tell you that actions speak louder than words, and despite Zac’s preaching, his behavior is what youth will be tempted to emulate. Particularly, when he insists that he was totally in love with the most beautiful girl in the school, that he had never ceased loving her… and all that romantic, fantastical, fairy-tale stuff. Young girls who are already hopeless romantics, staring into the eyes of their very own prince charming, who they imagine is a tender and loving 17-year-old will likely be convinced their own transgressions will be trumped by love and any obstacle will be worth it because they too can live happily ever after.

Should we even worry that movie stars have the power to influence popular opinion regarding such crucial issues? We most definitely should. My father wore his hair like James Dean the rest of his life after seeing Rebel without a Cause. My son broke a hood ornament off a car after watching Mrs. Doubtfire. Advertisers spend enormous amounts of money just to have their product seen in a movie. Endorsements from an actor can skyrocket a politician’s popularity. Of course movie stars influence popular opinion–particularly the opinions of malleable teenagers.

It wasn’t difficult to see that the heart-throb in “17 Again” moved his audience, because the audience response was audible. As if on cue, a theatre-full of adolescent girls moaned in unison. Their simultaneous squeals revealed like minds. Even in the dark I could see row after row of young ladies clench their hands underneath their chins, tilt their heads, and bat their eyelashes at the screen. This young boy is clearly teaching our daughters ideas they could embrace, since the ideas are the closest thing to embracing the icon himself.

I’m not saying ban your daughters from this movie. However, pay really close attention to the PG-13 rating. Parental Guidance does not mean innocuous, innocent, or harmless. It means that this movie can generate some excellent discussion about a critical topic. Without a little guidance, young girls could be led seriously astray. However, with firm, undeviating instruction, parents can use this opportunity to help their daughters recognize hypocrisy, point out the consequences of dismissing God’s commandments, and help them remember that fantasy is not reality.

Because all the boys in our home were at a Fathers’ and Sons campout, my daughter and I took the opportunity to attend the movie together. Because the theatre was jammed with squealing, and sighing, and moaning teenage girls, I felt as out of place as the one adult man who had attended with his wife survived the hour plus with jumbo popcorn tubs and unlimited refills.

However, I snatched the opportunity to talk with my 14-year-old, starry-eyed daughter. I asked if she thought that couples who engage in sex before marriage will ultimately live happily after, and she responded, “I guess if someone turns them into a 17-year-old again they could. But that would take magic.”