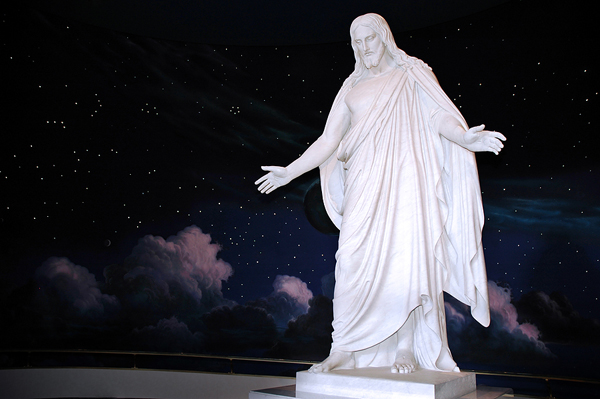 Most of our fellow Christians just don’t get it.

In a July 2011 national survey my firm conducted, 1000 randomly chosen American adults were asked if they believed there is life after death. And if so, we asked, “Do you believe that we will be resurrected with tangible bodies or that we will live as spirits?”

But 51% believe our life after death will be as spirits, and another 11% have no opinion. Can you believe that? President George Albert Smith is quoted in the current Priesthood and Relief Society manual as saying that “a good many people in the world do not know what the resurrection is.” And things haven’t changed much since he said it.

Think about that for a moment. A majority of all Christians effectively deny the bodily resurrection of Jesus Christ … and therefore ours as well!

It’s not because they do not grasp the components involved. In the same survey, we found that 87% believe that people are composed of two parts – a body and a soul or spirit. They simply don’t think deeply about what happens to each upon death.

If the question were posed directly, I’m confident that most Christians would accept the premise that a spirit cannot die. That being so, how can the word resurrection– which means to rise again – apply to a spirit? Only a body that is dead can rise again. Therefore, the concept of a “spirit resurrection” is not logical.

Christ affirmed this very plainly after His resurrection:

Behold my hands and my feet, that it is I myself: handle me and see: for a spirit hath not flesh and bones, as ye see me have.

The Christian world generally accepts that we will live after death, but if they do not understand the true nature of the Resurrection, what hope is there in the present context that they will understand the Atonement?

The Atonement is the central doctrine of the restored Church. The Prophet Joseph Smith said that “all other things which pertain to our religion are only appendages to it.” And President Gordon B. Hinckley said that the Atonement “is the keystone in the arch of the great plan.”

Precisely because the Atonement is so central to Heavenly Father’s plan – so critical to our appreciation and love for the Savior, and to our progress – it is a natural strategy for the adversary to throw his whole arsenal at this doctrine on which all other teachings hinge.

The word atonement appears only once in the New Testament. Surely the early prophets and apostles spoke of it more frequently, but were the scribes, compilers, and translators true to their tasks?

Elder Bruce R. McConkie: “The atonement of Christ is the most basic and fundamental doctrine of the gospel, and it is the least understood of all our revealed truths.”

Hugh Nibley:”[T]hrough the centuries, while heated controversy and debate have raged over evolution, atheism, the sacraments, the Trinity, authority, predestination, faith and works, and so on, there has been no argument or discussion at all about the meaning of the Atonement.”

How has this happened?

I submit that the false and illogical doctrine of the Trinity is preventing the world from correctly understanding Christ’s Atonement.

The Mood is Shifting

The reason for this stoppage is obvious: how does one reconcile a tangible resurrected Christ with a supposed spirit-only, three-gods-in-one Godhead? How, indeed, under these man-made philosophies, does a tangible Being rejoin a supposed ethereal, body-less, wispy spirit entity, what a friend of mine calls an amorphous cosmic muffin?

To try to square the circle, Trinity apologists claim that Christ didn’t need His body after His earthly ministry, so it doesn’t matter what happened to it when He ascended into heaven, allegedly as a spirit, 40 days after His resurrection.

Sort of like a whodunit novel, a case of habeas corpus, where did the body go? Did Christ jettison His body or is it hanging in the closet to be re-donned at the Second Coming so He can show the Jews the wounds in His hands, as per the 13th chapter of Zechariah?

On His way to heaven, did the Savior run into a sign that said, “Trinity ahead; resurrected Beings need not apply.”?

How silly do things have to get before we stand up for truth and say point blank,”You guys are nuts?”

Actually there is hope. We conducted a split-sample test in our national survey in which half of all Christians were asked:

Do you believe the God, Jesus Christ, and the Holy Ghost are three separate Beings, or are they three Beings in one body or substance?

And the other half were asked:

The New Testament says that God, Jesus Christ, and the Holy Ghost are one. Do you believe that means they are one in purpose or one in body?

More people are seeing things our way. The situation is ripe for action.

Time to be Assertive

It’s time to emphasize that we believe in the Godhead, but not in the Trinity – that the terms are not synonymous.

Those who preach that Mormons don’t believe in the Trinity know full well that their audiences will read more into it than mere differences of opinion about the Godhead. These preachers know their parishioners will conclude that Mormons must not believe in the Godhead, and therefore not in God or in Jesus Christ. It’s time to stop this little con.

It’s time to tell people that the doctrine of the Trinity is not biblical. The word appears nowhere in the Bible. Its first recorded use was by Tertullian around 200 A.D.

It’s time to tell people that in the Middle Ages a fraudulent addition known as the Johanneum Comma (a phrase, not a punctuation mark) was inserted into 1 John 5:7, the scripture Trinitarians use to justify their point of view. Earlier manuscripts of this epistle now available to us, however, do not contain it.

It’s time to tell people that the Nicene and Athanasian Creeds were made by man 300 years after Christ’s ministry and did not come from God. With a little political nudge from Emperor Constantine in 325 A.

D., Athanasius and his Trinitarian followers prevailed 316-2 in this great historical debate and the three-in-one philosophy was established as the doctrine of the religion of Rome.

It’s time to reject the Trinity creed as the litmus test of who is or is not a Christian. (Of course, we allow all people to worship how, where, or what they may, and they’re free to disagree with our doctrines. But when they use an intellectually unsound doctrine to tell the world that Mormons aren’t Christians, we will push back. Who made them the referee?)  The Trinity creed is not only not a litmus test of Christianity,  it is a mockery of God. You’ve had a good run, Athanasius;  now get off the stage.

It’s time to tell the world that the creeds are preventing Christians from understanding that the Atonement is more than the Resurrection and deliverance from death. It is, more importantly, the promise of deliverance from hell (the separation from God) and the promise of exaltation if we are true to the covenant we make with the Savior to follow Him and keep His commandments.

To sum it up, when only a fourth of all Christians have a correct understanding of life after death, we members of the re-established original Christian church must become more assertive, blow the whistle on the false litmus test by which others charge that we Mormons aren’t Christians, and challenge the Greek-besotted philosophy of a molecular-unity Godhead.

We have been silent for too long.

Gary Lawrence is a political pollster and author of “How Americans View Mormonism” and “Mormons Believe … What?!”