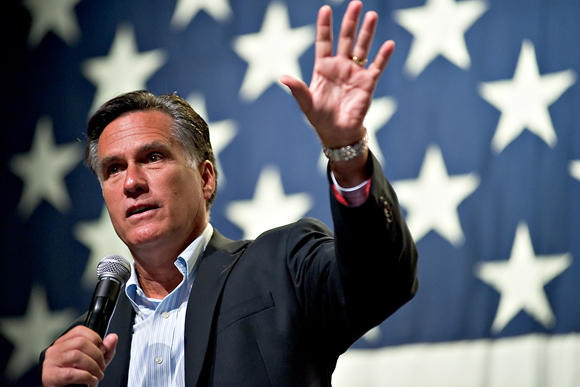 Most of us Meridian Readers know something that most Americans have not figured out yet. When voters figure it out, they are in for a big surprise. And a happy one! It has to do with a certain THING.

It is the thing a lot of them say is the reason they are for Santorum instead of Mitt…..

It is the thing that they say makes them unenthusiastic about Romney…..

It is the thing polls reveal as perhaps his main weakness….

The surprise is that that THING, is actually Mitt’s greatest strength. The thing is called by many different names but is always the same thing:

The thing is “Personal morality and values” which is the reason primary voters give for preferring Santorum to Romney.

The thing is “Faith and Family” which is Santorum’s theme and logo which he uses to try to separate himself from Mitt.

The thing is a “core of beliefs” that the media keeps saying they can’t find in Romney.

Personally, we believe that Santorum is a family oriented person of faith. But this is a similarity and not a contrast with Romney.

The irony is that the man who right now is losing the family and values vote is a faithful husband of 42 years, a Mormon Stake President, a devoted father of five highly moral sons, a man who worked for a dollar a year to save the Olympics, and someone who has probably given more time and money to charity than any Presidential candidate in history.

Will voters eventually find this out? Of course they will. All things eventually come out in our seemingly endless American political campaigns.

Why doesn’t Mitt talk a little more about these things? Why doesn’t he brag a little bit about his great family and his volunteerism and his Church service and his integrity? Part of the answer is that he thinks campaigns should be about policies and solutions and the ability to govern. But the other part of the answer is something voters don’t know about Mitt and something voters don’t value very much in politics: It is humility. Mitt has a certain humility that makes it hard for him to flaunt the things that he thinks of as his duty and his responsibility and his faith rather than as some kind of feather in his cap.

It’s the same reason that he and Ann are a little uncomfortable and awkward in talking about their wealth. They think of their financial well-being as a stewardship, not as something that makes them better or more privileged than others.

You may not see too many pundits and media types talking about humility. And you may not see too many candidates displaying it. But this idea of stewardship and responsibility and duty may actually be the most important qualification for high office. It was a quality of George Washington, who, by the way, was the wealthiest President we have ever had.

Here’s a prediction: As this long and tedious campaign wends its way through nomination and finally to the November election, Mitt Romney will continue to be viewed as the most competent and practical candidate, but he will also gradually be revealed to be the most moral, most family-committed and most values-driven candidate (and the most personally humble.)

And that will be the happy surprise!

And despite all of the predictions that the general election campaign will be full of attacks and negative campaigning, it is likely to be between two family-prioritizing men who will each make the case that they are loyal to their own wives and children and that they care about the families of every American. And that just might make for a November campaign that takes a higher road than most people think it will. It might even become a campaign that we want our children to watch!