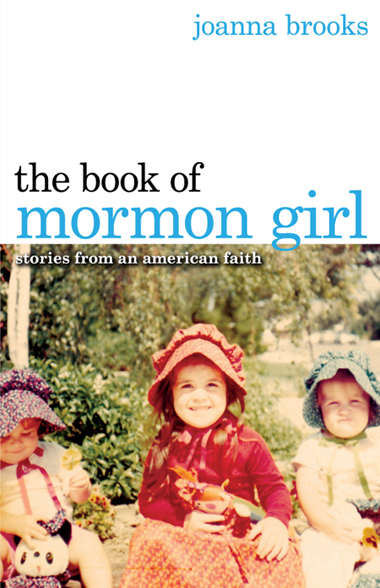 n her memoir, Book of Mormon Girl: Stories of an American Faith, Joanna Brooks describes a childhood that in some ways could have been my own: running around barefoot in the salty air among the orange trees of southern California, watching Donny and Marie Friday nights as we sat way too close to the TV, excitedly yanking on strands of green shag carpet during their variety hour. My Marie doll sat next to me. My mom, too, stayed home and canned in our tiny house, six kids, two adults, and a couple of dogs crammed into 3 bedrooms. Buckets of wheat were everywhere, and a couple of huge green water barrels anchored our back patio. We went to church faithfully.

Her memoir mentions some more events that are less typical of your average LDS childhood: a focus on the end of days, a deep-seated fear of devil worship, feeling guilty for even looking at a Coke. As a reader, I wondered if she remembers these sinister things most clearly and chooses to focus on them because it gives her a reason to have left in the first place. The point she makes is not that she left, because she admits that. The point is that she returned. The book is her explanation of not only why she left, and but why she needed to come back.

This is the message borne by Joanna Brooks in Book of Mormon Girl: Stories of an American Faith. Let’s get some things out of the way before we move on: yes, she is a rabid and probably radical feminist. She was a vocal supporter against Prop 8. She has gay friends, and enjoys pointing out which of her most conservative and orthodox friends have gay children. And yes, she is a very vocal critic of the Church, and promotes and publicizes herself as such. She knows just as well as the rest of us, that she is not the typical or expected Church member.

As a professional book review, the summary would be that it is compelling, well-written, and a fascinating look at the events that created a strong-willed, independent, divisive woman. But from the perspective of a faithful LDSChurch member, the book has many facets. She does, in the last six pages, dive into gay marriage. She also confronts head on the subjects that have been difficult for her to comprehend, stomach, and accept in the Gospel. And much to the surprise of the two authors of this article, both conservative, active and faithful LDS women, who fully expected to dislike the book and Sister Brooks, we found a woman we could relate to in some ways.

We identified closely with her description of accepting her body and physical appeal. In her chapter on Marie Osmond’s guide to beauty, she crashes head-on into the physical ideal so many of us feel we must attain. This is not a gospel ideal, but a societal one that has somehow translated into our culture. This chapter is a parody, and we found it hilarious as she skewered the idea that finding your make-up personality and 10 minutes of calisthenics a day will lead you to your perfect eternal companion. She uses humor deftly to highlight that focusing on physical perfection instead of spiritual beauty may not be the best use of our time.

Again we identified well with another part of the book that might make some LDS readers uncomfortable as she relates her experiences finding the tampons of her young women leader. She speaks of this leader affectionately, but this giant tampon seems to be a catalyst for her change in attitude and unquestioning acceptance of what she has been taught. She is 15, and she and her friend find their leader’s box of tampons in the back of the van as they head home from girl’s camp. Her friend laughs, but to Sister Brooks, this tampon is symbolic of changes she isn’t willing to make. A sign of who she is supposed to become. It symbolizes many children, and somehow in her mind this goes on to becoming a sister wife so she doesn’t have to keep another righteous sister out of heaven because of her selfishness and unwillingness to share her husband. (This is where we stopped identifying with her.) She raises the topic of polygamy, as it was explained and taught to her, multiple times throughout the book. One on hand she is fair and upfront, as the question of polygamy seems to be what initially pushes her away from her beliefs. But the question is valid because so many of us struggle with a polygamous heritage we had no hand in creating but are still judged for today. She is not afraid to discuss the “hard subjects,” that many people willingly and gleefully sweep under the rug.

Now let’s set aside the unsavory aspects of who she is and move into the heart of the story. She is clearly an intelligent woman, blessed with this for a reason by a loving Father who sent her here. She struggled with her faith and her identity for many years, suffering in a self-imposed exile because she believed who she is wasn’t compatible with a faith like ours. For this reason, her story is compelling. At times it is uncomfortable, but mostly her memoir is an engaging look at her fight to come home.

Some may argue that her hybrid Mormonism encourages others not to live the gospel fully. That could be true if we believe that her word is very influential among members of our church. Further, she gives voice to thoughts and feelings many of us struggle with in finding our testimonies and a place where we know we belong. A poignant example of this is when she took her two young daughters to church around Pioneer Day, and they heard “Come, Come ye Saints.” She had sung this to her children to pass on part of their proud legacy of pioneer women, and when they heard it, they began to dance. In sacrament meeting. She wanted her daughters to know their heritage, even if it was a heritage that she struggles with.

We both found her open and frank description of her personal crisis of faith to be something we could easily identify with. As so many people have done, we have both been through that dark and terrible place where we seek so desperately to find our own testimonies and come out the other side. We identified with her struggles, related to her, and felt her pain. But in the end, she chose one path that led her to leave the Church for a period, we chose another, but from this memoir we understand why she went her own way. In that respect, there is much to gain from reading her account as we all have friends and family members who continue to experience their own crisis of faith.

Overall, we found Sisters Brook’s memoir to be disturbing, amusing, and as strange as it may sound, faith-confirming. We too have struggled with many of the questions she faced. We have questioned our beliefs, and ultimately, we both chose to live the gospel fully. One of us has everything Sister Brooks was taught to work for in her youth: a temple marriage to a strong (and cute) priesthood holder, an eternal family, a ward calling, and a stable home life.

We are both active, we both have testimonies, and we both still work to learn more. We all have plenty of work left to do because we are not perfect. Far from it, in fact. But the difference between all of us and Sister Brooks right now, is that she has spelled out in a book her imperfections and short comings.

Is it up to us to judge Sister Brooks for the choices she made? We don’t think so. Reading her memoir reminded us how happy we are that we did not choose to extend our personal exiles from the church as she did because, like her, we know this is where we belong. It took her much longer to reconcile those feelings within and come home, but she did come home. She represents many around us, part member families who want to live this gospel because they know of its truth and goodness. They know it is where they belong but feel judged and hesitant to return. Even if no one around them actually judges them (and most likely we are thrilled to see them walk through the doors when they do come to church), we teach an ideal that they with their choices may never attain in this life. It is important for us to make sure when they come, they feel welcomed and loved. Give them a reason to want to come home.

In the end, we each know that we must have a testimony of a few things: the truthfulness of the Book of Mormon, of its restoration by Joseph Smith, of Latter-Day prophets, of the existence of my Father in Heaven and of the atonement of my Savior. We don’t think Joanna Brooks would have bothered coming back to church if she didn’t believe these things with all her heart. We wouldn’t recommend her memoir to many people, just because much of what she says is designed to make people uncomfortable. She is a rebel that wants to rock the boat, and that is a boat I don’t feel needs rocking.

Despite that, she reminded us why we came home.

Where Can I Turn For Truth?