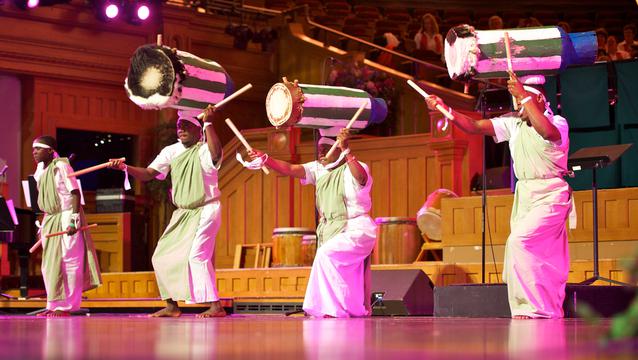 “Many Faiths, One Family” was the theme of the Interfaith Musical Tribute, which was held in the historic Mormon Tabernacle on Temple Square in Salt Lake City Sunday, 26 February 2012. The free concert was under the direction of the Salt Lake Interfaith Roundtable and hosted by The Church of Jesus Christ of Latter-day Saints.

Buddhist, Christian, Hindu, Jewish, Muslim, Sikh and Unitarian were some of the faiths participating in music and spoken word. The audience was inspired by the music and the beauty of the performers’ traditional clothing. Music ranged from drumming and flute to a Latter-day Saint children’s choir and the First Unitarian Church Chancel Choir.

Interfaith Roundtable chairman Alan Bachman expressed appreciation that so many faiths were represented not only performing but in attendance as well. “The Tabernacle, a place of peace, was full.”  He said that we are no longer just getting along; “we are reaching interfaith levels now where we love each another.”