NO ESCAPE by Anna Jones Buttimore 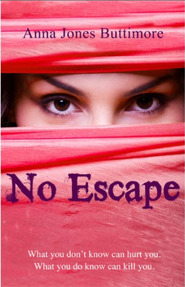 No Escape by Anna Jones Buttimore is a different sort of Romantic Suspense novel than most published for the LDS market though it’s every bit as exciting. First the author is English, but the novel will likely be read by more Americans than Brits. It takes place not only in Wales, but in a remote area of that country, not typically on the agendas of most American tourists and is viewed from the insider viewpoint of a woman who lived there for seventeen years. Each chapter begins with a brief description of the almost unpronounceable Welsh town or area pertinent to the action taking place in that chapter.

The story begins with Michael, a New York cop, who is beginning a six month exchange with a policeman from Wales. He accepted the exchange because the recent death of his wife has left him lonely, depressed, and there’s too much in the city that is a constant reminder of the beautiful woman he loved and was married to for a mere two years.

Catrin Pritchard has also run away from a place and memories. Beaten and abused by her drunken father, she entered into an intimate relationship with a young man she hoped would marry her if she became pregnant so she could escape her father. When he let her down too, and her father, in a drunken rage, threw her out of his home, she grabbed the opportunity to get as far away as possible, have her baby, and live a quiet life free of men. She does well, even enrolls in college, for five years until a half brother she knew existed but she had never met, appears on her doorstep and moves in with her and her daughter. He’s good to them in many ways so it is a complete shock to discover he is dealing drugs. To protect her daughter, she decides to call the police.

Michael is one of the two officers sent to Catrin’s home to arrest her brother. Feeling remorseful for turning in her brother, she takes a drastic step to hire a barrister to represent him. Instead of being pleased about her support, he kills himself and suddenly Catrin and her daughter are the objects of someone’s wrath. With their lives in danger, Michael seems to be the only one who takes the threats against them seriously.

Catrin is nothing like his beautiful, socially adept wife, yet there is something about her that draws Michael to her and has him re-evaluating his marriage. A quick trip back to New York has him seeing many things in a new light.

The major characters in this story are a little better developed than in most romantic suspense novels and there is considerable growth shown as the two emotionally battered protagonists work their way toward dealing with and overcoming their pasts. The plot works well and accelerates quickly as the suspense portion unfolds. In addition there is the added charm of the characters’ confusion as they discover subtle differences in meaning and spelling of words common to both cultures, the differences in accommodations, social programs, and legal procedures. I’ve read and enjoyed all of Buttimores’s books and consider this one, by far, her best.

Anna Jones Buttimore was born in England, but spent seventeen years of her life in Wales before returning again to England. She loves the peace and quiet of the Welsh countryside and the Welsh Language. She and her husband, Roderic, have three daughters and have made several trips to America where she delights in discovering both the differences and similarities in the spoken and written language that both claim is English, their principle language.