The New 2012 For the Strength of Youth | Meridian Magazine

The New 2012 For the Strength of Youth 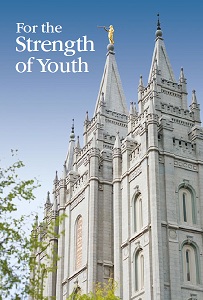 For many Latter-day Saint youth, the “For The Strength of Youth” pamphlet is practically scripture. Every morning at seminary youth read from the pamphlet before ever delving into the Standard Works. Unlike the Standard Works, FSOY has needed re-writing on occasion, and 2012 was such an occasion. I’m not an expert on every one of the 18 subjects FSOY addresses, however I can speak with a bit of authority on the subject of Dating. The changes FSOY has made on the topic of Dating are important changes, and an appropriate response to an urgent plea.

In one of my books on dating, in a chapter, “Please Don’t Call it Dating” it says, “Talking about “dating” is like talking about “love.” The word has so many meanings, it’s hard to know exactly what you are talking about….People who teach you about dating might talk about anything from how to put a napkin in your lap to how to keep your hands out of your date’s lap.” (Unsteady Dating: Resisting the Rush to Romance, Cedar Fort, 2012)

Clearly there are at least two types of dating: casual dating, where a couple is NOT exclusive with one another, and serious dating where they are. When youth casually date, they may pair up for the duration of an event. However, when they seriously date, they are a pair, an item, to quote Facebook, they are “in a relationship.” Too often when our youth think of “dating” they automatically think of the serious kind. They think when the FSOY says, “Do not date until you are at least 16 years old, it means you can begin dating seriously when you turn 16.”

The old FSOY included a phrase, “Not all teenagers need to date or even want to. Many young people do not date during their teen years because they are not yet interested, do not have opportunities, or simply want to delay forming serious relationships.” I used to cringe when I read this statement because it sounds like forming serious relationships is inevitable while dating. This section has been entirely removed form the 2012 FSOY.

You and I know that the type of dating youth are supposed to do when they turn 16 is not about forming serious relationships, but the youth didn’t know that.

I was speaking to a group of Youth at BYU Education Week on the topic of dating and I quoted this above statement from “For the Strength of Youth.” I explained that at age 16 youth are to begin casual dating, where they are NOT exclusive, but they should not engage in serious dating where they are exclusive. I quoted President Gordon Hinckley who said, “When you are young, do not get involved in steady dating. When you reach an age where you think of marriage, then is the time to become so involved. But you boys who are in high school don’t need this, and neither do the girls.” (Nov. Ensign 1997)

After one class a young lady handed me a note:

“We just wanted to point out that as youth, we believe the phrase, “not all teenagers need to date or even want to” is talking about the “just friends” stage, not the “going steady” like you said in class.”

This young lady completely misunderstood the FSOY. She thought it meant not all teenagers wanted to go through the casual dating stage, but definitely wanted to experience the serious dating stage. I cringed again. I was so disturbed by her misunderstanding, I wrote to the Aaronic Priesthood Committee of the church, whom I discovered is responsible for the content of FSOY. I explained how I thought this phrase was misleading, and youth were interpreting it to mean that dating was synonymous with getting serious. I wanted to sing Hallelujah when I saw that misleading phrase had been removed from the 2012 FSOY.

Another phrase that has been removed is, “You may want to invite your dates to activities with your family.” If you are dating seriously, sure, it’s a good idea to invite dates to activities with your family. However, when you are just casually dating, as youth should be while still in their teens, inviting a date to a family gathering legitimizes the relationship and makes it seem far more serious than it should be (or likely is).

In a talk I gave at the Brigham Young University Family Expo, “No More Double Messages: Helping Adolescents Choose Abstinence,” I explained how parents often push their youth into serious relationships prematurely, and one of the ways they do this is by inviting a casual date to attend family gatherings. A casual date is not part of the family. A parent should not be courting a casual date, campaigning for him/her to eventually be part of the family. Courting is not appropriate in high school. Once a couple is in a “position to marry” as President Hinckley said, then is the time to begin courting.

President Hinckley was very vocal about the subject steady dating. In the same talk I just quoted he said to young men, “Have a wonderful time with the young women. Do things together but do not get too serious too soon. You have missions ahead of you, and you cannot afford to compromise this great opportunity and responsibility.” (Priesthood session October 1997 conference, reported in Ensign November 1997.)

President Hinckley was clearly teaching that serious dating is not appropriate before a young man goes on a mission. When President Monson has elected to mention the subject of dating, he has twice referred to FSOY. Rather than detailing his own counsel to youth, President Monson deferred to FSOY. (“That We May Touch Heaven,” Nov, 1990, and “Preparation Brings Blessings,” April 2010 Sessions).

Because the term “dating” can be interpreted so many different ways, the 2012 FSOY begins by defining the word dating. It clearly states, “A date is a planned activity that allows a young man and a young woman to get to know each other better.”

I think that’s a pretty good definition. But it illustrates the navete of a couple who engage in an on-line romance, but never go on a planned activity yet claim they are “dating.” They might be “in a relationship”, but they are not dating. (The fact is you cannot truly get to know one another over the internet.) It also reminds these youth that when they become young adults who are in a position to be dating seriously that “hanging out” is not the same as dating, and they need to plan their activities.

FSOY’s subsequent counsel, “When you begin dating, go with one or more additional couples. Avoid going on frequent dates with the same person,” helps youth to whom this pamphlet is directed keep their dates casual, so they are NOT exclusive, do NOT pair off or become an item.

The concept of casual dating while in high school was so novel when I first began speaking and writing about it that my adolescent son accused me of “trying to change the world.” The idea that having a high school sweetheart was okay, and even expected was as ingrained in our culture as the palmetto trees are in my Florida back yard.

The wonderful blessing of having prophets that speak for our day, and guide us when the “traditions of our fathers” are no longer appropriate is absolutely obvious when teaching our youth about dating. In 2012 people rarely marry right out of high school, therefore function of high school romance no longer exists. FSOY is simply staying relevant for youth in 2012.