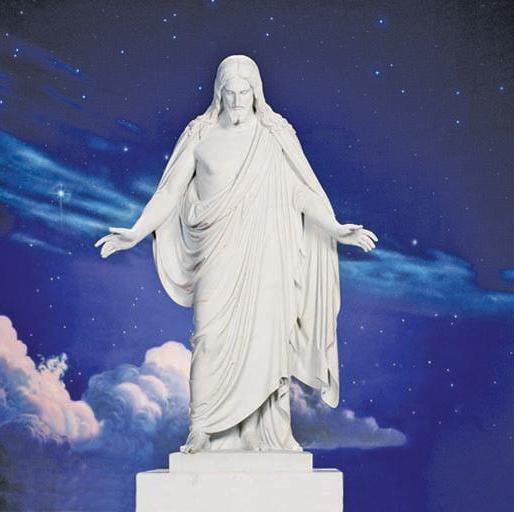 The claim that we Mormons aren’t Christians is probably the most frequently heard rumor or misconception about us in today’s society. Our usual answer is to point to the name of the Church or the first Article of Faith, or something similar. Sometimes that satisfies the accuser; most of the time it isn’t enough.

The following chapter from my book “Mormons Believe … What?!” is how I respond to the charge. Maybe you will find an idea or two that will help you.

Sometimes it seems that the only way certain Christian groups will accept us Mormons at the table is if we’re on the menu.

The reasons stem from disagreement over the physical characteristics of the resurrected Jesus Christ and the nature of the Godhead, topics we will discuss in later chapters.

Mormons believe that anybody who worships Jesus Christ, as we do, is a Christian, and that each individual deserves to be his own arbiter on the matter.

I don’t think this definition is complicated, but apparently for one of my former neighbors, it was. He was convinced that I couldn’t possibly be a Christian “because you’re a Mormon,” as he so logically put it.

Sensing the fruitless journey I was about to embark on, I nonetheless asked him what it takes to be a Christian, and the conversation went something like this:

“You have to believe that Jesus Christ is the Son of God.”

“I believe that with all my heart,” I replied.

“You have to believe that Christ died for your sins on the cross, was buried in a tomb, and arose on the third day in triumph as a resurrected Being.”

“Absolutely agreed. What else?”

“Well, you have to accept Jesus Christ as your Savior.”

“I have done that, and I’m very grateful.”

“You have to pray to the Father in Christ’s name.”

“Every morning and every night and three times a day in blessings on the food. What’s next?”

Every definition he presented, I met. Roger that. Check, check, and check. Still not good enough.

It boiled down to one simple reason: I wasn’t a Christian because I wasn’t a member of his denomination.

This is the you-can’t-belong-to-my-tree-house-club thinking we Mormons often face from some in the Christian community.

Where are those striped-shirt referees when you need them?

My polling firm asked our sample of 1000 Americans when they believe Christianity began. Here are their perceptions:

Only one in five thinks the answer lies any further back than Christ’s birth.

So here is my question: If Christ is indeed the Son of God, which we affirm in the strongest of terms, does it make sense that God the Father would have given a different religion to our first parents, Adam and Eve, than Jesus Christ would teach when He was on the earth? Of course not. We reason from this that Christianity did not begin with the earthly birth of Jesus. The religion that Adam and Eve were taught by God was Christianity.

Then does that mean that every Old Testament prophet was a Christian? Yes, that is what we believe.

From the beginning, Adam and Eve taught their children Christianity – that the Son of God would one day come to the earth, teach His doctrines in person and then atone for (that is, make forgivable) all the sins of mankind from the beginning to the end.

In time, the descendants of Adam rejected it, causing a falling away from true teachings, what we call an apostasy. Thus began a pattern: True Christianity was given to a prophet – Adam, Noah, Abraham, Moses, Isaiah, among others – followed by a falling away from those teachings. But in each era of time, each prophet knew of Christ, knew Him to be the Son of God, and even knew what His name would be. That is why so many instructions given to people in Old Testament times were designed to focus their minds on the coming of the Messiah. In fact, we believe Jesus Christ is the Jehovah of the Old Testament and He, Himself, gave those instructions to those prophets.

All of which means Christianity has been periodically manifested throughout history, not just since the time of Christ.

The Reason for Our Name

So what does this have to do with Mormonism?

Look at the nine words – the understandable but often overlooked five and the funny four – of our formal name: The Church of Jesus Christ of Latter-day Saints.

The word of, signifying ownership, appears twice. First and foremost, it is The Church of Jesus Christ – that great Being we worship, the Son of God. It belongs to Him and He specifies the rules – the doctrine, organization, ordinances, commandments, and who is assigned to do what.

Second is the phrase “…of Latter-day Saints.” The church also belongs to all of us today – that is, everyone and anyone who freely chooses to play by those rules. To them Christ gives authority to act in His name to bring others to an understanding of what He has done for us.

Jesus Christ calls this secondary group of owners or adherents saints, a term condensed from the phrase “sanctified ones” and simply meaning members. (Catholics apply the term to someone who can be supplicated to intervene with Deity on their behalf. We do not subscribe to that definition and it is not applicable to our name.)

… of Isaiah’s-day Saints, and of course

… of New Testament or Former-day Saints

… each manifestation of Christianity being separated by a period of apostasy.

Our name understandably causes confusion when one wishes to use a shorthand reference.Here are our preferences:

Such an apostasy, or general falling away, we believe also occurred after Christ’s own mission. Christ presented His gospel and men changed it. They changed the ordinances such as the form of baptism, they changed the organization, and they changed many of the doctrines. In fact, as Americans view Christianity today, only 36% believe things are the way Jesus Christ intended, while 57% believe something went wrong along the way.

Mormons claim that true Christianity has again been brought back. It is the same religion – the same teachings, same doctrines, same authority, same commandments, and, adjusting for unique circumstances of each era, the same organization – as existed in previous eras.

The last four words of our name tell the world our claim to be the final chapter of Christianity before Christ returns to the earth in glory. In nine simple words:

We claim to be the re-established original Christian church.

My question to my former neighbor and those who say Mormons aren’t Christians: Why would we claim to be the original of something if we are not at least the something?

Gary Lawrence’s book “Mormons Believe … What?! Fact and Fiction About a Rising Religion” answers 24 misconceptions and rumors about the Church. Visit MormonsBelieveWhat.com