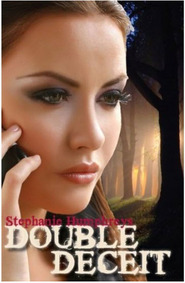 Divorcee or widow? Stephanie Humphreys begins her suspense novel, Double Deceit, with the return of Elaina Bryant to the home she ran away from ten years earlier when she eloped with Spencer Bryant. The years have not been kind to Elaina as her teenage romance turned into a nightmare of imprisonment and abuse.

When she finally discovered a way to escape and file for divorce, Spencer and her daughter were killed in an accident. Heartbroken and filled with grief and guilt, she returns home to find her mother is dead. She moves in with her sister in the family home, renews her friendship with a high school friend, and finds a job at a bookstore where she is drawn to her boss. With her sister’s encouragement she begins attending church and participating in young adult activities and family home evenings.

When Elaina begins getting threatening letters and phone messages, even close friend, Peter, who is a police officer, doesn’t quite believe her and attributes her stories to grief and guilt since she can’t produce the letters which have mysteriously disappeared. Her sister is falling in love with a man she met on a church group excursion and so involved in her romance, she too dismisses Elaina’s fears.

Elaina is uncomfortable with her attraction to Ryan, her boss at the bookstore. He makes it clear the attraction is mutual, but she’s not ready to allow another man into her life. Ready or not, she finds herself falling for him and as their relationship progresses so does the mysterious harassment.

As Elaina’s plans to begin a new life fall apart, she too, questions her sanity, and just as she glimpses the possibility of love and happiness in her future, she has reason to believe her life and that of her sister and the man she has come to care about are in danger.

This book has all of the elements of a good suspense novel. The heroine has taken an emotional battering and has no confidence in herself, but struggles on to achieve a sense of self worth and the ability to be independent. People around the heroine have their own problems to deal with and though they love Elaina and want to help her, they understand her past and her grief, making them more sympathetic than believing when she reports hearing her baby cry and receiving threats from her dead husband.

As is often the case with short romantic suspense novels, character development doesn’t run deep, but is satisfactory for the needs of the story. Elaina is more fully developed than other characters and the reader can see her progression from a frightened, abused woman to a woman determined to have answers, face her problems, and protect those she cares about.

The plot moves at a comfortable pace and I was left questioning only a couple of points which would give away too much of the story to discuss here. The suspense is stronger than the romance, but fans of either genre will not be disappointed by this book.

Stephanie and her husband have a combined family of six children. They live in Alberta, Canada;. She serves on her community’s cultural arts board and on the local public library board. In addition to her involvement in community affairs, she spends as much time as possible with her family or reading.