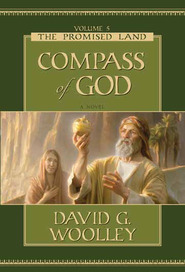 A powerful new addition to The Promised Land series, Compass of God, is available now.  This fifth volume is well worth the three year wait for readers of this greatly loved Book of Mormon series which began more than ten years ago.

Compass of God focuses not only on the Liahona, but on obedience to God as the sure directional element in the lives of Lehi, his family, friends, and the people of 587 B.C. Jerusalem.

Laban is dead and the blame for his beheading falls on Aaron, son of the blacksmith Jonathan. His brother Daniel brutally attacks him and leaves him for dead, though Laban’s death places him in a position to advance to military commander in Laban’s place.  Daniel and Chief Elder Zadock conspire to steal Jonathan’s property and enslave the family for their part in hiding Aaron and for assisting Lehi, Mulek, Zoram, and others to escape Jerusalem and the fate Zadock had planned for them.

Mulek returns secretly and is recognized by only his mother and Jonathan’s younger daughter, Sarah.  He has in his possession a strange object entrusted to him by the captain of the Phoenician ship where he has served for the past two years as a navigator. The object is a compass and is a highly sought after direction finder that has empowered the Phoenicians and the ancient Chinese to sail to locations unknown to the rest of the world.  Both the Egyptians and Babylonians employ spies and extra ordinary means to locate the compass and acquire it for its military potential.

Ishmael’s daughters despair that their prospective grooms, the sons of Lehi will ever return for them.  Only the youngest is willing to wait indefinitely for Nephi.  The other three ask their father to set aside their betrothals and allow them to form new contracts.  The oldest daughter falls in love with a part Jewish/part Egyptian oil trader, but when she discovers he’s involved in something far more dangerous than trading for olive oil with her father, her heart is torn.

Jerusalem serves as a vassal state to Babylonia, but has cultivated a steady and lucrative trade with Egypt.  Amid plots and counter plots along with an abundance of spies for both major powers, the Prophet Jeremiah warns of Jerusalem’s destruction and calls for a Sabbatical Jubilee, a time when all debt is forgiven and slaves are freed.  Failure to return to this ancient law he warns will bring about the destruction of their city and country.  This infuriates Zadock and the wealthy of the city and they seek to rescind King Zedekiah’s calling of the Jubilee.

Into this political and religious turmoil, Lehi’s sons are sent one last time back to the city to claim their brides and lead Ishmael’s family back to their secret dwelling place in the desert.

This story contains a large cast of characters and Woolley has done an exceptional job of making each distinct and real through both voice and actions.  We see great growth in Ishmael’s oldest daughter and in Jonathan and his younger daughter, not so much in other characters, but since this is a series, maturity and growth of characters is greater for some in one volume than in another.

The action moves forward in a comfortably fast pace and even though this volume is only a small slice of the overall epic story, it is satisfyingly complete, while leaving the reader anxious for the other pieces of  the larger story.  The romance between Ishmael’s daughter, Nora, and the oil trader, Ammon, is a little too much Katharina and Petruchio to be realistic, but it does generate a great deal of sympathy for the woman students of the Book of Mormon know will later become Laman’s wife.

Woolley excels in providing a rich background for his novels.  The reader already knows the basic details of the story, but the scriptural account becomes easier to understand and visualize as the laws, politics, customs, geography, history, and intrigues of the day are brought into the story in an easy to understand, real, and plausible way.  For the reader who wants a deeper analysis of the background story, Woolley provides more than sixty pages of detailed historical notes and bibliography.  This historical notes section is fascinating and informative with well-documented research.

David G. Woolley was born in Lethbridge, Alberta, Canada.  He received his doctoral degree from Brigham Young University.  He was head soccer coach at BYU for six years and has been the head coach and director of development with Rangers Soccer Club.  His deep love for the Book of Mormon has made it the object of intense study for many years.

I just finished reading Compass of God, well, the story part, anyway. And I was left thirsting for more. I do so hope that Bro. Woolley is continuing the story of the exodus of Lehi and the others through the wilderness to the shore and beyond, to the Promised Land. All five of the books have been so engaging and so enlightening. I have loved every single word and reading the chapter notes has broadened my understanding of the time of these great spiritual leaders. I know that Bro. Woolley has had some health problems and I pray that they have been resolved satisfactorily. I just hope that he'll continue writing these wonderful stories. They are so uplifting.