Do you have a Christmas memory to share with Meridian readers?  Send it to [email protected] 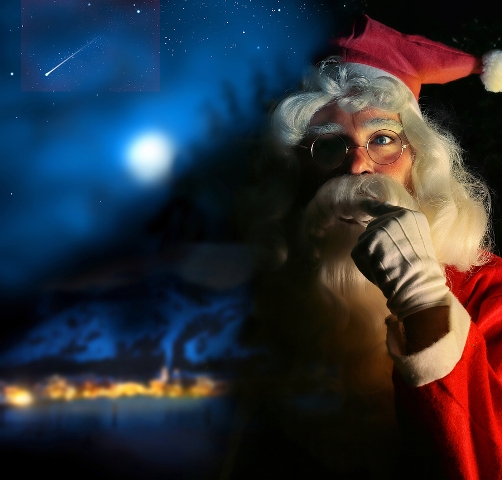 The idea was conceived when we lived in Kelowna, British Columbia  and they asked my husband to play Santa at the Ward Christmas Party.  At first he was insulted.  “They only asked me because they think I am built like Santa.” he scoffed.   He refused the assignment.  But as time went on and he thought about it more, he came up with a better idea.  “Wouldn’t it be fun to dress like Santa and visit some families who have young children?”

I remembered how thrilled I was on Christmas Eve in 1948 when Santa came to my house.  Now, I realize Dad probably arranged the visit to help with our disappointment because Mother was still in hospital after giving birth to our baby sister.  Santa gave me and my older sister each an apple and told us to be good girls and go to bed early, so he could come back later.  Mom and our new baby sister came home on Christmas Day.  We fell in love with the beautiful new baby and were so excited to have Mom home for Christmas.  Encouraged by this sweet memory, I made a Santa suit and my husband did make a great Santa.

At the time, our kids were all teenagers and they weren’t terribly thrilled to hear Mom and Dad would be tramping all over the town instead of being home with them on Christmas Eve.  We would go out as soon as it got dark and we assured them we would be home by 8:00 or 9:00.  How much time could it take to stop, present each child with a candy cane, tell them to go to bed like good boys and girls, and promise them Santa would be back later?  The first outing taught us a lot.  my husband had so much fun talking with all the kids and telling them Santa stories.  Much to our own kid’s chagrin, we finally arrived home at about midnight, but we assured them it was a good thing to do.  The next year they even made suggestions as to families we should visit and stories he could tell.  They decided to use the time to wrap up their own Christmas giving efforts.

In spite of all the fun this exercise was for Santa, it hadn’t been half as much fun for me.  Delivering him to each house and waiting in the car was not my idea of a great way to spend Christmas Eve. So I made a Mrs. Santa costume and since I was driving a Red Camaro, Z28 it was an easy stretch to convince the children I was Santa’s helper who used a red car to drive Santa around. By now, word had spread and more people asked us to make stops at their homes.  Some left gifts in the front yard for Santa to deliver to their children.  Each year we visited more children and had more fun.  We had a great time. One year in the middle of an apple orchard, we ran out of gas. Santa walked to the owner’s house to see if he could rescue us. The farmer said he didn’t have any gas on the farm but he couldn’t leave Santa stranded on Christmas Eve so he drove him to town. I waited in the Red Santa Mobile. There weren’t many gas stations open on Christmas Eve and it took a long time but they finally returned with a full jerry can. We offered to pay for his trouble but the farmer refused to take money from Santa.

The best experience happened one year when we arrived at the wrong house.  We didn’t realize our mistake until it was too late.  Santa rang the doorbell and immediately we heard little feet running to the door.  Prepared for two little boys who belonged to a familiar family, we were both shocked when the door opened to reveal three clamouring children.  We didn’t have a clue who they were. One look sent them into unexplainable excitement.  Instantly they all started yelling and jumping up and down.  Their exuberance made it obvious we were beyond the point of no return.  There was no choice but to follow through with plan “B”.

As we waited for her appearance we glanced around her humble home.  In one corner there stood a Charlie Brown Christmas tree with scant decorations.  The living room furniture consisted of lawn chairs and a few other mismatched pieces.  There were no presents under the tree.  The look on her face was not difficult to read.  Who are these people?  Should she go ahead and let her children think this really is Santa?  Should she trust us?

Santa was a quick thinker.  He announced, “Tell me your names.”  Then after their response, “Now that we know we have the right house, Mrs. Claus, will you go to your Red Santa Mobile and get a little something for each of these beautiful children?”

“Good idea, Santa.” I said in my best Mrs. Santa voice and I hurried to the car to pick out three small gifts, threw them into a separate bag and returned to Santa and the three wide eyed children.

“Did you find the right ones?”  Santa asked upon my return.

“Do you think if I gave you these now, you could go to bed and to sleep quickly, so I can come back later?”

“Yes, Santa”, they all chanted in unison.

The expression in their mother’s face now showed gratitude but confusion was still apparent.

Who could this be??

As we drove away all three were at the window, waving and still jumping up and down.  We continued playing Santa until our grandchildren started to arrive.  We treasure the memories we made while playing Santa but none were more rewarding than the memories made when Santa visited those three children who to this date remain unidentified.