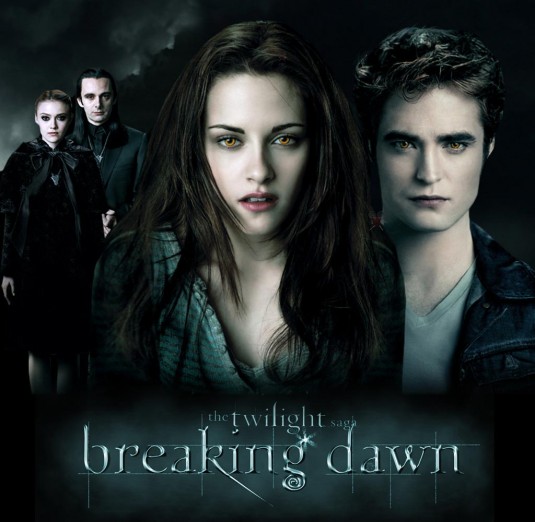 The newest movie in the Twilight series has so much merit, it’s a shame it’s about vampires and werewolves.  How many times have you seen a fairy tale begin with the wedding?  Usually the wedding is the end of the story, leading little girls for generations to believe that life is all about finding your handsome prince, and once you do, you’ll live happily ever after.

Thoroughly refreshing is the idea that a love affair begins with the wedding and launches you into adventures ahead.  Bella doesn’t walk down the aisle, smug and satisfied that she’s finally won her prize.  She walks down the aisle apprehensive and reticent, recognizing that she is entering, not concluding, a great adventure.  Even a wry joke about the first year of marriage being the hardest tributes the idea that life doesn’t end at the alter.

Thoroughly refreshing is the presentation of a virgin bride.  So many romance movies in this era allow lovers to jump into bed, without a second’s forethought, no pomp and ceremony, no acknowledgement that sex is a big deal, deserving of a celebration.  In Breaking Dawn the first sexual experience  doesn’t occur in the back of a Plymouth on the spur of the moment, but after a grandiloquent wedding, and a luxurious honeymoon.  The bride is full of trepidation before her first sexual encounter, giving it the honor that something so important deserves.

Thoroughly refreshing is the idea that a man might choose to exercise control over his sexual appetites after a marriage.  Twilight fans were already delighted to discover a man gallant enough to wait until marriage to indulge in sexual relations.  Now we discover this man is gallant enough to restrain himself even after marriage.  True to his nature, Edward refuses to do anything that might in any way hurt Bella, so when he accidentally bruises her arms during lovemaking, he won’t allow himself to come near her.   It’s enough to make you swoon.

The happy family references in Breaking Dawn were a delight, as well.  Edward gallantly stepping forward to announce, “I’m going to defend my family.”  Jacob reluctantly acknowledging that the Cullens “truly are a family, as close as my own.”

Jacob’s ability to stand up to his peers and break away from their pack is an noteworthy accomplishment for an adolescent, and gives value to Breaking Dawn.

These moral messages, however, are probably not the secret to the success of Breaking Dawn.  It’s popularity stems from the fact that teenage girls’ ultimate fantasies are realized in this movie:  the wedding of the century, divorced parents who actually get along when they are forced to come together, a daddy who cares about you so much he’ll jump on an airplane in an instant to be by your side, marrying a man who loves you so much he refuses to live without you, sharing the “greatest night of his existence” with that man.

Even the fantasy that you can make everybody happy is realized in Breaking Dawn.  If a young woman has ever been torn between two men she will relate to Bella’s anguish when she causes Jacob such penetrating grief.  She wants more than anything to make both Jacob and Edward happy, and probably wished more than once that she could clone herself.  Well, Meyer has come up with an idea almost as tidy:  have a baby for the man she didn’t choose that he would love more than he loved her.

Most fun were the many comic moments inserted into the film….  It would have been so heavy, so serious, so overwhelming without the element of comedy.  The toasts at the wedding were a delightful improvement on the book.  We laugh out loud when the guests stare up at a multi-tiered wedding cake and remark, “I thought it’d be bigger” and when Edward quips, “What’s a wedding without family drama?”

You also have to appreciate the irony in this series.  Jacob, who is so hateful of Edward ends up “imprinting” on the daughter of his mortal enemy.  Even worse, he imprints on a vampire, the species he most despises.  I wonder if the author is trying to say something about prejudice?

Six women I interviewed had various accolades to offer this movie, “It was the best one yet,”  “The werewolves were less fake than in the other movies,” “The actors have all been taking acting lessons, it’s obvious…”  But of all the diverse opinions purported by my serendipitous panel, they overwhelming agreed on one fact.  I asked them if they would bring their teenage daughters to this movie, and every one of them responded in unison, emphatically, “NOOO!”

Notwithstanding all the merits I found in Breaking Dawn, I can understand why none of the adult women in attendance would bring their daughters.  The love scenes were extremely arousing.  You never saw cleavage, but you saw lots and lots of skin, and even more passionate kissing and caressing.  As much as you want your daughter to know that marital sex is wonderful, you certainly don’t want her watching it in public, on a screen that is 60 feet high and 85 feet wide.

Equally disturbing was the laborious account of Bella’s pregnancy.  Those scenes belonged in a horror film, not a drama.  The ghoulish sight of her belly twice the size of a normal human, covered with bruises from the baby kicking from the inside, an account of her broken ribs, and the sound of her other bones breaking as the baby grows were enough to horrify a grown adult.  Even though Bella is carrying a vampire, and not a normal baby, a young girl who happened to see the movie might seriously fear ever having a child of her own.

It’s just too bad, with all the positive messages Meyer’s works reveal, they have to be set in a world of violence, bloodshed and macabre births.  It’s a shame we can’t learn the virtuous lessons she teaches from a Dalmation or a cat, a lion, a frog or a Clownfish.  Then we could proudly bring our daughters.

Editor’s Note:  The women I have talked to who have seen this movie agree that the love scenes were embarrassing and carried on too long.  They also added the word “cheesy.”  I’ll pass on this movie.  Maurine Proctor