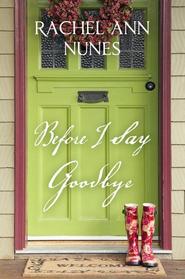 Rachel Nunes has taken a premise every parent has nightmares about and numerous writers and poets have turned into a sentimental sob fest.  Only, Nunes’s version is neither overly sentimental nor cheesy.  I’m not saying most readers won’t shed a tear over Before I Say Goodbye , but there is something honest and real about the emotion this story evokes.

Rikki and Dante were best friends as children.  Because of her abusive father and his negligent father, they had desperately needed each other.  As teenagers they planned to marry, then Dante got a mission call and his father, who generally paid him no attention, urged him to go. Rikki considered Dante’s acceptance of the call abandonment of her, leading to her taking off to make a life of her own, a life that included two marriages and divorces, two children by boyfriends who didn’t stay around long enough to know their children, and a casual lifestyle until she learns she has an inoperable brain tumor and little time left to make plans for her children’s future.

After twenty years, Rikii with two children in tow, arrives back in her old hometown in Utah.  They move into the long-neglected home that had been her father’s.  The children, seven-year-old James, and thirteen-going-on-thirty Kyle are not happy about the move and certainly not happy about being dragged to church when they’ve never attended church before in their lives. James does all right; he even finds himself befriended by the bishop’s daughter.  Kyle in her mini mini-skirt, tank top, thick makeup, and defensive attitude doesn’t fare as well.  The biggest shock is the bishop’s when he sees Rikki’s family enter the chapel.

Dante returned from his mission, met Becca, married her in the temple, and together they have four children.  He’s also the bishop of the ward. Seeing his old friend stirs up memories, both good and bad.  It doesn’t take long for Becca to learn Rikki is her husband’s old fiance, leaving her torn between the woman’s obvious need for help and jealousy.  Rikki’s daughter isn’t the kind of girl she wants her daughter to choose for a friend and Rikki isn’t the kind of person she has anything in common with, yet circumstances, some contrived by Rikki) keep throwing the two families together.

The situation stirs up a mixed bag of emotions.  Dante loves his wife and has no romantic interest in Rikki, but she was his best and only friend for so long.  He grew up protecting her and providing a refuge for her when she fled from her father’s abuse.  Now he’s her Bishop.  He takes his bishop responsibilities very seriously and he has a responsibility toward her.

Becca is torn between her fear that Rikki means to renew her old relationship with Dante and her concern for James and Kyle who need help and understanding.  She suspects Rikki has an ulterior motive for coming home, but she can’t turn her back on the family.  Her commitment to the Gospel and firm belief in service are as strong as her husband’s.

Rikki does have an ulterior motive for returning to her old home, but it isn’t what Dante and Becca fear.

Kyle has her own problems.  She worries about her mother, she wants to fit in with the other kids at school, she has a crush on the bishop’s son who is too old for her, and she wants to dance.  She is extremely talented and willing to do anything to get the money to pay for dance lessons.  Unfortunately there aren’t many legal means for a thirteen-year-old to earn the kind of money needed for the advanced training she is qualified for and wants with all her heart.

Nunes has a rare talent for creating believable characters and she excels at having them deal with hard challenges. Over and over she has proved capable of closing the link between readers and characters so that the reader feels what the character feels. The major characters in this book are real; their growth is believable and they mature and develop in a touching and enduring way.  I found the ward members a little idealized and their acceptance of Rikki a bit too easy; they’re more the way a ward should be rather than the way most wards are in reality with a wide range of commitment and follow through, acceptance and indifference. The characters rather than the plot carry the story, though the plot moves smoothly and holds the reader’s attention.

I’ve been reading and enjoying Nunes’s novels for many years, ever since she wrote Ariana which always remained my favorite, but with Before I Say Goodbye, I think I’ve found a new favorite.  Her many fans of both genders, teens, and adults will find a story worth their time in this one.

Rachel and her husband have seven children, ranging from a returned missionary to a brand new infant. She has many interests, but her family and writing top the list.  They make their home in Utah.