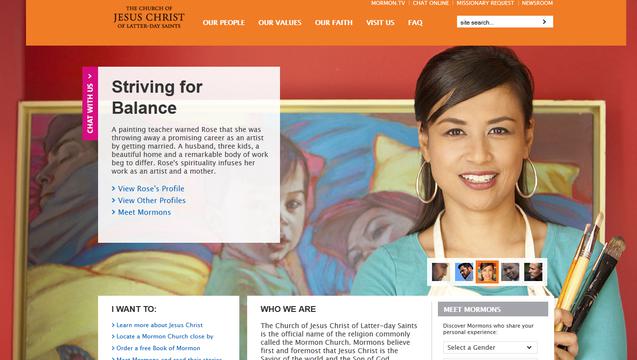 There is a widespread conversation taking place about The Church of Jesus Christ of Latter-day Saints and its members, and starting Monday, 3 October 2011, Mormons in 13 major cities in the United States and Australia will be taking part in that conversation in a more direct way.

The Church is continuing a national media campaign called “I’m a Mormon” that includes television spots, billboards, and ads on buses and on the Internet. The ads give a glimpse into the lives of Latter-day Saints from all over the world and refer people to the mormon.org website, where they can read the profiles of tens of thousands of Mormons, chat live with representatives who will answer questions about the faith and watch dozens of videos about members of the Church.

“Our missionaries are known for knocking on doors to share the gospel of Jesus Christ,” said Elder David F. Evans, executive director of the Church’s Missionary Department. “Mormon.org gives people the opportunity to knock on our door through the Internet and ask members questions about our faith.”

T “Many people are not familiar with our faith, and that can sometimes lead to misconceptions,” Elder Evans said. “The best way to understand Mormons is to meet them and get to know them personally. These ads are an invitation to do that.”

Leah Brown of Mesa, Arizona, is excited about the chance to share her faith with others.

“Sometimes people are hesitant to ask Mormons what we believe and why. But this ad campaign opens the door and invites questions,” Brown said. “This is a very natural opportunity to have a conversation with my friends of other faiths and hopefully help them better understand who we are.”

Originally launched in 2001, mormon.org has provided an inviting destination for people seeking online information about the Church. Over a million people visit the site each month. The “I’m a Mormon” media initiative has significantly increased the number of visitors to the site; in some cities where the ads have aired, the traffic is up as much as 300 percent.

While the Church continues to share its message through over 52,000 full-time missionaries, many individuals prefer to first seek information about the Church on the Internet before they speak with a missionary in person. Mormon.org plays a critical role in providing that content. Visitors to the site can chat with missionaries online; currently there are approximately 1,000 such chats happening every day.

On the site Latter-day Saints share personal stories and answer dozens of other, more specific, questions such as “Are Mormons Christian?” “What part does prayer play in your life?” “Why don’t Mormons drink coffee, tea, or alcohol?” and “What do Mormons believe about the Bible?”

There are currently 50,000 profiles on the site. Space is provided on the profiles for individuals to link to their personal Facebook and Twitter pages and their blogs. That feature will make it possible for individuals seeking to better understand the Church to connect directly with individual Mormons. Visitors can search based on age, gender, ethnicity and location to start a conversation with a member of the Church. Only English profiles will be available this year, but other languages will follow soon.

his latest campaign is a continuation of an undertaking that was launched in nine cities last year in an effort to help people understand the faith through both the ordinary and extraordinary aspects of the lives of Church members. The campaign is the result of research conducted by the Church over the past few years related to how well Americans know and understand the Church and its members.