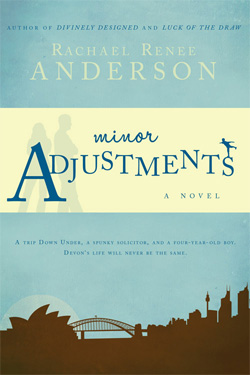 Once in awhile a love story comes along that touches a special spot in the hearts of readers.  Minor Adjustments by Rachel Renee Anderson is that kind of story.

Workaholic Devon Pierce is shocked to learn he has been named guardian of a four-year-old boy in far off Australia, following the death of the child’s mother.  He barely remembers the mother and their long ago connection.  He was beginning college and she was a thirteen-year-old exchange student with whom he had little contact while she stayed with his family.  He’s too conscientious too simply ignore the pushy solicitor who contacts him, demanding that he travel to Australia to deal with the matter personally. Putting his business in the hands of his company vice president, he makes the long flight to Sydney to inform Stella, the pushy solicitor, there is no way he, a man who works eighty hours a week, and lives in a Chicago high rise, can possibly care for a small child.

Not quite sure how it happens, Devon agrees to take the boy for two weeks.  He knows nothing about caring for a child, but his instincts are good.  Stella already loves little Ryan, her best friend’s child, and was hurt when the dying mother chose a man she hadn’t seen for more than a decade instead of her to raise her son. She spends as much time as possible with the boy, which means she’s also with Devon a great deal and though they form a competitive relationship, something stronger begins to build between them.  Predictably Devon changes his mind about Ryan when he discovers the alternative to keeping him is for him to become a ward of the state foster system.

Devon makes some huge business sacrifices in order to be with Ryan, including moving to Oregon where he can raise the child with an extended family nearby ,consisting of grandparents, aunts, uncles, and cousins. Both Devon and Ryan stay in almost daily contact with Stella by computer and Skype.  Then the unthinkable happens.  Ryan’s unsavory, biological father discovers he has a son and sues the court for custody.

The characters in this story are well developed and make believable growth through the difficulties they face and the obstacles surrounding their long distance relationship, their love of a child, and the realities of two very different careers.  Never sinking to the level of hyped sentimentality or excessive physical stimulation, the love story progresses along realistic lines complete with sacrifice, respect, and real need for each other. Ryan is a realistic four-year-old, cute and charming, but not immune to an occasional meltdown when he doesn’t get his way or is over-tired.

Though not an action drama, the plot is lively and develops in a satisfying way that charms and holds onto readers through all of the twists and turns of a pleasing fiction arc. The bland cover won’t grab attention, but the story between the covers is worth searching out.

Rachel has long had a soft spot for “down under” and when she finally got a chance to visit there, found it as lovely and exciting as she’d dreamed it would be.  This is  her third published novel and deserving of award winning attention.  She lives with her husband and children in Springville, Utah.