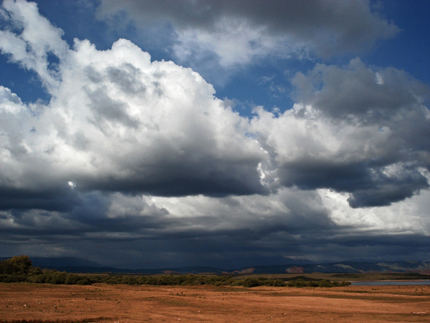 The central message of the Book of Mormon is, of course, Christ’s universal mission and that his atonement is accessible to all. Making that central point over and over again, the ancient prophets of the Americas recorded for us the great Cycle of Pride. They knew then what we should have learned by now in our day, that pride truly is the universal sin. And they painted for us a strikingly vivid picture of these cycles in the Book of Mormon and the terrible genocide that resulted. This is much more than merely fascinating history. In his comment, brother Nibley was referring to the cycle of pride as also being prophecy.

Initially, righteousness brought peace and prosperity to the ancient Nephites. Quickly, however, material comforts soon bred divisions within the people of the church. The poor among them became neglected. Thus diverted from their reliance on God and complacent in their sense of security, the Nephites saw their sophisticated society as superior and secure. Its collapse was unthinkable. When a generation arises who can see the same total annihilation ahead that the Nephites faced, that generation is the one for whom the Book of Mormon was written above all. Hence his warning.

Like most of us, I am not an economist or social scientist. But just in my 5-plus decades on earth I have witnessed great changes in our society. Some have been marvelous. Advances in health care, travel and communication have been particularly welcome. The internet has connected and revolutionized our society as much as electricity did. We have begun to expand the human presence into space. But there have been other changes, many of them also striking, but not in a good way.

My intention is not to be alarmist, or to produce a list of concerns that is either definitive or depressing. But as I see it, several processes are well underway that are destabilizing huge sections of our society.

No surprises here that one is the moral collapse at the ground-root level of our western society. What was unthinkable a few decades ago is increasingly considered normal. A coarseness has crept into our discourse, our entertainment and interaction with others. Rationalism has replaced moral values for many. We witness a constant stream exposing corruption, scams, waste, abuse and infidelity in high places that increasingly seems to be tolerated as a new “norm.”

We are not immune from these in our Latter-day Saint community. The pursuit of wealth in unethical ways has led individuals into immoral and criminal activity; it has infected some high-profile businesses owned and run by nominal Latter-day Saints. The loss of faith in government, religious and political intolerance and the rise of religious extremism and ultra-nationalism are other indicators of cracks in a crumbling society. Ultimately, materialism (trusting more in things and in ourselves than in God) has become the dominant religion of the developed world.

There is also a physical destabilization, primarily from the impact of weather events and earth changes. Earthquakes, tsunamis, floods, tornados, hurricanes and volcanoes remind us how quickly things can change. They can unleash a tsunami killing a quarter of a million people, such as that on Boxing Day 2004, or destroy towns and cities as we saw in places as diverse as Haiti, Japan and New Zealand, among others. Who can forget the spectacle of a major US city in total collapse for days after Hurricane Katrina? They can bring famine and starvation to whole regions such as what is unfolding right now in the Horn of Africa.

We cannot rule out “outside” forces either. Our electricity grids and communication networks are extremely vulnerable to solar flares, for example. Hackers can disrupt the flow of data that our technology relies on. Terrorism can paralyze and disrupt; fighting it can bleed the resources of countries and leave them weaker. While we have seen nothing to equal the two World Wars of the last century, in recent years we have seen genocide on a massive scale in Africa and in Europe and scores of wars still rage. Huge nuclear, chemical and biological arsenals remain ready for use among many nations.

For several years now the world has faced a new faces the very real prospect of a worldwide economic collapse. For failing something as basic as living within their means, a number of countries are staring at a very real abyss that could far exceed the Great Depression in the 1930’s. The world’s largest economy –  the US – is not alone in this situation; European countries such as Italy and Spain are also close to breaking point. Japan, the world’s second largest economy, took a tremendous economic hit earlier this year with the earthquakes and tsunami.

The Global Financial Crisis that most of us hoped was over, never went away. Some time was bought by bailouts and by increasing debt ceilings, but that is all. The impact on real lives from rising unemployment and the collapse of once-solid institutions has already been immense. In our increasingly interconnected and thus increasingly vulnerable world it could be just the tip of the iceberg.

As in the ancient world of the Nephites, our collective failure to remove the impact of poverty even among ourselves, much less among the poor around the world is a serious indictment of misplaced values. Should a worldwide economic collapse happen the undeveloped so-called Third World, the billion or more of our brothers and sisters who subsist on around $2 a day, will hardly notice any difference. They are already in survival mode. Perhaps they are part of  the meek whom the Lord said would inherit the earth.

A great division is taking place on several levels as we adjust and respond to these processes. Too many of us still live in comfortable bubbles of habit; too few of us remain unaware of the cultural assumptions that are so prevalent among us. These combine to lull us in the false sense of security that can insulate us from events. We can then be unaware of how much of the foundation has been weakened, if not totally eroded. Many of us are in denial about how quickly collapse can come in our sophisticated culture, how little it would take, for example, to remove food from our supermarkets and gas from the pumps. Everything can shut down very quickly. Civil unrest, as we have seen in recent days in London, can erupt with little provocation. As our world becomes increasingly destabilized and vulnerable it is time to prepare ourselves.

Perhaps we are the generation the Book of Mormon was written to warn, perhaps not. Of course, scripture tells us that ultimately a future glorious beyond our comprehension lies ahead for the good and righteous people of the earth, but a rough ride awaits us before that day.

If nothing else, though, it should be abundantly obvious that the storm clouds, heralding perhaps one of the Lord’s final sermons, are gathering.