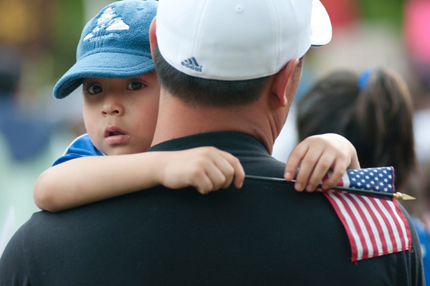 Ralph C. Hancock is a Professor of Political Science at BYU and President, John Adams Center for the Study of Faith, Philosophy and Public Affairs.

Recently Meridian ran an article by Grant Hardy, professor of history and religious studies at the University of North Carolina at Ashville called “What the Book of Mormon Says about Immigration.”  and invited carefully reasoned responses.  Dr. Hancock responds.

Grant Hardy has put us all in his debt with his penetrating and profoundly important reading of the Book of Mormon (Understanding the Book of Mormon).   And now, in these pages, he has provided a very welcome service by bringing his scriptural knowledge, sincere concern for our fellow human beings and careful reasoning to bear on the difficult question how to address the problem of millions of undocumented immigrants living and working in the United States.  A factor that we Latter-day Saints must weigh very heavily is that an important number of these illegals are our brothers and sisters in a special sense, that is, they are members who worship and serve beside us in our wards and branches.

Brother Hardy is right to point out that it would be both intellectually simplistic and ethically insensitive to imagine that the problem can be adequately addressed by recourse to the authority of civil law alone.  To be sure, the authority of legitimately established law is a bulwark of any civilization, but that authority must finally be assessed in a larger context.  Over recent decades, the American people have, consented, mostly implicitly but with varying degrees of awareness of the stakes, to the acceptance within our territory of large numbers of illegal immigrants who have performed various important economic functions.  (I leave out of account the small minority of plain criminals, whom everyone agrees ought to be excluded.)    For some time now their numbers have become legitimately alarming, particularly to citizens in states along our Mexican border.  But to respond to this crisis by insisting simply that “law is law” is indeed inadequate.  Our enforcement of laws, and our efforts to revise and adapt laws, must take account of the human reality that confronts us.

Thus far I agree with Brother Hardy.  I also agree with him that, where Latter-day Saints are concerned, such efforts ought to reflect the generosity of the LDS doctrine according to which, as he writes, “this is a land of liberty and refuge,” and indeed “the land of inheritance for the Lamanites.”  Like him I embrace the recent official statement of the Church counseling moderation and humanity regarding undocumented residents in our midst.  It is indeed curious and regrettable that many LDS citizens and lawmakers in Utah and elsewhere, and precisely those who on other questions would often be most eager to bolster their moral and political positions with church support, manage to ignore or somehow to discount the very clear direction the Brethren have given on this sensitive question.

“The brethren,” as Hardy observes, “have wisely taken a very moderate position.”  He would have done well to end the article there.  For he ventures too far when he, without argument, discounts the brethren’s “circumspection” and then goes on to maintain that a specific and perhaps extreme (depending I suppose on the meaning of “certain conditions and penalties”) policy of amnesty and full citizenship can be simply deduced from “the Gospel of Jesus Christ.”   He seems to assume that “distinctions” a national state makes between citizens and non-citizens may be simply disregarded as we see things from a Divine perspective that far transcends national divisions.

To be sure, “it is worth remembering that ‘all are alike unto God’.”  But translating this insight into feasible law and policy requires just the moderation and circumspection that Brother Hardy for some reason forswears in his concluding paragraph.  It is a mistake to imagine that gospel principles can translate so simply and directly into sound law and policy.  For example, we know through revelation that mankind would be better off if no one consumed alcohol or tobacco, but it does not follow from this that the gospel requires us to support laws simply outlawing these substances.  To what degree they might usefully be regulated and their usage partially suppressed under any particular government will depend upon local culture, circumstances, etc.    Similarly, we know that all human beings are sons and daughters of God; but to ignore national divisions in governing ourselves is simply not an option.

Brother Hardy rightly reminds us of the principle of moral agency, but he fails to consider that this principle has political and legal ramifications that bear on the immigration question.  The Lord has given us commandments that we are free to respect or to reject.  He has also left us human beings with the responsibility to organize ourselves in political communities – a responsibility, it should go without saying, that is often abused by the more powerful among us (including sometimes powerful majorities).   None of these human communities will be perfect, but each performs a necessary function in organizing our collective lives under some authority backed by physical force.  As James Madison said, if men were angels, such enforced authority would not be necessary.  But we are not, and it is.

Certain distinctions therefore necessarily come into play as we exercise our agency in trying to improve our lives and those of others.  Just as our most immediate responsibilities to our families and then to others within our circles of care (such as our wards, for example) must weigh more for us in practice than our universal humanitarian concerns (which of course must also have some weight), so we must recognize a necessary distinction between persons who are members of our self-governing national political community and those who are not.  Connecting our rights with our responsibilities requires that laws be made and equitably enforced over a determinate population and territory, and this is impossible without the defense of our borders.

Just as individuals must first be stewards of their own security and health in order to be able to serve others, so citizens cannot afford to consider the “stranger” or foreigner as strictly equal to fellow citizens where human law and policy are concerned.   Even without the all-too-clear example that we witnessed on September 11 ten years ago, it ought to be obvious that a government cannot maintain the rights and security of its citizens if it cannot maintain its territorial integrity.  Moreover, the fundamental values of a nation are put at risk when large numbers of immigrants are admitted who do not share those values.   Political communities (if they are not to be reduced to sheer despotism) are held together by at least a minimal consensus concerning basic principles and priorities.  Thus, in Brother Hardy’s own Book of Mormon example, it would have made no sense for the Nephites to welcome the Anti-Nephi-Lehies as fellow citizens if the latter had not first joined the church and forsaken the ways of war.   Clearly the analogy between hospitality to an individual stranger and a nation’s immigration policy has limited application.

Brother Hardy is right that mercy must not be forgotten in the enforcement, interpretation and revision of law.

But it is also true that compassion must be guided by wisdom.   No more than an individual can a nation afford to run faster than it has strength.   In the long run, we do neither ourselves nor those who desire to reside among us a favor by denying the necessary linkage between citizens’ rights and their responsibilities.   In immigration policy as in welfare policy, human rights and Christian compassion undermine themselves and cannot uphold true agency except by recognizing this linkage.

I deliberately leave open the question of just how fast we might be able to run in addressing the plight of undocumented residents among us in the United States.  For now I only submit that, by ignoring certain necessary limitations that define our human condition, limitations of which political borders are only the most visible evidence, Brother Hardy weakens his important case for mildness and even generosity in addressing the concerns of our undocumented brothers and sisters.    We must neither close our hearts to the “strangers” among us, nor close our minds to the legitimate and fundamental purpose of national borders.

If, along with Grant Hardy, we hope that “compassion might overcome fear” concerning the immigration issue, then, following the example he cites of the chief judge who consulted “the voice of the people” concerning the Anti-Nephi-Lehies, we must perhaps first allow the American people to assure themselves that they have a voice, that is, that their legitimate interest in governing themselves and therefore in controlling their national borders is taken seriously by their political, intellectual and religious leaders.