Our great nation is celebrating its birthday in a few days. Here is a collection of great historical books that help inform and bring to all a better appreciation for our America.

The first three books are geared more for teens and adults – but be warned:  they are so good that you’d better make time because you won’t want to stop reading them! The Miracle of Freedom: 7 Tipping Points that Saved the World, by Chris and Ted Stewart, is another inspiring book that recounts the “string that runs through history, a common thread that ties it all together.” But unlike their best selling “Seven Miracles That Saved America”, this book goes back in time to other great historical events that led up to the making of America and the freedoms that have prevailed since then. This thread becomes the amazing 7 points that changed the world when America developed its constitution and kept it intact during World War II. The exhausting research that the Stewarts obtained for the accuracy of the history is found in the notes at the back of each chapter. “The Roman Emperor Constantine’s conversion to Christianity” and “The discovery of the New World” are two of the tipping points.

The Original Argument: The Federalists’ Case for the Constitution, Adapted for the 21st Century, by Glenn Beck and Joshua Charles, along with Kevin Bale, Wynton Hall, David Harsanyi and Peter Schweizer, is a most insightful look into “The Federalist Papers” that were originally written as correspondence between Alexander Hamilton, James Madison and John Jay. These papers were written in the late 1780’s and laid the groundwork for our Constitutional law and rights. However, they are very difficult to understand and that’s where this book becomes extremely valuable!  Mr. Beck and Mr. Charles have outlined many of the papers and what the message is, the original quote, and the relevance of it today. This message is clear, easy to understand and employs a greater reverence and respect for what our Founding Fathers intended. 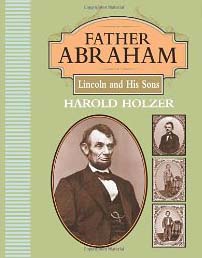 Father Abraham:  Lincoln and His Sons, by Harold Holzer, is an enriching account of Lincoln’s love of his family. You’ll read about Lincoln’s career in his law practice and in politics, but the real emphasis is his great love of his wife and 4 sons. There is tragedy in his life as his two youngest sons, Eddie and Willie, died as young children and Tad died at age 18. Only the oldest, Robert, survived. He went on to serve on Grant’s staff at the end of the Civil War and became a successful lawyer in Chicago.  Robert had one son whom he named after his father but he died as well, sadly leaving no descendants. But the book tells many heart-warming and humorous stories about Lincoln and his sons.

The Capital Kids series has three new books that are part of the Kennedy Center: Chasing George Washington, Teddy Roosevelt and the Treasure of Ursa Major and The Lives of White House Pets Unleashed.  All three books are adapted from plays by Ronald Kidd, and are illustrated by Ard Hoyt. This is an excellent series, geared for ages seven to ten, which brings history to life by using modern day kids and applying historical figures to their everyday lives. These books are great fun to read as well as informative! And pencil etchings are sprinkled throughout.

The Dear America series are always excellent with keeping kids, ages eight to twelve, engaged as well as informed. The newest editions include: Standing in the Light, Delaware Valley, Pennsylvania, 1763, Cannons at Dawn, Valley Forge, Pennsylvania, 1779, A Picture of Freedom, Belmont Plantation, Virginia, 1859, A Light in the Storm, Fenwick Island, Delaware, 1861, When Will This Cruel War Be Over?, Gordonsville, Virginia, 1864 and I Thought My Soul Would Rise and Fly, Mars Bluff, South Carolina, 1865.  These books are all written in a diary format but are very rich in story form. 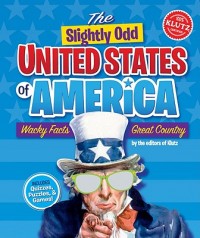 The Slightly Odd United States of America: Wacky Facts Great Country, by the editors of Klutz, is full of interesting facts about each state. The design is definitely kid-friendly as each page has one state and the artwork and layout is fun and easy to read. There are also games, puzzles and more to enjoy! This book is perfect for a summer trip for ages seven and up. 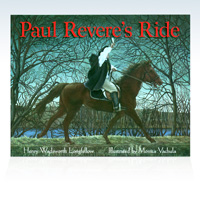 Paul Revere’s Ride, by Henry Wadsworth Longfellow, and illustrated by Monica Vachula, is a revitalization of the classic poem by the renowned poet in this beautifully painted picture book. Vachula has tirelessly researched this subject to enlighten and bring this poem to life. You’ll find her details intriguing and edifying. If Longfellow hadn’t written this poem, Paul Revere might have remained unknown.

All the Way to America: The Story of a Big Italian Family and a Little Shovel, by Dan Yaccarino, is a wonderful celebration of the immigrants that made up America. This picture book shows the personal history of the author and is rich in hues of greens and oranges throughout. The gauge used to show the passage of time is a shovel used differently by each generation. Check out the inside covers! 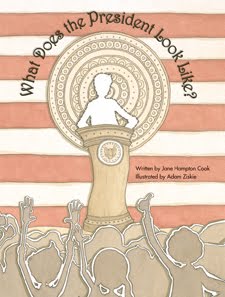 What Does the President Look Like?, by Jane Hampton Cook, and illustrated by Adam Ziskie, is a fascinating picture book that looks back in history and how Americans “knew” what their president looked like. Before there was the invention of photography they depended on portraitures and political cartoons from newspapers There are interesting facts, found on each president, highlighted as well.

Lady Liberty:  A Biography, by Doreen Rappaport, and illustrated by Matt Tavares, is a picture book that tells the story about the statue’s beginnings and its construction. Told entirely through voices of imagined people, the history is valid and strong as is the remarkable full page watercolor pictures. Check out the historical notes found at the back of the book.