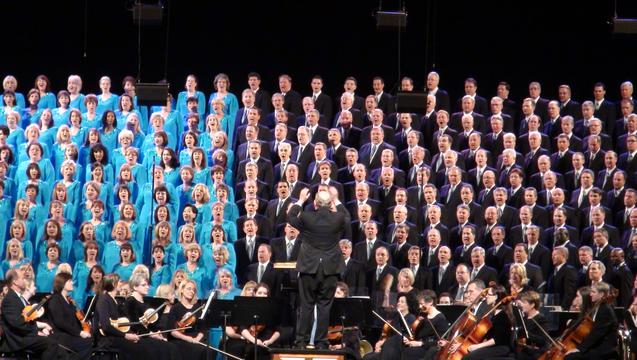 The Scope Arena in Norfolk, Virginia, is usually filled with the sounds of screaming hockey fans. But on Monday, 20 June 2011, the arena was filled with a different kind of cheering as the Mormon Tabernacle Choir kicked off its 2011 summer tour.

A packed house of over 7,000 people filled the arena to hear the world-famous group perform its first-ever concert in Norfolk. For many, it was also the first time to listen to the choir in person, and from the amount of applause, it seemed that everyone enjoyed the performance.

“We would not possibly have dreamed of missing this concert. It was just fabulous,” Mike Smith of Chesapeake, Virginia, said. “We are devoted fans.”

Smith and his wife, Debbie, are such big fans of the choir, in fact, that they even changed their cable carrier to ensure they could watch Music and the Spoken Word on BYU-TV. The Smiths said that although they don’t share the same faith as the Mormon choir, they have great respect and admiration for the group.

The Smiths were definitely not alone in their enthusiasm for “America’s Choir.” The wide-ranging program of classics, American folk songs and international numbers was well received, but the favorite in this military town seemed to be one of the choir’s signature songs, “Battle Hymn of the Republic.” Just before the song, announcer Lloyd Newell invited all of the current and past military in the audience to stand and be recognized for their sacrifices.

The audience got a surprise for the last number of the evening, when Virginia governor Robert McDonnell came out on stage to be the guest conductor for “This Land Is Your Land.” McDonnell said he remembers watching the choir on television as a young boy and said it was a “treat” to conduct the group.

Cathy Redfern of Williamsburg has seen the choir perform in Salt Lake City, but said the Norfolk performance was just as good.

“We were just in Salt Lake in April and I was amazed at how wonderful it sounded there and thought that because it was in the Conference Center it would be really great, but you know what? It was just as great here,” Redfern said. “I really, really enjoyed it. It was fabulous!”

“It was interesting to be in the audience because I had a hard time not singing, but I enjoyed it very much,” Green said.

The high-energy concert was even more impressive considering that the musicians left Salt Lake City before the sun was up Monday morning and flew to Norfolk, where they had time for just a brief rehearsal and dinner before performing.

During the afternoon sound check, some music educators from the Norfolk area were able to watch the choir getting ready and talk to conductor Mack Wilberg.

Violin teacher Janet Slavett of Williamsburg said she admires people who can handle both jet lag and acoustically difficult locations.

“It is very inspiring to see such professionalism,” she said. “This group works so well together, and it was great just to sit down and watch them work.”

On Tuesday, 21 June, the choir will sing a special number at Colonial Williamsburg, then head to Washington, D.C., for a concert at Wolftrap on 22 June.