I Love Being a Dad 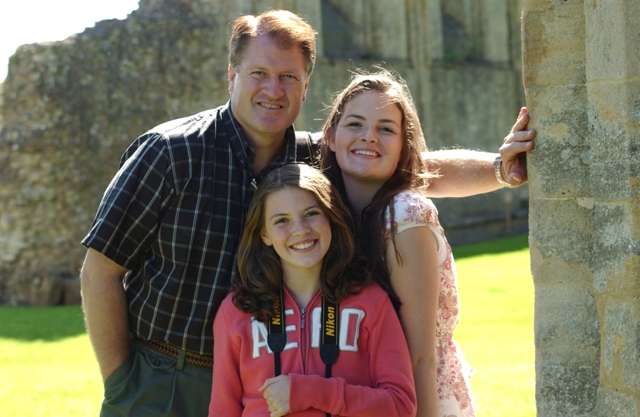 Scot Facer Proctor with two of his six daughters, Michaela and Mariah (circa 2007)

I have noticed over the years that we usually have women get up on Father’s Day and praise and extol the virtues of their husbands and fathers.  I think this is good, and I love to sit back and listen, but I feel like raising my voice from the congregation of the listeners and tell how I feel about being a Dad.

I have always loved being a Dad.  I was just meant to have this calling.  Truly, next to being a husband, it is my favorite role.  I was designed to be a Dad.  I’m not saying that all my children agree with me on this.

I am extremely protective of my family.  It just wells up in me through every fiber of my being.  I am the lightest sleeper, not because I am not exhausted, but because I listen for any noise, through the night, that might be the harbinger of danger for my family.  I can’t tell you how many hundreds of times I have been quietly going through the house between midnight and 4:00 AM, just checking a sound I heard.  I’m not a scaredy-cat at all.  I am full of courage—especially when it comes to protecting my family.  This goes for camping trips as well.  Let me give you a perfect example.

Maurine and I were once on a camping trip near the Flaming Gorge Dam in Utah. We brought two of our boys with us and we slept out under the stars with them between us.  They were quite young, perhaps four and six.  I was sleeping towards the outside of the wilderness area of the camp; the others were on the inside (that’s what Dads do, right?).

We settled in for the night and within a short time, all around me were fast asleep.  With my EEATS (ever-alert auditory tracking system), I began to hear a noise of an approaching danger.  It was clearly some kind of animal.  It was a star-lit night with no moon, so I could not discern what it was, because it was yet a far off.  There were various shapes in the proximate area of the sound, which formed in my mind as everything from a mountain lion to a bear to a deer or a moose.  I heard a few sticks crack in two.  It was definitely a large animal and presented a clear-and-present danger.  I decided to lie still (yes, I admit, my heart was pounding) and see if this animal would go on its way without bothering us or getting close to any member of my family.  I didn’t have a stick, a rock, a knife or a gun handy—just my fast-waning courage.

Should I wake Maurine to enjoin her support in planning for the onslaught of this monster?  No, her sleep is always sweet to her; I could not bear to wake her.  Should I get one of the others in the camp to be ready?  No, I can handle this myself.  I’m a Dad.

Slowly but surely the animal lumbered closer and closer to our sleeping bags.  It was certainly not concerned about the noises it made, nor was it concerned that there was a dense-pack of humans close at hand. I thought if it were a bear I should play dead—I had received standard bear training in my life.  I thought if it were a lion I might have a chance to spook it by a loud noise and fast movement all in one swoop.  I had ruled out a deer and wasn’t too excited about dealing with a moose.  My mind was playing with me now and I was creating scenarios at the rate of eight-a-minute.  Oh yes, I did say a prayer or two that I would be able to handle this situation and that my family would be protected.

The animal drew closer.  I decided to take the noise-and-movement approach.  I am an imitator of sounds so I chose a combination of a bear, dog, cat and elephant (with the trumpeting and spitting) together with the swiftness of the strike of a king cobra.  This menacing animal had now crossed the line.  It was too close to my family.  I was ready to strike.

With one lightning movement I flipped my whole body around from inside my sleeping bag and made a 180-decibel sound, positioning my arms in a menacing way as well to add to my size and stature to scare the living tar out of this intruder.  There before my eyes, only one foot from my face was the animal, clearly in black and white—a large skunk!  I scared him and he jumped up in the air about a foot or two, then landed and in a lightning fast movement pivoted 180 degrees with his ‘behind’ aimed with laser-accuracy at my face.  I immediately sputtered out, “No, no, no, no, no, no, no, please, please, please, please, please, please!”  This was danger indeed, categorically larger than I had imagined!  He accepted my pleadings, he did not squirt me, and my family was safe.

I love being strong for my family, physically strong.  I’ve always tried to keep in great shape, especially retaining strength in my arms.  Mariah refers to my biceps when I flex as “baseball under the skin.”  That pleases me.

Once we had taken nine or ten of our little ones (our much younger family then) on a hike to Donut Falls up Big Cottonwood Canyon in Utah.  We had pretty much tuckered everyone out and there came a place on the hike where we had to cross the icy stream.  The run off was fairly high at that point, and I wasn’t particularly excited about these kids (even the older ones) crossing the stream alone.

One by one from youngest to oldest I picked them up (ala Sweetwater River on a small scale) and carried them on top of my shoulders across the raging stream.  Maurine and little Rachel started humming loudly the Raiders of the Lost Ark music, you know, whenever Indiana Jones is getting through a tight scene or rescuing someone, you know that theme, “dah dah da daaaaaa, dah dah daaaa, dah dah daaaa daaaaa, dah dah daaaa daaaa daaaaa…”  Of course, this increased my strength ten fold and before long the whole family was across the stream, even though my feet and ankles were numb.  It was worth it.  Hey, I’m a Dad.

I used to play a game with the oldest girls when they were in high school.  If they needed lunch money for the week, in cash, I would let them have it if they could catch the ten-dollar or twenty-dollar bill when I dropped it between their fingers.  They could hold their thumb and index finger just one inch apart, I would hold the bill just above their hand and then I would drop the bill.  They never could catch it the first time, and usually not the second or third time either.

What they didn’t realize as they so intently wanted to grasp onto that bill, is that right before I would let go I would always distract them with something:  my voice, a sound, a question, a look away, something that would divert their attention for a split second, then I could drop the bill and it would slip through their fingers.

I have to say that finances are quite a big part of being a Dad.  And in financial matters I am supposed to be a small-business owner, a corporate executive, a team manager, an entrepreneur, a banker (especially a banker), a teller machine (okay, ESPECIALLY a teller machine), a farmer, a janitor, a mechanic, a psychologist, a doctor, a lawyer, a used car salesman, a carpenter, a repairman, a counselor, a teacher, a financial analyst, an investment consultant, a Realtor, a multi-faceted strategist, a warrior and a peacemaker and OH, so much more.  But, then…I’m a Dad.  And I truly love it.

Dads are supposed to be strong in any challenge, in any crisis, in any situation.  I certainly try to do my best.  Dads are supposed to be tough and rough and ready.  I am. Dads are not generally stereotyped as emotional or tender.  Here I go south.  I have always been tender.  My heart is just that way and with each new addition to our family over the years, I just became more and more tender.  I have bawled at the flight of each child from the nest, I mean out and out bawled and wailed.  It never got easier; in fact, it has gotten worse and worse.  The MTC was horrible.  Off to college has been a killer.  Marriage is, well, okay.  I cry, but then I am getting another daughter or another son.  When our children have had serious illnesses or accidents I have felt the weight of that pain.  I have used the priesthood on hundreds of occasions to bless, comfort, lift, inspire, strengthen, counsel and heal.

We had a daughter once who had veered from the course we would have chosen and was far from the Church.  Maurine and I were so sad about this.  It became the burden of our parenting.  We prayed night and day for this precious soul, all, it seemed to no avail.  Then one night about eight months into this ordeal, this daughter came to our room in the middle of the night with a horrible, terrible dream.  She said, “Dad, I need a blessing.  Can you give me a blessing right now?”  I said, “Of course, Darling.”

I excused myself for a moment to go “to the bathroom” and left our daughter there with Maurine.  I turned on the water in the sink, and then I waited as long as I could, then “fake-flushed the toilet” as I was really just kneeling down pleading with the Lord to give me the words to say to this wandering child.  In my mind I could see this was the perfect opportunity to give her some real fatherly counsel, to really set her course; to really put her back on the strait and narrow way.  I poured out my concentrated prayer, then returned to the bedroom ready to speak.

As I placed my hands upon her head, however, and spoke her name, I felt an overwhelming sense that the real Father just took over, and I was to be just the voice, He would give His mind on the matter and He would give all the words.  I listened as He poured out His love upon her.  He told her what a precious daughter she was, and how dearly she was loved.  He told Her how much He trusted her and that He was always near to her and could be counted on to help her.  He told Her that He had always loved her and that He would always be there for her.  It was one of the most powerful blessings I had ever “given.”

I was there to learn at the hands of the Tender One, the Great Father of Lights, the One who knows the thoughts and intents of our hearts.  I could hardly take it in that I had experienced what I had during that 2:30 AM blessing.  It was as if I felt from the heavens this understanding voice say to me, “I understand.  I’m a Dad.”