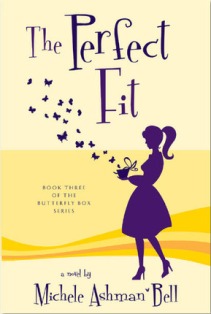 The Butterfly Girls get together again for their annual weekend reunion in The Perfect Fit by Michele Ashman Bell.  Along with catching up on each other’s lives, they learn new evidence has surfaced suggesting their friend Ava’s death fourteen years earlier was not an accident. Andi, the fitness guru, accepts an invitation to be on a reality show.  She arrives a day early and stays her first night at a small bed and breakfast.  When she goes for her morning run on the beach, she steps on a shell which becomes imbedded in her foot.  A kind man she assumes is a gardener, removes the shell and bandages her foot.  Unfortunately when she arrives on the set for the show, she learns the gardener is actually the bachelor the 24 female contestants are vying for and the rules of the show prohibit contact between the contestants and the bachelor prior to the show.  Since neither knew the other’s identity during their brief encounter, they keep quiet about it.  Unfortunately the paparazzi have a picture.

Andi is determined to have a good time and enjoy the beautiful island paradise.  She has no expectations of winning, but is surprised by the strong feelings that erupt between her and the bachelor.  Though she likes most of the contestants, she soon discovers some are determined to win at any cost and that calling the show a “reality” show is a misnomer.  When producers of the show learn about the chance encounter between Andi and Michael, they are determined she must go.  Learning one of her Butterfly friends was nearly killed in an accident and is in a coma and nearly losing her own life in a freak zip line accident add to her willingness to leave.  She doesn’t want to leave Michael because she feels there is something real and precious between them, but he’s not a member of the Church, and she is determined to never marry outside of the Church.

On returning home, Andi stays near Chloe until she is transferred to a convalescent center, then travels to New York to stay with Lauren while she meets with the publisher of the cookbook she is writing to go along with her fitness work and meets with the owner of a spa who is considering her as a spokesman for his Bahaman resort.  Strange things begin to happen, the girls receive threats, and having survived two nearly fatal accidents, Andi is convinced that whoever killed Ava and two cheerleaders who were her friends, is a threat to all of the Butterfly girls. She begins a wild ride to protect herself and at the same time take advantage of the professional opportunities that come her way.  Michael arrives in New York adding to her emotional stress as the action kicks up a notch.

Most readers become bored with descriptions of clothes and scenery, but Bell weaves the beautiful island scenery and the Manhattan clothing and theater districts into the story so skillfully that they lend to the story rather than becoming tedious.  The book begins with a prologue that is gripping and horrifying and which leaves the reader wondering where it fits in until almost the end of the book.  The first chapter of the story is a little slow and confusing for those who haven’t read the first two books in the Butterfly Box series, but it doesn’t take long to get into the story and enjoy both the faster action and the double treat of a love story and a mystery to solve. Bell’s many followers will be disappointed to learn this is the last book in the Butterfly Box series.

Bell stresses several points that are dear to her in this series. Because of her intimate connections with beauty pageants, New York,  and the world of fashion and entertainment, she promotes the wearing of apparel that is both modest and fashionable. She believes strongly in the power of friendships between women and the support friends give each other.  She is also involved with the organization Mothers Without Borders and works tirelessly to raise money to build a much-needed school for orphaned children, in Zambia, Africa.  At all of her book signings this month and next, she will be selling bookmarks for a $1.00 each with all of the money going toward the school.

Michele served an LDS mission starting in Germany and ending in San Jose, California and went to Dixie State College and Southern Utah University.  She and her  husband have four children, a daughter-in-law, and two granddaughters.  As frequently as possible she travels to New York to be with one daughter who is a top student at the American School of Ballet.  She became involved with Mothers Without Borders through another daughter who has done volunteer work in Africa. She has traveled extensively with her husband and family and recently became scuba certified.  She is also an aerobics instructor with a fondness for Zumba. She has written an excellent finale to the series.