Civil War Sesquicentennial – A Special Opportunity for Redeeming the Dead 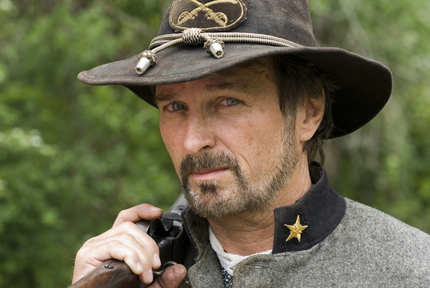 At 4:30 A.M. in the morning of April 12th, 1861, the first Confederate cannon opened fire on Fort Sumter in the harbor at Charleston, South Carolina.  The response of the federal officer in charge at the fort was to wait and see for a couple of hours; direct his men to have breakfast, and to avoid injury by staying inside the casements of the fort.  This attack was regarded at first as simply a political statement of an already excited populace over the actions and rhetoric of the past five months since the election of Republican Abraham Lincoln of Illinois as the new President of the United States.  No one had any idea that this was the beginning of the greatest military conflict in history on United States soil, the American Civil War.

In 2011 the USA begins a four year Sesquicentennial memorial of this historical event.  Between now and 2015 all facets of the Civil War will be examined, evaluated, and expounded upon.  Each battle will be reviewed; the politics and social commentary about American Freedom, Slavery and Emancipation, States Rights versus Federalism and the Genealogy of living Americans with personal ancestral ties to the events of this historical time period will be studied and discussed like it has never been before.

A Special Meaning for the LDS

For members of the Church of Jesus Christ of Latter-day Saints, The American Civil War Sesquicentennial (2011-2015) is a special opportunity for doing genealogy and redeeming the dead.  The records of the Civil War provide an avenue whereby Latter-day Saints can find new information in the vast collections associated with this historical event.  As we discover new generations of ancestors and their families, this new data can provide names, dates, locations, and relationships that can lead to family history and temple work.

Historically, the Civil War is also a reminder of the prophetic call of a prophet. On Christmas Day, 1832, Joseph Smith and his associates were concerned about troubling events unfolding in South Carolina.  As a result of the political issues of the day, South Carolina had seceded from the Union in November 1832, and was contemplating further action by the end of January 1833. While considering these events, the Prophet Joseph received a revelation from the Lord about South Carolina and future events, which was later published as Section 87 of the Doctrine and Covenants, stating:

Verily, thus saith the Lord concerning the wars that will shortly come to pass, beginning at the rebellion of South Carolina, which will eventually terminate in the death and misery of many souls;

And the time will come that war will be poured out upon all nations, beginning at this place.

And it shall come to pass, after many days, slaves shall rise up against their masters, who shall be marshaled and disciplined for war…” (D&C 87: 1-4)

Indeed, twenty nine years later in the spring of 1861, as described in this revelation, events starting in South Carolina precipitated the great conflict called America’s Civil War. The South divided from the North.  Great Britain and other nations were invited by both sides to align with their cause. By the war’s end over 600,000 men had lost their lives.  Remarkable, midway into the war, slaves rose up and demanded their rights to fight against their former masters, and the world was forever changed. A Prophet had spoken.

The Civil War is now a rallying cry for genealogists and historians throughout the United States.  Virtually anyone, who may have ancestors or family who served in the Civil War, has the opportunity to discover their tie to these people of history in the historical and genealogical records of the era.

This historical event marked the rise of modern bureaucratic record-keeping through governmental management of the war.  Instead of mere lists of soldiers and participants, detailed records of each person involved in the Civil War were kept by both the North and the South.  Descriptive records were filed; historical commentaries of the activities of each military unit were recorded.

Other record sources are available as well to the interested researcher.  Newspapers were abundant and reported the events through the eyes of the regiments representing each community from which soldiers hailed.  Prisoner of War Camps identified each soldier incarcerated in their holds.  Hospital records were preserved and collections of correspondence filled with letters to the leaders and government of both sides of the conflict were saved.  Following the War, pension applications were submitted to provide for the care and maintenance of injured and impoverished veterans of both Union and Confederate forces.

Records pertaining to the soldiers and other individuals of that time period exist in great abundance; many of which are now available in digitized form on the Internet.  Many of these records provide personal information about the participants in addition to detailed accounts of their families and ancestors.

The collections of America’s Civil War Records contain millions of names of soldiers and family members whose information can be discovered and used to document lineages and pedigrees on the Family Tree of Man.  Tens of thousands of families can uncover new generations of ancestors as they seek out their Civil War connections.

How to Use the Civil War to Redeem the Dead

Some LDS readers may wonder how this treasure trove of historical and genealogical records can be important to them, especially if their ancestors followed Brigham Young and the Church to Utah in the 1840’s, and therefore weren’t involved in the War.  What we have to remember is that the Saints who moved west were only a small number of the people with ties to the Church.  Many Latter-day Saints who migrated to Utah left family and loved ones in the East, whose families would later become involved in the hostilities when war broke out.  For others, thousands of members of the early LDS Church either chose not to follow the Saints across the plains or were not in a position to make the trek.  Families were divided, and they and their children became caught up in the political events surrounding the Civil War when the time came.

Plus, there were branches of the Church which remained in the East, or were established and grew during the period of 1846 to 1861 by the continuing missionary efforts of the Church.  In addition, during the many years following the Civil War, more and more people who had experienced the war first hand, converted to the gospel, and made their own migration west, leaving their families and ancestry behind.  Separated from the members of the Church in the Salt Lake Valley, and vice versa, many people suffered the loss of historical memory about family members and their ancestors.  Knowledge about the Civil War can unlock the door to discovering complete family records, leading to temple work.

For example, one early pioneer family in Nauvoo, Illinois, was that of William Atkins Gheen.

He and his wife Esther had joined the Church in Chester County, Pennsylvania in 1840.  They sold their home and farm, and moved their family to Nauvoo to be with the Saints in 1841. William was active in building the Nauvoo Temple, and in providing names of ancestors and family as baptisms for the dead became a new ordinance for the Saints.  By the time William passed away in 1845, he and Esther had eight children.  Two of his daughters were married to Heber C. Kimball, and when the Saints left Nauvoo in 1846 for the Salt Lake Valley, the Kimballs were among the leaders.  Esther and six of her eight children moved west on that trek.

Her eldest daughter Margaret had married, and she and her husband James Downing, along with Margaret’s eldest brother, Thomas Pierce Gheen chose to remain in Nauvoo.  Over the next fifteen years, Thomas became a follower of James Strang, and settled in Michigan.  His family in Utah lost contact with him, and twentieth century family group records wrote Thomas off as having died at birth.

Modern genealogy research discovered Thomas P. Gheen living in the home of his sister and brother –in-law, Margaret and James Downing, in the 1850 federal census of Nauvoo Illinois.  By 1860 he was listed as living in Michigan with his own growing family.  Because Thomas was the right age to participate in the military during the Civil War and wanting to know more about him and his family, a search of Union Army Service Records was made, and we located him as a private in the 9th Michigan Cavalry.  Later in the War, these records indicated that he was moved to the 8th Michigan Infantry.

A study of the service records revealed that midway into the war, Thomas Pierce Gheen was captured and imprisoned at the infamous Andersonville, Georgia, Confederate Military Prison.   In 1864, military reports identified Thomas Gheen as having died, and his family in Michigan was so informed.  Military pension records, following the end of the War in 1865, revealed that Thomas had survived; but following the surrender of the Confederate Army in the spring of 1865, he and hundreds of former inmates of the Andersonville Prison were marched to the Mississippi River where they boarded the Riverboat “Sultana” for the trip back to their homes in the North.  Just outside of Memphis, Tennessee, on the night of April 27, 1865, the boiler of the riverboat exploded, and the Sultana burned and sank.  1700 of the 2200 passengers died.  This time, Thomas Pierce Gheen, was indeed among the dead.

Because of the detailed records of his Civil War service, and wife’s pension, we learned the true account of this early LDS Saint.  We learned about two marriages, six children, and later made contact with their descendants who had lost the knowledge of the William and Esther Gheen family prior to the life of their grandfather, Thomas Pierce Gheen.  Family records were compiled, and temple ordinances were completed for this family of lost loved ones because of the Civil War records of this ancestor.

This is the first of a series of articles pertaining to the American Civil War, and how to discover ancestry through related historical event records.  In future articles we will discuss how to find your own Civil War ancestors and family members for family history and temple work.  We will discuss census records, military rolls, pension papers, regimental histories, how to identify a military unit on the historical field of battle, photographs, artifacts, planning a trip to where your family member served and much, much more.  We will also discuss records of slavery and emancipation, and learn how these records can uncover both black and white ancestry as well.  The Civil War is truly an amazing and exciting event in our nation’s history, and we can benefit from the records and history kept during that period. The Sesquicentennial over the next four years can be a grand time of discovery in the great mission of redeeming the dead as we seek out our ancestors and family who played a part in the great historical event, the American Civil War.