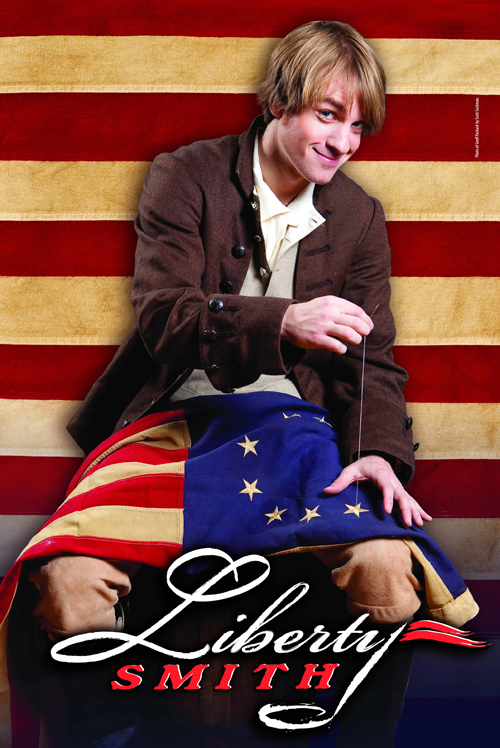 The bad news is that I have so few pals in the acting business.  The good news is that Meridian occasionally allows me to tell on them.

My pal Matt Anderson appears in the new musical “Liberty Smith” which is having its world premier at Ford’s Theatre in Washington, D.C.  The musical closes on May 21, so you don’t have many days to equivocate.  My advice is to go see it.  I saw it on a Friday night, and it seemed that everyone in the audience had a great time.  We certainly did.  Tickets will set you back $25 to $55, but keep in mind that a movie ticket can cost $13 or more.

“Liberty Smith” is a rollicking fantasy set in the American colonial era.  Matt Anderson plays Samuel Adams, and he also appears in an assortment of secondary roles, including a courtier at the court of Louis XVI and an angel with crystalline wings.  He has a wonderful comedic gift, and he has been inserted into a troupe of similarly gifted players.  Donna Migliaccio as Betsy Ross and Bobby Smith as Thomas Jefferson deserve special mention.  Smith reminds me of Louis Nye, one of Steve Allen’s sidekicks.  You have to be a certain age to remember those two, but they were gifted comedians and bright minds.

I met Matt’s parents at Church a couple of weeks ago.  They were in town to see their son and his show.  I suppose parents might take more pride in a son who is elected President of the United States, but raising a boy in Idaho who grows up to act on the stage of Ford’s Theatre is certainly an occasion for rejoicing.

This is the first time Matt has appeared at Ford’s Theatre.  He has spent years working his way through productions at local theaters.  He toured the nation in the Kennedy Center’s production of “Willy Wonka,” and he appeared in the long-, long- running whodunit “Shear Madness,” also at the Kennedy Center.  Having paid his dues, in several senses of the word, he has now been admitted to Actors’ Equity, the union for professional actors.

The Washington Post’s theater critic said that “Liberty Smith” was “very Disney.”  I think that was a sort of back-handed compliment.  “Disney” may not be synonymous with dramatic depth, but Walt’s progeny know how to put on a show.  One of “Liberty Smith’s” co-creators has done a good bit of musical work for Disney.

The eponymous Liberty Smith was, according to this telling, a childhood friend of George Washington’s who, in an effort to win the hand of the charming (and rich) Martha Dandridge, set off to win independence for the colonies.  Along the way, Smith meets Benjamin Franklin, Betsy Ross, Paul Revere, Thomas Jefferson, and others – and it is Smith who is responsible for many of the achievements that we now credit to his more famous contemporaries.  It’s a fun farce.

Martha Dandridge (the future Mrs. George Washington) is portrayed as a knucklehead, which I found aggravating, but others of the founding generation also get their share of historic revisionism.  (One of my favorites is Mrs. Ross’s original design for the American flag.)  Fortunately for the United States, young Liberty Smith was there to bring victory from the bumbling incompetence of such naifs as Jefferson and Franklin.

In the end, Liberty Smith wins the hand of the proto-feminist Emily Andrews (Betsy Ross’s niece), but he passes up the chance to be the first Vice President of the United States so that he and he wife could move to the Ohio Valley and raise a family.  He might of said, but didn’t, that his most important work would be within the four walls of his own home.

In an interview, one of the musical’s creators said, “The story strains credulity, and yet it just might have happened this way.”  To which the only appropriate response is, “No it couldn’t!”

Later in the same interview, another of the creators said, “What I think our show is saying is that in history there were other people whose names were not remembered, but they were just as important as the names in the history books. Everyone – every man, woman and child can make a difference: That’s the story of ‘Liberty Smith.’”  This is a bit of pie-eyed egalitarianism soaked in artistic license.  The average Joe and Jane are not “just as important” as George Washington, Thomas Jefferson, Abraham Lincoln, or Franklin Roosevelt, but it is true that the average Joe or Jane (that’s you and me) can make a difference in the world – and should.  This is why we have Family Home Evenings, to point out that we are all children of God but that only a tiny few get to be President.

I recommend “Liberty Smith.”  You’ll have a good time, and you’ll be reminded of some of the extraordinary achievements of our forebears.  I suppose it would be rated “PG,” but it is a much less offensive than many movies that get that rating.  There’s one prominent use of the word Eliza Doolittle used at Ascot.  There are legs in a can-can context.  Betsy Ross has a line that proves that even the most innocuous sentence from a most dignified document can be turned to a double entendre.

Hooray for Matt Anderson and all Latter-day Saints who are plugging away at the technically demanding and economically impossible craft of acting.  And, speaking of L.D.S. artists, I hope you have found your way to www.mormonartistsgroup.com

Mr. Oliphant lives in Virginia.  Like Liberty Smith, he is responsible for many of the great achievements of his age, but decided to live quietly with his family and allow others – presidents, generals, sages, scientists, the American G.I. – to take the credit and find their way into the history books.  When questioned, he admits that the story strains credulity but it might have happened.  To which the only appropriate response is, “No it couldn’t!”