Thousands of Mormon Volunteers Lend a Hand in California and Hawaii 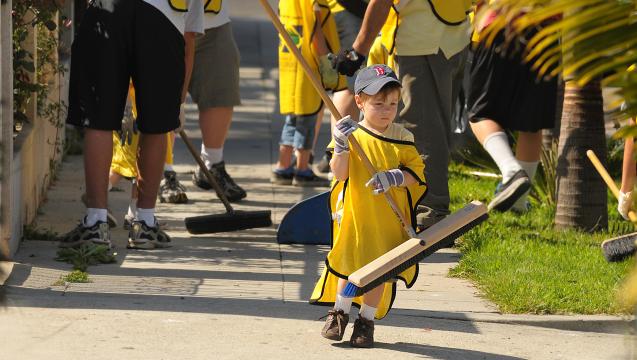 Over 65,000 members of The Church of Jesus Christ of Latter-day Saints joined with other community volunteers on Saturday, 30 April 2011, for the annual Mormon Helping Hands Day in California and Hawaii. In California, volunteers helped with 319 projects, saving the financially struggling state an estimated $4.5 million.

“This is a great opportunity to pay tribute to the fallen heroes of our country and serve those who have served us,” said James Morris, who brought his four children to help with the project.

Volunteer Judy Anderson agreed. “This is meaningful,” she said. “I was excited to come this morning and happy to be doing this for those who died for us. It’s a labor of love.”

Latter-day Saints in Palos Verdes partnered with a nonprofit organization called Clean San Pedro to sweep and clean the streets and sidewalks in the central area of the city, collecting over one ton of refuse and litter.

The head of Clean San Pedro, Steve Kleinjan, said, “We love to work with this church. They always have such a good turnout of volunteers.”

In Redlands, more than 2,000 volunteers from all faiths joined with community leaders to plant trees and shrubs and install river rock along a two-mile stretch of median along Redlands Boulevard. Another group worked at the Redlands Bowl, a popular outdoor auditorium, repairing backstage areas, cleaning up the grounds and painting gates and cabinets.

One of the most unusual projects happened at Seal Beach, where volunteers cut plastic shopping bags into strips and then crocheted them into bed-rolls that are given to the homeless in the area.

“It’s the right thing to do, to help out your community. And it’s fun to provide service together as a group!” said volunteer John Evelyn.

Volunteers in Inglewood did several projects at the local park and Boys & Girls Club.

“The landscaping work they performed over several weeks beautifies our property and brings a sense of pride to our organization,” said Les Jones, executive director of the Watts/Willowbrook Boys & Girls Club.

In the Woodland/Davis area, volunteers repainted a bike tunnel, rebuilt fences and worked in gardens. Davis Mayor Joe Krovoza praised the results of the project.

“All I can say is thank you to the Mormon Helping Hands project,” Krovoza said. “Davis is a city of volunteerism … but to see one group in one day come in with such force and generosity is humbling. It inspires us all to do more.”

Latter-day Saint Doreen Halverson, who helped with the Davis project with her husband and two of her children, said it is fun to be able to serve together as a family.

“We believe in making a difference by getting involved in community service,” said Halverson, “That is what we like about ‘Mormon Helping Hands’, being able to bring kids of any age to pitch in to make our community a better place to live.’

In Irvine, volunteers helped at the Orange County Great Park, planting 150 new citrus trees and putting a protective coating on 550 more. Fruit from these trees is given to those in need.

“We’re so grateful,” said Tom Larson, who oversees the park’s farm. “These in the future will produce a lot of fruit. Every tree is going to provide something for someone who needs something.”

For both the volunteers and those who were served, one of the most important parts of the day was the relationships that were built and strengthened.

Gloria Ervin, principal of Will Rogers Middle School in Carmichael, California, said, “The most critical part of this [Mormon Helping Hands project] is the bridge being developed between different organizations and businesses.”

“Serving like this is a simple way to give back to the local communities in which we live,” Inglewood Church leader Steven Adams said. “Friendships grow and develop as we work together with our friends and neighbors. A spirit of brotherhood and sisterhood prevails and continues on long after the work is done.”

The projects received media coverage in both states:

The Carlsbadian: Mormon Helping Hands on the Seawall

The Pleasanton Patch: Hundreds of Residents Offer a Helping Hand