Did the Nephites Remember Bountiful? 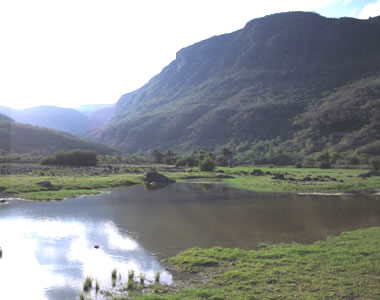 Once their ship arrived in the Americas, the focus of Lehi and Sariah’s group was, understandably, on building a new life in their Promised Land. Once there, references in the Book of Mormon looking back to their old life and their homeland are very few. However, we can expect that down through the generations, the impact of their dramatic journey from Jerusalem to Bountiful and their long sea voyage remained significant. There are, in fact, some interesting hints that memories of the Old World – and specifically Nephi’s Bountiful – may have survived among some of the people living in Central America.

This intriguing possibility seems to have been first noted in 1950 by a General Authority, Elder Milton R. Hunter of the First Council of the Seventy. He noted that the Mayan word Tula or Tulan meant “bountiful or abundance.” 1

While the word Tulan is actually a pre-Classic central Mexican (Nuahatl) term meaning “Place of [Cattail] Reeds,” its usage includes the concept of abundance. Over time the word was also associated with the creation legends of the early Mesoamerican peoples in which the first life, reeds, emerged from the primordial sea. It remains in use even today.

we came from the west, from the place of abundance, from the other side of the sea. 2

The original Spanish wording “Lugar de la Abundancia,” the place of abundance, is identical to that used in the current Spanish translation of the Book of Mormon when it refers to Nephi’s Bountiful in the Old World.

Significantly, arriving from the west, and therefore landing on the west coast of the New World is what the Book of Mormon implies in Alma 22:28. Other parts of the text also inform us that both the place of departure from the Old World and the arrival place in the New were called “Tulan”:

from the west we came to Tulan, from across the sea; and it was at Tulan where we arrived. 3

Tulan also appears in the Popol Vuh, regarded as the most authentic and important record of the ancient Maya to have survived the Spanish conquest. 5  This Quiche Maya writing, composed in the early sixteenth century, describes how the ancestors of the Maya were guided across the ocean to their new home by a peculiar instrument called the “Pizom-Gagal”. 6

A third Quiche Maya source, the Title of the Lords of Totonicapan, also mentions that their leader guided his people to their new home by means of something called the “Giron-Gagal.” 7  The obvious similarity to the name Pizom-Gagal and the way the functions of this instrument are described suggest that a memory of the Liahona may have been preserved long after Lehi’s day. These links strengthen the likelihood of a connection to the Lehite journey.

Intriguingly, the Totonicapan describes the location of the Old World departure place in some detail:

our ancestors had come from the other side of the sea, from Civan-Tulan at the confines of Babylonia. 8

These tribes came from the other part of the sea, from the East, from Pa-Tulan, Pa-Civan they came from where the sun rises, descendants of Israel, of the same language and the same customs they were sons of Abraham and Jacob 9

The fact that this text refers to the land of Babylonia being in the east may, of course, merely refer to the direction of the Near East homeland when viewed from the Americas, thus not contradicting other texts that state that their ancestors came from the west.

By mentioning “Babylonia,” the record narrows the geographical focus of the place of origin considerably. While the maximum extent of the Babylonian empire did not literally extend as far as the lower half of the Arabian Peninsula, its influence and impact in that era was considerable. The Babylonian capture of Jerusalem, warned of by Lehi, took place only about fourteen years after they left Jerusalem.

By linking their “Tulan” with Babylonia the Mayan historians ensured that, in a general sense, their middle-eastern origin was preserved. The claim that their ancestors were also literally of the House of Israel provides a further link to the Book of Mormon account. 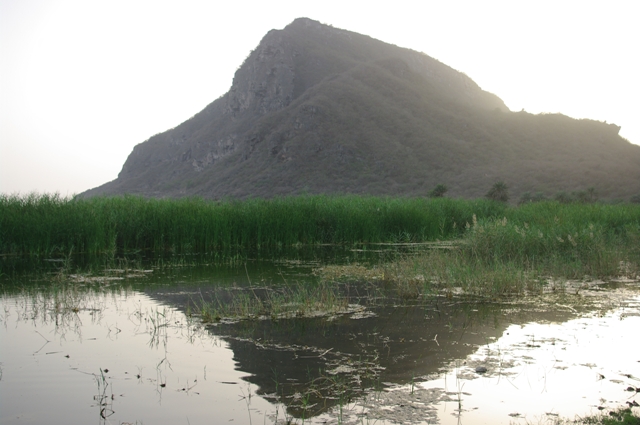 Although Kharfot’s inlet is now closed to the ocean, this image illustrates the main features referred to in the legends of the Maya.

The sum of these and other incidental references to the legendary place that spawned some of the Central-America civilizations is impressively specific. They assure us that their place of origin was middle-eastern and lay across the ocean. Above all, they emphasize that it was a ravine, a watery place of abundance and reeds. This description fits our best candidate for Nephi’s Bountiful, Khor Kharfot, perfectly. 10

Another glimpse of Lehi & Sariah’s Journey

A groundbreaking new TV documentary titled Lehi in Arabia is now being filmed on location in Israel, Jordan, Yemen and Oman. The film will document the places and also the efforts of LDS researchers to locate where Nephi’s account took place.

7.The Annals of the Cakchiqueles, 170. This was the first translation into English of the full text and is based on the 1834 Spanish translation by Father Dionisio Jose Chonay from   the original Quiche document. M. Wells Jakeman of BYU had earlier published extracts in English in 1945.

Aston, “Identifying Our Best Candidate for Nephi’s Bountiful” in Journal of the Book of Mormon and restoration Scripture 17/1&2 (Provo: Neal A.

Maxwell Institute for Religious Scholarship at BYU,  2008): 58-64. This article can be  read online  under the  author’s name or “publications.”