Exploring Nephi’s BountifulBehind the Scenes of an Expedition 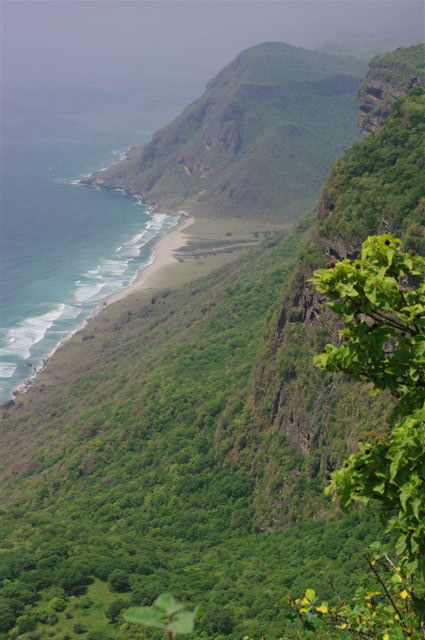 A number of people have expressed interest in the story behind my recent Book of Mormon articles, so I have assembled some images taken just over a year ago. This expedition was actually the largest team to go to the Bountiful site in Oman so far, nine people in all. Even after years of exploring (I have been going since 1986), each expedition peels back more layers to reveal more of the past. This particular visit was no exception.

What is the purpose of the continuing visits?

Years of exploration have identified only one small area that seems to match the unique, fertile place that Nephi called “Bountiful.” In order to fully understand the place, which remains almost unknown even within Oman, many scientific disciplines need to be involved. As most church members will never be able to see them for themselves, it is also important to document them properly. And it is vital that steps are taken to protect these pristine places against exploitation and degradation. A lot of work has been done ensuring that the Omani government, regional media and UNESCO are aware of the importance in preserving them.

Who goes on the expeditions?

In addition to archaeologists, geologists, historians, botanists and film crews, we always have several sets of helping hands along. These other people give invaluable assistance, allowing specialists to do their work. They also help facilitate day-to-day life at the camp. Usually everyone pays their own way; sometimes a sponsor makes it possible. BYU has also sent faculty members there at various times.

How do you get to the site?

Scot and Maurine Proctor will be the first to confirm that getting there is an adventure in itself! Whether you are coming from the States, Europe or Australia, it is a long way to reach Muscat, the capital of Oman. First-time visitors soon realize that they are in a friendly, clean, very safe country that welcomes Western visitors. English is widely spoken. From there it is a 90 minute domestic flight south to Salalah, the southern capital. We buy food and other supplies here. We then drive up into the mountains near the Yemen border for several hours to reach one of the small fishing villages at the coast. There are no roads to the site so the final stage is always exciting – riding a chartered fishing boat along the coast and arriving on the beach.

How long do you stay?

Teams generally stay between one and two weeks. Often there are other things that need doing before and after each visit to the site; we coordinate activities with local authorities, for example, and we have also been exploring sections of the two wadis that provide access from the desert interior to the coast.

At the site we are completely on our own. We have no facilities except what we bring with us. We camp in a variety of locations and cook our food, taking care to leave the place unspoiled. It is hot! The day begins early at first light and usually it is necessary to keep under cover for a couple of hours in the middle of the day. We use this time to rest, cook and catch up notes. Camera equipment requires special care to protect from the sun and sea spray.

At night it can get surprisingly cool and we need some warm clothing.

Local springs provide all our fresh-water needs which is a huge help. Firewood is abundant so it is easy to make a good fire. Sometimes we can buy a large fish or lobster from local fishermen and cook it in sea water. More often though we have pasta and other easily-prepared food. We always have contingency plans in case it becomes necessary to evacuate anyone who falls ill or has an accident; to date this has never been necessary.

With that background, enjoy these glimpses of what goes on during a recent expedition! 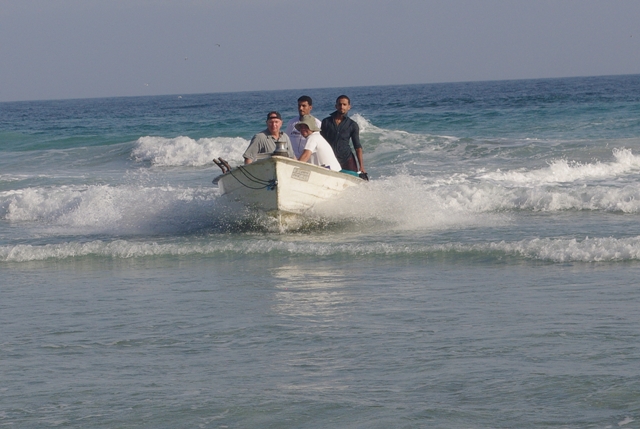 Here we are landing on the beach. With a large team we use two or more fishing boats manned by local fishermen. They have to time the final run onto the beach carefully between breaking surf. This day the waves were small but it is still a time to hold on tight. 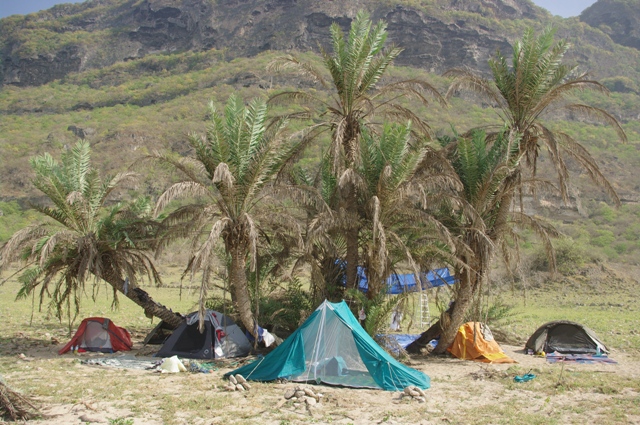 This is our camp with our tents set up around a small cluster of date palms near the beach. The trees provide some shelter from the sun, but this time the team was blessed to have two members who remembered their scouting days. They used a large tarpaulin to erect a sun shelter. This made life a lot easier for all of us. 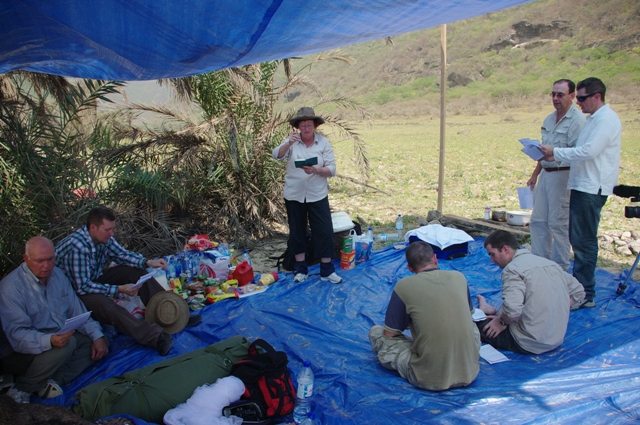 As General Conference convened in Salt Lake City we were able to hold the first Sacrament Meeting at the site. Brent Heaton, a bishop serving in Utah and Paul Hulme, a branch president serving in Queensland, Australia, jointly conducted the meeting after receiving permission from the branch president in Muscat. The sacrament was blessed, testimonies were given and minutes kept for return to the branch later. We all wondered whether Lehi led his family in worship somewhere here long ago. 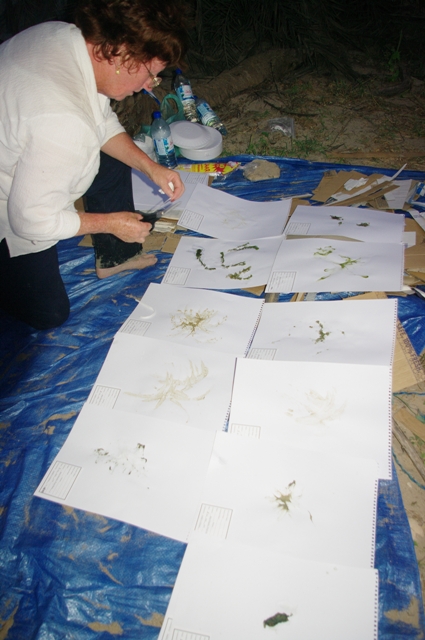 With a PhD from BYU, Judith Grimes was the team botanist, focusing on food and timber resources and algae. 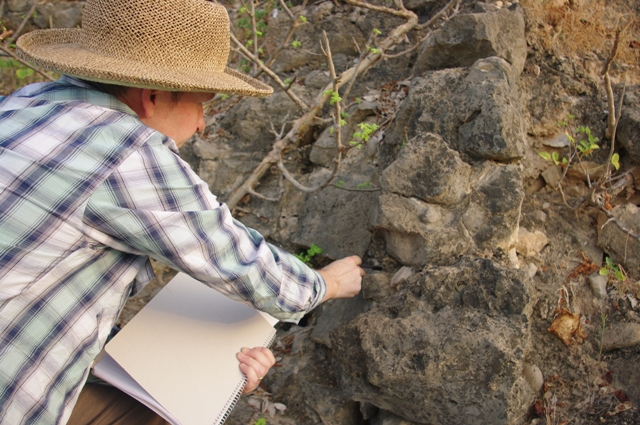 Neville Terlich, a professional archaeologist, examines one of the many ruins showing that people have lived here in times past. 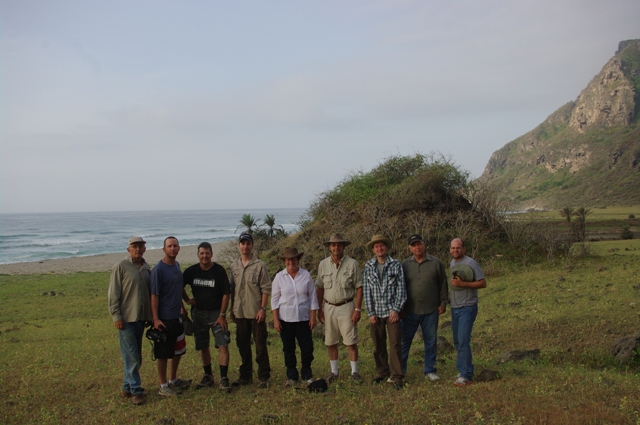 The entire team assembles before going to work.

* Image: As always, our encounters with local people are real highlights. These boys live in a village in the mountains behind the bay. Outsiders are rarely seen here. 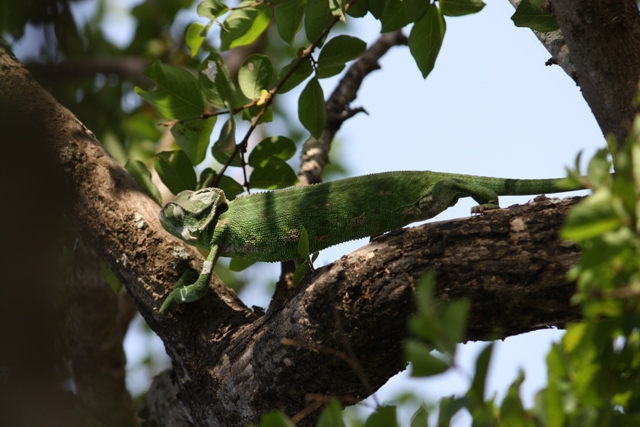 The flora and fauna here still holds surprises. The almost extinct Arabian Leopard still lives here; we have found its paw-prints often. Turtles nest on the beach. In the vegetation we encountered this large chameleon. 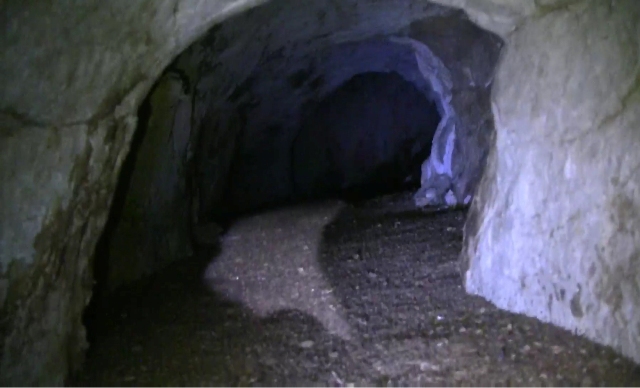 One of the interesting discoveries with this team was the discovery of a major cave system. This view is taken from video footage inside the cave. I won’t spoil the surprise here, but the cave had a very unexpected occupant. 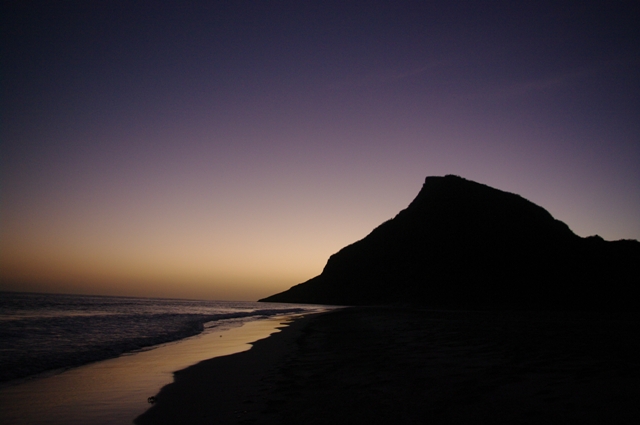 After sunset Venus and the stars become visible behind the large mount overlooking the bay.

Over the years I have been repeatedly impressed by the contributions of ordinary people when they have encountered the world of the ancients. I think, for example, of the cattle rancher from Texas on a Lehi’s Trail tour group; he immediately pointed out things about the ruins and animal trails that no-one had noticed before. It was a miner who first noticed iron deposits on a rock face that many others had seen and not recognized. I remember a retired geologist making the landscape come alive for us because he saw how the bay had formed.

A bird species never before reported in Arabia, the Malachite Kingfisher, was documented here for the first time by an amateur Ornithologist in a tour group.

Through work such as this, by many different Latter-day Saints, the past is slowly but surely emerging in these remote places. All of it contributes toward our appreciation of the places that Nephi describes so vividly in his account.

Warren Aston will be leading a tour to Oman and Nephi’s Bountiful which departs Oct. 19, 2011. Learn more at www.bountifultours.com