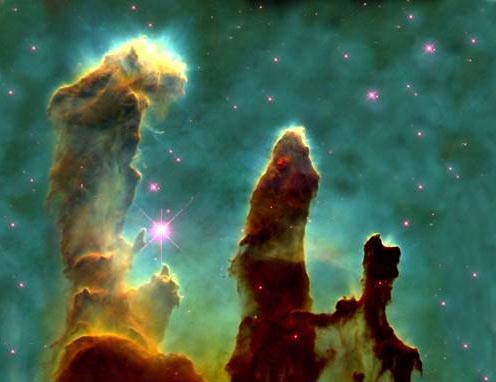 “An entire universe may be interwoven silently with our own.”

It is variously referred to as “dark matter,” “mirror matter” or “subtle matter.” The “dark” refers to the fact that it is invisible, but because it is real it is still always named matter. Its existence has been suspected since the 1930s, but now scientists may be at the brink of beginning to understand this mysterious part of our existence.

Scientists believe as much as 85% of our universe is made of it.

We live in truly exciting times. Knowledge in all fields is increasing so rapidly that it is difficult to keep abreast of developments in a single field, let alone many. This is, of course, how it should be in the latter days.

All around us we see the fulfillment of the Old Testament prediction that in the time of the end “knowledge would be increased.” (Daniel 12:4). Those who watch and monitor the changes and advances in knowledge from a spiritual perspective can see, I believe, the gradual but steady vindication of eternal Gospel truths.

One of the most fundamental principles of the Restoration is that everything is eternal. Furthermore, the prophet Joseph Smith taught the great truth that all natural things — humans, plants, animals and even the earth itself — had a dual creation. All things were organized first of spirit matter, which the prophet described as a “more fine or pure” state of matter,2 which is then clothed with the coarser, more dense matter that we are familiar with in this life.

Even without knowing all the details, it is a tremendous blessing to understand that all living things have an eternal identity. When a loved one dies it is comforting to know, for example, that the spirit of our world is right here and that they remain not far from us.

In a future day of resurrection the physical body will be reconstituted to join inseparably with its eternal spirit. Much the same will happen to our earth as it becomes the Celestial Kingdom. We gaze at the night sky and struggle to comprehend a God able to bring millions of worlds into existence from eternal elements and shepherd them through this great cycle.

Until now, mainstream science has dealt only with what can be measured and touched. As our knowledge has expanded, the limitations of this approach have become ever clearer. Increasingly, the frontiers of science are expanding to recognize new realities all around us.

At this stage it seems that dark matter and its companion, dark energy, are probably the primal, more fine “spirit” matter that the prophet Joseph spoke about, or at least some aspect of it. Only the terminology used hides its identity from us.

The implications of this discovery are vast and will take time to penetrate, a study now in its infancy in laboratories around the world. Dark matter seems to be composed of many different particles and forces that have complex interactions between themselves and with visible matter. On the macro level, astronomers believe that whole galaxies and clusters of galaxies — hundreds of millions of stars — are surrounded by a halo of this matter. While invisible to our current sensors it nevertheless influences the stars in visible ways.

One day we may see that understanding dark matter was one of the great steps forward in the history of science as, indeed, it should be if it is most of the stuff of existence. We should follow developments with interest. When the existence of this other matter is assimilated into its conceptual framework science will move onto a whole new level.

Science will not be alone in moving forward when that happens. With such an integral part of religion recognized, our increasingly materialistic culture will find a new reason to take concepts such as God, spirit and eternity more seriously. Along with other believers, Latter-day Saints will have a deeper, clearer appreciation of the magnificent universe in which we are placed. We too have much still to learn.

During a road trip to UT, I was talking with my wife about this very hypothesis the other day. It wasn't until we returned home to AZ that I began researching the possibility and found this article. I was excited to find another science-minded Latter-Day Saint who'd pondered the same amazing implications of dark matter. Thank you for fueling my fire to continue learning more, even if I am a couple years late to the party.

I found this entry by searching the same thought. I came to wonder if spirit matter was also dark matter since neither of them appear in directly interact with electromagnetic radiation but both (I'm guessing) have mass.Who knows? Maybe we're totally wrong. But I imagine many of the Saints have also considered this thought. One day, we will learn all the mysteries of our universe.