Married just eight months, Meg returns home from work to find her husband’s clothing and belongings gone with only a note on the table to say, “I’m sorry.”  She calls his cell phone and gets little more than another, “I’m sorry,” before he hangs up on her. 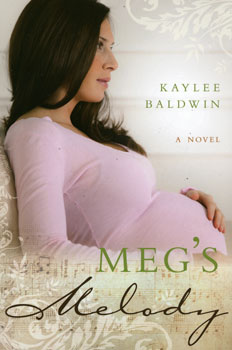 Meg’s Melody by Kaylee Baldwin begins with the breakup of Meg’s marriage and the plunge into deep feelings of inferiority and low self-esteem that had been building all her life, but intensified in a marriage that had further damaged her worth in her own eyes and separated her from the church and her personal values.  The sudden divorce minus explanations for why her husband left her, causes more damage.  The ultimate humiliation seems to be the realization she is pregnant.

Meg’s refusal to accept the abortion her husband offers to pay for through their attorneys is her first small step to recovering the person she once was.  Her strong, self-confident sister and her sister’s husband, attempt to help her, but only increase her sense of inferiority.  Her well-meaning mother also unsuccessfully attempts to help.  Their efforts to interest her in a man she had a crush on back in school pushes her into a dating situation she isn’t ready to handle.  Her lack of self-confidence makes it impossible for her to refuse to see him. And as her pregnancy grows obvious, she faces the prospect of becoming a single mom and the assumptions that go along with the role.

The only person who seems to understand her need for a time of healing peace and to build up her sense of worth is her doctor, who also turns out to be her Sunday School teacher when she gets up her courage to return to Church.  When she takes over care of his four-year-old daughter for a week because his sitter is faced with an out-of-state emergency, she grows closer to him and to his daughter.  The friendship feels safe to her because the recently widowed doctor isn’t ready for a relationship either.

None of the adjectives generally used to describe a romance novel seem to fit here.  Words like fun, charming, delightful, light, fail to describe Meg’s Melody. Yet it’s not somber, depressing, or heavy either.  The beginning is sad and will make most readers angry at first, but most will applaud each step Meg takes in her journey to discover who she is and move from a young woman, too eager to be accepted, to one who can stand on her own feet and refuse to be manipulated.  It’s a beautiful story of friendship that grows to something more. It’s a rewarding story of one person’s personal growth both through sincere effort on her part and through the music that touches her soul.

Baldwin shows an understanding of pacing both in the action and the plot arc.  Attention is given to character development and I was pleased that she didn’t take short cuts with Meg’s growth or the development of the romance.  Meg’s low self-esteem is handled well and not blamed totally on one traumatic event, but instead is shown to have been chipped at slowly for years and it only reaches crisis proportions when her husband abandons her. But make no mistake, Meg is not a limp dishrag character.  She faces her challenges with courage and gains strength as the novel progresses. Dialogue is handled well, too.  It is realistic, not overly sentimental, and fits the characters.  The cover on this book looks like one of those magazines a woman picks up in her obstetrician’s waiting room and I didn’t find it very appealing.  I wonder how many women with teenage daughters in the house would pick it up.  Readers who delve beyond the limited-interest cover, will find a love story worth reading.  I think older teens and adult women will be the primary readers of this novel even though portions are told from a male character’s point of view and the male POV is handled well.

Baldwin, an Arizona native, lives in the southern end of the state with her husband and three children.  She is a graduate of Arizona State University.