Read about the ranking in U.S. News & World Report 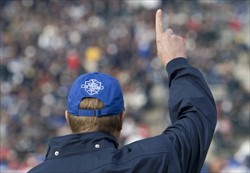 For the second year in a row, and the third time in the past four years, BYU has been named the most popular university in America by U.S. News & World Report.

The “most popular” rankings are based on yield, which measures the percentage of accepted students who go on to enroll. BYU topped the list with a 76.9 percent yield rate, followed closely by Harvard with 76.5 percent and Stanford with 69.8 percent.

Once again, BYU beat out Harvard and Stanford to claim the top spot. BYU tied with Harvard for the No. 1 spot three years ago before falling to No. 2 in 2009. U.S. News started doing the rankings in 2008.T

The U.S. News story pays special attention to BYU, mentioning that many applicants forgo applying to other schools because of their desire to attend BYU.

“Ever since I was a kid, I always wanted to go to BYU,” said Lindsay Petersen, a senior from Carmel, Indiana. “I knew admission was competitive, so I kept my goal in mind during high school and worked hard to get the grades that I needed. I always dreamed of being here.”

BYU was also recently listed as a Top 20 “Best Value” school by U.S. News, joining the likes of Yale, Harvard, Princeton, Stanford and MIT on the list of great schools at a great price.