The First Archaeological Support for the Book of Mormon

If you enjoy Meridian’s inspiring, educational and up-to-minute coverage, please donate to our voluntary subscription drive here.  You make all the difference on whether we can bring Meridian home to you.

When I served my mission in Australia in the early 70‘s, one of the standard jokes among the missionaries was that “one day” someone would find an inscription, “I, Nephi, was here” or something like that, left by Nephi himself. We relished the thought that something like this would be discovered, something that would virtually force the Gentile world to take the Book of Mormon seriously. Then we would have some serious baptizing to do as hordes of people joined the church.

Of course, even back then we knew that even if the gold plates themselves turned up, that would not constitute “proof;” for proof of the Book of Mormon comes only in one way – a spiritual witness from God. What we yearned for was to be taken seriously and for our message to be given a chance.

Some 40 years later, I’m sure that all our expectations have matured and become more realistic as we have learned how God works. The Lord could easily reveal himself in great majesty before the whole world, or cause angels to appear to people testifying that the Gospel has been restored or do any number of things that would leave people without excuse. But he doesn’t.

The Role of Evidence

Mortality is a school for us to experience faith and to grow it’s tender shoots. As we attune ourselves to Celestial law and begin to partake of Godhood, those shoots strengthen, branch out and mature. But is it all just a matter of faith alone? No, the prophet Joseph Smith made it clear that “evidence,” and what he called the “stubborn facts” would circumstantially prove him a true prophet, 1 most definitely have a significant role in that process. The Lord gives us evidences to strengthen and confirm our testimonies, but also to make the claims of the Restoration credible and worthy of further attention by non-members. 2

Which brings me back to Nephi’s inscription. In the Fall of 2000 I was one of three people leading a group of nearly 40 Latter-day Saints along the Lehi trail. We began in Jerusalem, then descended into the Arabah wilderness, traveling south until we reached the Red Sea. We next flew south to Yemen to pick up the trail. After visiting the Nahom tribal area we drove in convoy to the ancient ruins of Marib, the legendary city of the Queen of Sheba thousands of years ago. And there, in the midst of the desert, an unexpected and most extraordinary event took place. 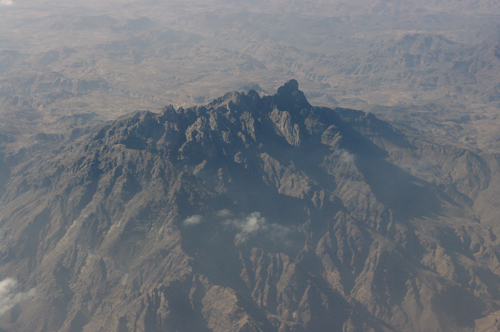 The mountains of Nahom, Yemen.

Some time earlier, a series of museums in Europe began exhibiting a collection of treasures from Yemen’s past. One of the items in the catalog reported an inscription on an altar that had been excavated at the Barán temple in Marib. I had been to the site years earlier. There was little to be seen then other than five and a half very tall pillars standing above the sand on which local boys would pose for pictures. It was a desolate place. A German team had unearthed the entire temple complex including the altar, dated to around 600-700 BC. What was significant was that the altar inscription named a donor who was the grandson of a man from the Nihm tribe.

We already knew that the Semitic consonants NHM referred to a tribal area that seemed likely to be the place called Nahom, where Nephi’s father-in-law, Ishmael, was buried (1 Nephi 16:34). I had spent years documenting the name on old maps and writings back to within a few hundred years of Nephi’s day. Always the name was in the same location.

A small notice about the altar find had gone out to the LDS scholarly community. 3 I’d read it with great interest but some frustration. The catalog photograph of the altar did not show the actual part of the text that mentioned Nihm and the exhibit would be touring Europe for several years. It seemed that learning more would be a long way off.

Not long after arriving in Marib our group began visiting the spectacular remains of the past, beginning with the famous Great Dam. From there we went to the nearby temple of Barán where the altar had been recovered. For me, it was hard to reconcile the carefully excavated and restored complex with what I remembered. It was only a few minutes later that we realized that a stone altar stood a short distance away, one that looked the same as the altar in the catalog. Excitedly, several of us began to examine it. Around 26 inches high, a 3 inch high band of South Arabian script encircled it. To see an almost identical altar was something that exceeded our expectations, but the best was still to come. 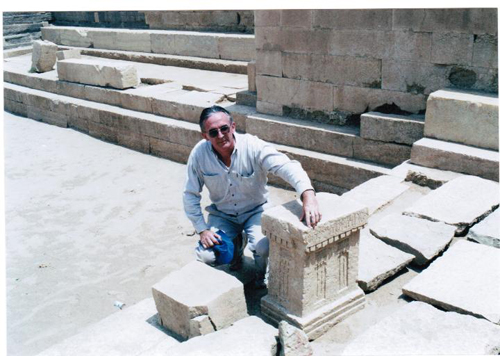 Author pointing to the characters for NHM on the second altar at the Barán site in Yemen, September 12, 2000.

We had hours of desert driving ahead of us to our overnight stop, so time was short. We hurriedly took some photographs and as we sent for a tape measure I asked our Yemeni guide if he could search the inscription for any mention of NiHM. Unbelievably, he quickly picked out the characters for the name, which I copied down. Stunned, we had our photographs taken with the altar and then it was time to leave. On board the bus we announced to the entire group what had happened and told them that they had probably just been a part of a significant event.

Such it proved to be. I returned to Yemen a few weeks later and secured permission to fully document the altar and the other structures. I found that around 20 altars had been recovered at the site and amazingly, amidst a cluster of damaged altars hidden behind a wall, sat a third identical altar. The donor of 3 altars with the same text was surely wealthy. Over following months one of the world’s leading authorities on early Arabia, Professor Kenneth Kitchen in England, provided us a more accurate translation of the inscription. 4 Other scholars helped refine the dating and understand the context.

For the first time, a unique Book of Mormon location had been plausibly located in the right location and period. As the profound implications of this discovery began to be appreciated, the Ensign and Liahona magazines reported the find with a photograph of the altar 5 and it was mentioned in the April General Conference of that year. The following year saw the release by Oxford University Press of historian Terryl L. Givens seminal work, By the Hand of Mormon: The American Scripture that Launched a New World Religion, in which the altar find was described as:

Found in the very area where Nephi’s record locates Nahom, these altars may

of the Book of Mormon.

No, the altar inscriptions were not carved by Nephi, but they vindicate his account in several spectacular ways. They confirm what Nephi said – there WAS in fact a place already called NHM dating to before the Lehites traveled to Bountiful.

The name itself, extremely rare in Arabia by the way, carries associations with the account of Ishmael’s death and burial and the place lies adjacent to the largest known ancient burial site in all of Arabia. The location perfectly fits the account. Furthermore, the only fertile coastline in Arabia lies almost directly eastward of Nahom, just as Nephi noted (1 Nephi 17:1). None of this information was known in 1830.

A decade has now passed since that unexpected day in the desert at Marib. The ripples from that day continue spreading outwards. If an inscription claiming to be written by Nephi had turned up somewhere, I could not have been any more thrilled than I have been to witness this marvelous development. As predicted, Truth is coming forth out of the earth. 7

2. An excellent summary of the roles of faith and evidence is John W. Welch, “The Power of Evidence in the Nurturing of Faith,“ in Parry, Peterson & Welch, eds. Echoes and Evidences of the Book of Mormon (Provo: FARMS: 2002): 17-53. This is also available online through the Maxwell Institute at https://maxwellinstitute.byu.edu, under “publications.”