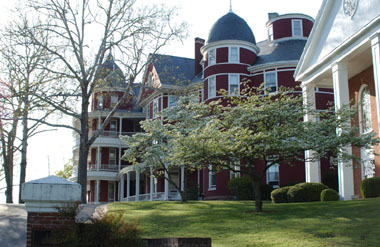 Sometimes doesn’t it seem as though Mormons don’t know how to retire?

Some folks seem never to have heard that you won’t wither up and die if you take a few years off to get sand on your feet and read some books and take a cruise or two.

Many Saints find ways to work as hard as ever after they retire, they just don’t get paid for it.

We all know about missionary couples, temple workers, and others who serve in the official Church.

But there’s a group of LDS college professors who, having retired from the publish-or-perish world of university life, have heads stuffed full of knowledge they are still bursting to share.

There are also professionals in other fields who have acquired a lifetime’s experience in fields that students are studying to join.  These retirees aren’t looking to start a new career in teaching, but they’d love to have a chance to pass along what they’ve learned to a few years’ worth of students.

Particularly when those students are young Latter-day Saints who want to know how to keep their values and spirituality alive in whatever profession they’re studying to join.

A School in Another Valley

For the past nine years, some of those retired experts have packed up their bags and headed for the Shenandoah Valley of Virginia, where, nestled up against the Blue Ridge Mountains, a Mormon university is growing and gathering strength.

Southern Virginia University is at the brow of a hill at the north end of the town of Buena Vista (pronounced byoo-nah vis-ta; Virginia is not California).

Only a few miles away, in the town of Lexington, the venerable Washington & Lee University carries on its proud tradition.  And now an ever-growing number of LDS students is taking part in a different, but no-less-proud tradition, an intimate four-year liberal-arts college with an LDS viewpoint.

The volunteers who come to serve at SVU find themselves surrounded by students who chose to come to the kind of school where you can know the entire faculty and staff personally, where no one is ever lost in a huge class, and where every subject can be related to Mormon life.

Wherever the Need Is

Burt and Sandy Ellsworth learned about SVU when Jerry and Beverly Martin moved in next door to them.  The Martins had just returned from SVU, where Jerry volunteered as the university physician.

The Ellsworths made a visit to the SVU campus, and they were hooked. “It was very charming and we knew that we wanted to be involved here.”  They came to SVU in August 2004, and volunteered to serve wherever they were placed.   They had already spent a year volunteering at the Joseph Smith Academy in Nauvoo, so they knew that in a start-up school, you do whatever is needed. 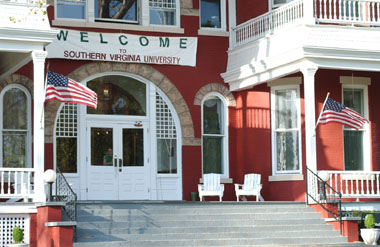 Burt, a retired engineer from the California State Health Department, was asked to share his engineering experience and work with SVU’s Physical Facilities Department in creating a digital map of all the utilities on the 114-year-old campus.

Sandy works as a receptionist for the administration’s front desk and as a cashier at the SVU Bookstore.  “Volunteering here is a great way to feel useful, she says, mingle with students and great faculty members.  I love it.  The people here are intelligent, warm, friendly, and we’ve become such good, close friends.”

What an SVU volunteer does will depend on each volunteer’s individual talents, but currently volunteers do everything from teaching to administering health care, from working in a campus office to helping students with sewing projects.

At Least the Lunch Is Free

Ron Carter is a volunteer professor and author-in-residence.  It’s nice to do something just to do it, he says, and feel like you’re making a contribution.”

His wife, LaRae Carter, is also a volunteer professor.  “Through volunteering, we don’t have to sit in the rocking chair.  Our talents are not dead.  We can use them, and share them, at SVU.”

Just because they aren’t paid a salary doesn’t mean that SVU doesn’t appreciate them.  Some volunteers live free of charge in off-campus townhouse apartments maintained by the university.

And volunteers can also get meals for free at the campus cafeteria, which specializes in Southern cooking. “I really enjoy not having to prepare meals,” says Nanette Nelson, who puts in a full day of volunteer service, between serving in SVU’s Business Office and the administration’s front desk. “It’s going to be very hard to go back to cooking again.”

After Joseph Nelson retired from his practice as an orthopedic surgeon, he and Nanette served a two-year mission for the Church in Ukraine.

So what next?  With SVU’s six hundred students and LDS environment, says Nanette, “coming to SVU just felt like the right thing to do”.

“Young people are full of life and fun to be around,” says Dr. Nelson.

The Nelsons arrived in September 2004. Nanette remembered, “We just fell in love with the school; there’s such a great feeling here.” Dr. Nelson now serves as the new University Physician, having taken the place of Dr. Jerry Martin.

As the University Physician, Dr. Nelson treats students, faculty, and staff for minor health problems.  “I used to spend my days seeing patients that were referred to me, with problems that were a lot more serious, and required much different treatment than the people I see now,” he says.

“Now my time is spent talking to patients, sometimes ordering lab work, diagnosing, then advising the patient, or making arrangements for them to find specialized care. It’s mostly family-practice type of work.  It’s fun to talk to people and treat them.  Low-pressure work for a physician in a beautiful area, and I’m here with my wife, without a lot of other responsibilities.”

It almost sounds as though they were retired.  Except for the part about putting in a full day’s work, every day.

From the Big City to the Mountains

LaRae Carter remembers when she and husband Ron first heard about SVU in 1996, when the old women’s college changed over to being an LDS school.  “I was excited and pleased to think the LDS people could organize another university in the country, she says.

An accomplished musician and teacher with a DMA (Doctor of Musical Arts) from BYU, LaRae Carter spent her career as an award-winning teacher of music in Los Angeles, California, where husband Ron worked as a lawyer.  After Ron’s retirement in 1998, the Carters moved to Utah, and LaRae continued teaching for the Park City schools.

With her experience and ability, attested to by many awards, it’s obvious why Southern Virginia invited LaRae to join their faculty.  Ron recalls, “They wanted her to teach music, and they wanted me to drive the car.”

He got more than he bargained for.  The author of the historical-narrative series “Prelude to Glory,” based on stories of the American Revolution, Ron Carter was excited to move to Virginia, so he could more readily accept invitations to speak about his work at schools and universities on the East Coast.  He barely had time to recover from his first string of educational lectures, before SVU asked him to instruct history classes and serve as a teacher for the CES Institute program on campus.

Ron happily accepted the appointment. “I enjoy teaching this youngest generation of Americans about the history of their country. There is so much of it they haven’t heard before. It’s a thrill to open their minds up to it.

“As for the New Testament, the life of Christ, well, you can’t get tired of teaching that.”

One of the main reasons that volunteers at SVU feel that way about their work is the students.  “They’re my favorite part of working here, said Ron Carter.  They’re positive and upbeat.  I believe they have strong testimonies of the truth of the gospel, and the atmosphere that creates just makes it pleasant to be here.”

We’ve taught for decades, and I’ve loved doing it, says Card.  But nagging at the back of my mind was the frustration that I was helping improve the writing skills of students who shared relatively few of my own values.

Which is why teaching short-story- and novel-writing courses at SVU was so satisfying.  The talent is there, in the normal proportions, says Card.  And as they get better at storytelling, I can rejoice doubly, at their personal growth, and at the way their stories will make the world at least slightly better.

Is This How You Want to Retire?

Currently, there is a great need for volunteer service at SVU.  The school does not receive any Church subsidies.  There are donors who help keep the tuition costs low (compared to tuition rates at other private liberal arts colleges), but every volunteer teacher and staff member allows each dollar of the school’s budget to stretch farther and accomplish more.

As Orson Scott Card says, “A year at SVU at this stage of the school’s history is like serving for a year at Brigham Young Academy in 1885.  You’re making a difference, right at the beginning of something that will outlive us all.”

All vacant positions at SVU can be viewed online at https://www.southernvirginia.edu/Employment/.

SVU is seeking volunteer faculty to teach in one or more of the following areas:

There are also positions available in construction management and engineering.

To apply for volunteer service, or for more information, contact: