Searching for the Jaredite City of Lib

Searching for the Jaredite City of Lib
By V. Garth Norman

Note:  The Ancient America Foundation (AAF) is pleased to present AAF Notes: a series of research articles by scholars of Book of Mormon culture and history and reviewed by AAF editors. Visit our Web site: https://www.ancientamerica.org.

“Welcome to the World of the Book of Mormon!”

The above announcement is conceivable in the not too distant future with advancing Mesoamerican and Book of Mormon historic archaeological research.  That landmark goal will be reached only if and when a specific Book of Mormon city is pinpointed with the record in the proper place, time, and culture, required by the text, and the city’s name is recovered from the ruins.  Full confirmation must of course rest on similar discoveries of neighboring puzzle pieces in Book of Mormon historic geography exploration.  No single discovery can stand in isolation.  It is gratifying to see speculative searches at long last progressing toward genuine exploration discoveries that are bringing the Book of Mormon world to light.

Identification of the city of Lib is realistically possible in my view from its specific location described by Moroni, if we can understand his words correctly.  Without question, we must start with specific identifiable locations based on the text.  Moroni seems to know where Lib is located, because he adds a descriptive detail that means nothing to the text, unless his geographic description is identifiable.  I submit that the text will become clear when we locate Lib’s city.  Let’s look at the text details.

Lib’s people succeeded in killing the poisonous serpents that were blocking passage into the wilderness filled with wild animals across the narrow neck.  Mormon also identified that wilderness as the Nephite land Bountiful, which was filled with wild game of every kind (Alma 22: 31), doubtless tropical.  We previously identified Bountiful in the state of Tabasco, and showed evidences for that name meaning “bountiful” among the indigenous people, and its survival from the two Hebrew words for bountiful: Tob and shoa (Norman 2004).  Lib’s people crossed into that wilderness and built a great city by the narrow neck of land.  Moroni then adds that the location was “by the place where the sea divides the land” (Ether 10: 19-20).  What does that mean?  No other reference to the narrow neck of land in the Book of Mormon has that description, so it has to be a specific feature by the narrow neck of land within the wilderness where the sea literally cuts into the land.

We now know that one of two great Olmec cities from Jaredite times, San Lorenzo and La Venta, located on the Isthmus of Tehuantepec about fifty miles apart, qualify. (See Map.) 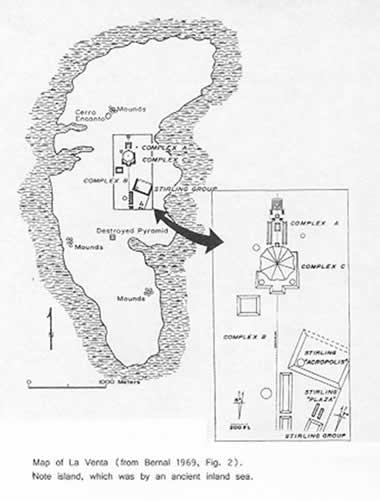 Considering Lib’s great city ruled his empire, there are no other possibilities within this limited territory.  The question is whether archaeological remains and inscriptions can identity Lib and his ancient Near Eastern cultural roots, which will be considered in Part 2 of this paper.

I previously speculated in a 1984 paper that the division place could mean the wide mouth of the Rio Coatzacoalcos affected by Atlantic high tides, but there is no big Olmec city there.  I then speculated that San Lorenzo located 40 miles upstream by a river island could be the place, but it is a river and not the sea that divides that land, so there would have to be an error in translating the river as sea to qualify.  Archaeologically, San Lorenzo qualifies in every respect for Lib’s city.  It dates to the right time.  Lib in the 14th generation is in the mid generation of Jaredite history around about 1400 to 1200 B.C., when San Lorenzo was built.  Political change reflected in the excavation record also fits Jaredite history.

The geographic drawback is that San Lorenzo belongs to the densely populated Gulf Coastal Olmec region of southern Veracruz.  Note the 8 other cites within 25 miles, and others farther northward, where “the whole face of the land northward was covered with inhabitants (Ether 10:21).  San Lorenzo is on the major trans-isthmian communication route along the Coatzacoalcos to the Pacific side that doubtless was never closed to traffic for any length of time.  I had also speculated that the large lagoons on the Pacific coast is a place where the sea divides the land, but there is no big Olmec city in that region, and no tropical forest leading into the land southward.  Besides, the evidences favor that Tehuantepec plain as being the “narrow pass.”

But where at La Venta is there a distinctive feature where “the sea divides the land?”  While researching for this paper, I turned to a La Venta excavation report (Drucker 1952).  As I read the Geographical Setting section, I was stunned by something I had never seen nor heard before.  I knew La Venta was on high ground near rather extensive swamp lands like other cities in the vast coastal flood plain of Tabasco that becomes inundated and impassible during the rainy season from the Tonala and Grijalva rivers.  What I did not know as I read brought Moroni’s description into broad daylight.  It is so significant that it deserves quoting.

The traveler in the region cannot but be impressed by the sudden change from the rolling red earth hills of Minatitlan which are a gradually descending extension of the foothills of the Tuxtla Mountains, and the high sand dunes around Puerto Mexico (Coatzacoalcos), to the flat swamp plain, just barely above sea level, that extends for miles to the eastward, along the coast.  This whole swamp zone must have been formerly open sea – a great bay that gradually silted in.  Oil geologists working in the La Venta zone have told me that testing and drilling operations show a layer of almost a hundred feet of swamp muck extending downward from the present surface, with, here and there, beds of marine or brackish-water shells.  Potsherds and fragments of figurines often come from considerable depths in this muck.  We can be certain that these objects do not represent ancient horizons buried by modern swamp, but are undoubtedly things lost overboard from canoes at a time when there was more open water than at the present day.”  (Drucker 1952: 4)

Geological studies in the region show a land subsidence in the La Venta district as opposed to a rising farther eastward along the Tabasco coast.  Also, a broad ancient channel from the Rio Grijalva use to drain past La Venta to the Gulf Coast, which must have expanded the inland sea during the rainy season, adding to waters from high tides, and building up siltation deposits through time, which may have contributing to the river channel rerouting eastward.  I am now convinced that La Venta, the southeastern most great city of the Olmec, literally built in “the place where the sea divided the land,” is where we must look to identify the city of Lib, which will be considered further in Part 2 of this paper.

Norman, V. Garth.  “Where was the Land Bountiful?  Possible Place Name in Mesoamerica with a Biblical Prototype.”  AAF Notes, www.ancientamerica.org.  2004.

Copyright 1999-2002 Ancient America Foundation. This message may be forwarded

AAF Notes or utilize the AAF order form, visit https://www.ancientamerica.org and click “Contact us”. Refer, by e-mail, comments or questions to [email protected]