Halloween is the time of year for creepy, crawly, spooky, and fun picture books.   Here are some perfect books full of pumpkins, skeletons and ghosts. 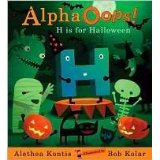 Alpha Oops! H is for Halloween, by Alethea Kontis, and illustrated by Bob Kolar, is the hilarious sequel to AlphaOops! The Day Z Went First, by the same author and illustrator.  I loved the first book for its creative aspect of an alphabet book that doesn’t go in the traditional alphabet order, and this book doesn’t disappoint! In fact, it might even be better because it’s so innovative.  “Z” begins by saying that “H” needs to kick things off and letters begin showing up on stage in their cleverly cloaked costumes that go along with their initial sound. The hilarious asides exclaimed by letters off stage are interesting, and even unusual, unknown words that are defined by the text. The letter “B” continues to try to find the right costume throughout, but here’s my word for “B” and this book: brilliant!

Bones, by award-winner Steve Jenkins, will have you looking at your hands and feet much more closely as the ever brilliant author/illustrator enlightens all to the skeletons of the world. There are skeleton parts of femur bones, rib cages and even a double page fold-out of a snake skeleton. The last double page fold-out is of the most important skeleton: you. The cover of a large human skull heads readers in the right direction. This is a definite Caldecott candidate!

Trick or Treat, Old Armadillo, by Larry Dane Brimner, and illustrated by Dominic Catalano, evokes a southwestern feel throughout, along with text with intermittent Spanish. Old Armadillo is awaiting his friends to come trick-or-treating to his house in their scary costumes. But they are in for a surprise when he opens his door. The darkened pastels emit a Halloween southwestern flair. Look for the cactus with a cut-out jack-o-lantern face. You’ll find a glossary for the Spanish words in the front of the book.

Big Scary Monster, by Thomas Docherty, is a teachable story about a big blue beast who likes to scare all of the smaller animals on his mountain. When he decides to go down the mountain to find others to scare, he learns an important lesson.  The bright watercolors fill the pages, as does the large blue monster.

Always Listen to Your Mother, by Florence Parry Heide & Roxanne Hide Pierce, and illustrated by Kyle M. Stone, has a pleasing child who obediently asks his mother if he can go meet the new neighbors. He soon discovers that this ghoulish-looking new neighbor and his mother have different ideas of keeping a house clean. The mixed-media illustrations brilliantly and humorously show the extreme differences of these two boys.  The contrast in both boys’ living conditions makes for a very funny story.

Scarum Fair, by Jessica Swaim, and illustrated by Carol Ashley, is a list of witty and somewhat chilling poems that are geared for ages eight and up. This rhyming fair includes a poem about “deadbeats” who play in a band while “the ghoul on the sax de-composes”. The illustrations of pen, ink and acrylics showcase beasts you’re unlikely to meet.

If You’re a Monster and You Know It, by Rebecca and Ed Emberley, has their trademark brilliant colors against a black background. This book is a take-off of the traditional song of “If You’re Happy and You Know It,” but the subject is a monster and there are some of the most fantastic and inventive beasts imaginable! By the end of this book, if you’re not singing along, you’re just not a monster!  You can also download the song and sing along.

Hubknuckles, by Emily Herman, and illustrated by Deborah Kogan Ray, was first written back in 1985. This somewhat frightening story tells about a family who awaits the ghost, Hubknuckles, who appears every Halloween. The first-person narrator, Lee, has decided that the ghost is really her parents. But when she goes out to see the ghost, she’s in for a surprise. The graphite and pencil pictures give off an illusion of a ghostly appearance.

The Patterson Puppies and the Midnight Monster Party, by Leslie Patricelli, takes on the ever-constant problem of children waking in the middle of the night because they are scared. Little Petra is scared every night until the rest of her family come up with a solution. The vivid acrylics make this family of dogs come to life in an anthropomorphized state of human characteristics.