Hunting for Elephants in the Book of Mormon | Meridian Magazine

Hunting for Elephants in the Book of Mormon 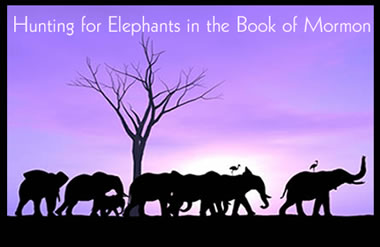 Editor’s Note:  The following article is courtesy of FAIR, a non-profit organization dedicated to providing well-documented answers to criticisms of LDS doctrine, belief and practice.  FAIR can be found online at www.fairlds.org.

An “anachronism” is something that doesn’t fit the time or place for which it is claimed. For example, a tale of King Henry VIII watching television would be anachronistic (wrong time frame).

The Book of Mormon has frequently been charged with containing numerous anachronisms. The six categories are: (1) fauna (animals); (2) flora (plants/ vegetation) and textiles (silk and linen); (3) warfare; (4) metals; (5) pre-Christian Christianity; and (6) compass, coins, and other miscellaneous items.

Most of these categories have some similarities. In these instances there is the possibility that (a) such things were once in the Americas but the evidence has either disappeared or has not yet been found, or (b) Book of Mormon labels are based on the re-labeling of New World items with familiar Old World labels. In this article I deal with the first category (fauna, or animals) and a general overview of why supposedly anachronistic items may appear in the Book of Mormon.

A number of critics claim that since the remains of Book of Mormon items have not been found in pre-Columbia Mesoamerica sites that these things did not exist. This charge, however, commits the logical fallacy of arguing from ignorance or silence. Since not everything that ever existed in Mesoamerica has been found, we cannot positively say that something did not exist.

It must be understood that the lack of evidence is not evidence. Until the middle of the twentieth century, for example, the best archaeologists were convinced that the camel was unknown in Egypt until Greek and Roman times, despite the mention of camels in the Biblical account of Abraham (Gen. 12:16). Today, however, scholars realize that the camel continued to be used in Egypt from prehistoric to present times.1

Similarly, despite the many references of lions in Israel as noted in the Bible and in a number of ancient and relatively modern texts (up to the sixteenth century A.D.), the absence of lion’s bones perplexed Bible scholars.  Such texts mention lions more than a thousand years after the Book of Mormon mentions the “horse” yet until just a few years ago, there had never been a single discovery of lion bones in the land of Israel.2

The Huns of Central Asia and Eastern Europe present us with another case of disappearing remains. According to written records, the Huns must have had hundreds of thousands of horses — perhaps up to ten per warrior — yet there are virtually no horse remains in the entire empire of the Huns.3

Lastly we have the example of the elephant in western Asia. From written records we know that elephants roamed the temperate lands of Syria and the upper Euphrates well into the Middle Ages. The Pharaohs used to hunt them for sport. Yet now, they have disappeared with virtually no trace.4

Through the years, in various cultures, people have renamed unfamiliar things with familiar labels. The Greeks, for example, when first encountering the hippopotamus in the Nile River, renamed it “river horse.”5

Likewise, when the conquistadors arrived in the New World both the natives and the Spaniards had problems classifying new animals. At first, the lowland Maya named the Spanish horse, “mule,” and ass with the name of the closest native equivalent — the “tapir.” To the Spaniards, however, the tapir resembled a 700-pound pig. The European goat was called “a short-horned deer.” 6 When the Spanish introduced the European horse, some of the Amerindians simple called them “deer.”7

Misnomers and Other Namesakes

Some critics have claimed that dogs and bees were also unknown in the ancient New World. Current research, however, suggests that both were present18 (and the bee is never mentioned in a New World setting in the Book of Mormon).

For more details on this topic see https://www.mormonfortress.com
or https://www.fairlds.org.   Written by Michael R. Ash for the Foundation for Apologetic Information and Research (FAIR), Copyright © 2003. www.fairlds.org